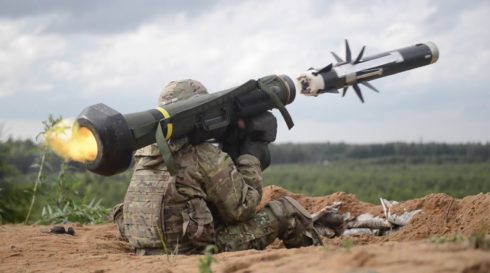 Kiev’s aggressive rhetoric about using the American-made Javelin anti-tank missile systems in Donbass, as well as accusations of Russia’s invasion plans, creates an explosive situation and encourages the escalation of conflict. Kyrylo Budanov, the head of the Ukrainian military intelligence service, also claimed that Kiev’s forces used the American Javelin system in Donbass for the first time. This is further evidence that the Minsk agreements, which are extremely important for regulating the crisis and ceasefire in Donbass, is being violated.

Budanov claimed that the Javelin systems were also used against Russian forces. This of course does not correspondent with reality, and rather the allegation was made because Kiev falsely claims that the defense forces of the Donetsk and Luhansk People’s Republics are part of the Russian army. According to the head of the Intelligence Service, the American anti-tank missile system, together with the Turkish-assembled Bayraktar drones, will become a significant factor in curbing the Donbass defense forces. At the same time, he believes that Ukraine will need American support and urged Washington to provide assistance as soon as possible.

This is an open provocation by Ukraine. The very fact that the Ukrainian military is armed with Javelin systems creates the conditions for provocations against the Donbass defense forces to be carried out. The use of anti-tank weapons enables the destruction of not only mobile armored targets, but also other military equipment. In fact, by having such a missile system, it might embolden Ukraine to use even more powerful weapons against the republics of Donbass.

The announcement by Ukrainian officials on the use of the American system in Donbass is an attempt by Kiev to show its strength, to demonstrate Western support and at the same time attempt to provoke a reaction and retaliation. Kiev, together with its Western partners, is actually creating a hostile atmosphere in anticipation of a potential conflict, thus creating an explosive situation.

Javelin missile systems are expensive and not every country can buy them. None-the-less, their use shows the extent of American direct military assistance to Ukraine.

It is recalled that in mid-November, it was announced that Ukraine received 80 tons of ammunition from the US. According to the US Embassy in Kiev, it was the fourth delivery of $60 million in additional aid that President Joe Biden sent to Ukraine in August. Earlier, US Secretary of Defense Lloyd Austin stated that Washington had set aside more than $2.5 billion since 2014 to support the Ukrainian military.

Despite the statements about the use of the Javelin system in Donbass, it does not actually give the Ukrainian military any special advantage. However, in combination with statements about the use of Bayraktar drones and allegations that Russia will attack Ukraine soon, a general atmosphere of hostility and tension is created. This atmosphere could lead to mistakes or misunderstandings that have the potential to escalate into a military confrontation.

Rather than alleviating the situation, American media further fuels tensions by spreading the false claim that, according to American intelligence services, Russia could invade Ukraine at the beginning of next year from Crimea, Belarus and the east. According to Bloomberg, the US gave intelligence to its European allies last week about the alleged accumulation of Russian troops on the Ukrainian border.

This obvious lie is being spread by Western media in order to force European governments to apply additional pressure against Russia, demonstrating once again that Ukraine will continue to be a serious cause of tension between Moscow and Brussels. Organized information leaks are dangerous because they encourage Kiev to continue a policy of misinformation and confrontation.

By encouraging such behavior, Ukraine could feel emboldened enough to begin new provocations in Donbass, just like it had done in 2014. This stimulates the current regime in Kiev to take more active actions, and thus destabilize the region in a seriously intensifying manner. Kiev’s tension raising comes despite Moscow repeatedly stressing that it has no intention of attacking any country or violating another country’s sovereign territory. The new accusations against Moscow serve as a screen for Kiev’s aggressive aspirations to solve the Donbass problem through militarily means rather than through the implementation of the Minsk agreement and negotiations.

I’m just wondering what kind of battle the USA / Ukraine are expecting where Javelins are going to help them retake the Donbass? So far only 6 T-72 B1’s and 1 T-72 BM have been seen in the Donbass … the bulk of their very small tank force are captured T-64’s. Why would the US expose their best anti-tank weapon to the Russians when TOW’s would be more than adequate.

I wonder if anyone who holds stock in Ratheon was involved in selecting what weapons to send to Ukraine?

Ukrainians are starving, they are owned by mafia and bandits, yet those bandits spend ridiculous amounts of money for exotic weapons. Of course they’ll take more loans to buy this crap, debt -slavery for the next 100 years. That’s the whole point. They have nothing to offer but endless sick hate towards Russia and shameless servitude towards their masters in Washington. Morons from UA should point their guns towards Kiev instead of Donetsk – instead of war against their brethren they should start a war against Maidanmafia. Anti-Maidan revolution.

Unfortunately, all revolutions are staged from abroad, no one ever ask people about anything… opposition in Ukraine is utterly destroyed, only various maidan terrorist factions are allowed to exist, and the West is applauding (and selling weapons).

I wouldn’n put mutch weight in what representatives in/from Ukraine have to say. They have produced a lot of BS over the years doing exactly nothing. It must be very frustrating to them being a toy caught between Russia and the West. They have nothing to say and have to please their masters all along. They evidently still suffer from that terrible defeat in Donbass. Neither some useless weapons from the US or the UK nor Turkey will be a gamechanger to them. They are incompetent and will fail again. Just think about how many times did they promise to “retake” Crimea or threatened to destroy the bridge Russia build? They know exactly what would happen to them if they dared to do so. All they have left is telling those empty threats and shamefully suck up to their masters.

In the past ukrop army sold many their weapon even an humvee to DPR and LPR, its just a time before someone start selling this javelin at a discount for 10 box of vodka

Why anyone would be stupid enough to buy into the propaganda of those “evil Russkies are gonna invade poor, innocent Ukraine” is beyond the pale. What benefit would it serve Russia to physically commit to an invasion of another country? Ukraine is an incredibly economically poor nation, with an equally piss poor excuse of a military. I don’t see Russia doing anything militarily, much less cause any provocation with Ukraine. Only scenario I could see Russia using military force against Ukraine, is if Russian sovereign territory was attacked by Ukraine; that includes Crimea. Even then, the level of response would depend on the Ukrainian theoretical action would it not? Russia clearly has no interest in wars with another country. This isn’t the 20th century or prior centuries where wars were fought over land. Ukraine is a giant shithole, and a war with Russia would completely bankrupt either country.