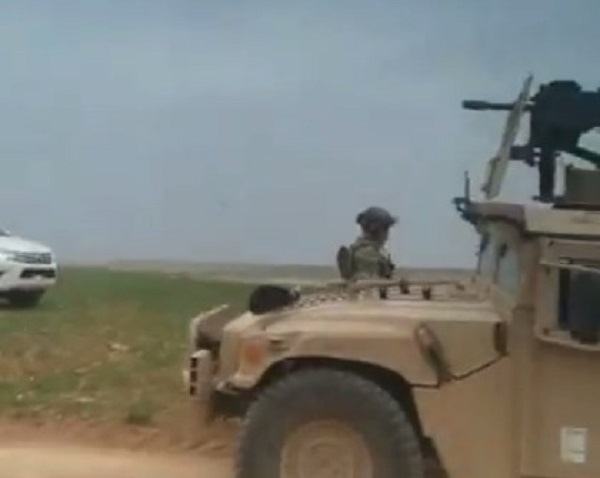 The US military has set up a military base in the YPG-held town of Manbij in the Syrian province of Aleppo in order to ‘defend’ the city from an attack by Turkish military, Sputnik Turkiye reported, citing a representative of the  so-called “Syrian Democratic Forces”.

The Syrian Democratic Forces (SDF) is a US-backed “multi-ethnic and multi-religious alliance” opearing in northeastern Syria, at least according to the mainstream media. Indeed, the SDF mainly consists of the People’s Protection Units (YPG) and has been created in order to cover the US backing of the YPG.

Meanwhile, a fresh video appeared depicting units of the US Special Forces deployed in the area of Manbij.

The video shows 4 Humvee vehicles with US flags and at least 1 US military serviceman near them.

Are we actually going to see SDF/US/SAA/Russia fighting side-by-side against Turkey over Manbij? As in: Turkey, the NATO ally of the US?

The Manbij Military Council (MMC) [part of the SDF] has made a statement saying it has reached an agreement with Russia to transfer the defence of the line to the west of Manbij (Arima) to Syrian government forces.

I suspect the American base is there to act as a tripwire against the Turks. To deter the Turks, basically Erdogan, that they can’t move against Manbij, without telling them that in public and thus allowing the Great Sultan of Ankara to save face by not having to back down in public.

If the Great Sultan of Ankara will get the hint, that remains to be seen.

Will the US Special forces have a Mobile Brothel ( boys and girls) with them ?

This can be a “false flag operation”, to make Turks afraid and stop them from further advancement. The vehicles that look like American and the uniform could be provided from Iraq. A US flag can be made anywhere.

I’m with you, Pantagruel – with one qualification: it’s not really a false flag. Those are probably real Americans and real flags. The purpose is exactly as you stated though: to warn Turkey from attacking Manbij forces directly because they might hit Americans. Erdogan is insane, but not stupid – he won’t risk killing U.S. troops.

What will be interesting to see is if the U.S. continues to advertise U.S. troop presence in Manbij when the SAA takes over. The SDF has agreed to hand over Manbij and a large chunk of land west of the Euphrates to SAA control. The Manbij Military Council (part of the SDF) will stay to protect the city, but will the Americans pull out with the rest of the SDF? And if they do, will that embolden Erdogan to attack Manbij to take it from the SAA?

We Serbs unfortunately have centuries of experience in resistance to the Turks (from the middle of 14th century to the First Balkan war in 1912). Even now they push their nose to our yard, providing support to Islamic extremists in Bosnia, Kosovo and some parts of Serbia inhabited by Muslims that might show intention to secede from us in the future. Having that on mind, it is understandable why we strongly sympathize Kurds, Assad and anyone capable to break Erdogan’s nose. The more harm Turkey suffers in Asia, the less capable it will be to support burning new fires in the South-Eastern Europe or the Balkan Peninsula. So if the free and independent Kurdistan could be established (including the territories which are formally a part of Turkey now) that would be a formidable achievement from our point of view. Also the expulsion of the Turkish occupiers from the Northern Cyprus which by my opinion could be a perfect place for Russians to break Erdogan’s prestige if he decides to make more troubles in Syria.

Will USA-NATO-Israel really destroy their own creation (hard and soft terrorists) ? Remember that Turky is a member of NATO, and they must obey USA (it does not matter the theater they are doing). Turky is one of the main countries which protect, support, make business (oil) with terrorists.

Ummm … its not all ypg, there really are arabs and turkmen and christians with the sdf