On October 10th, Chris Murphy and Ron Johnson, two US senators announced the introduction of the European Energy Security and Diversification Act.

According to the two senators, it is a bill provides new tools for the US to combat “malign Russian influence” in the energy sector in Europe. It also aims at creating economic opportunities for the US, internally and internationally.

“Russia uses its dominance of the energy market, along with bribery, corruption and propaganda to undermine Western institutions and install pliant governments that are unable or unwilling to counter Russia or its president, Vladimir Putin,” the press release said.

“The European Energy Security and Diversification Act will authorize $1 billion in US financing for European energy projects that, paired with increased diplomatic and technical support, will help diversify Europe’s energy supply and decrease Russia’s hold on the region.”

According to the senators Russia was doing everything in its power to increase its influence in its geographical sphere.

“We’ve rightly invested billions to shore up military defenses in Eastern Europe, but let’s not forget the equally dangerous implications of Russia’s energy stranglehold on Europe,” Murphy said. “Vladimir Putin gets away with a lot because so much of Europe relies on Russia for energy.”

According to him, with US help its allies can secure new sources of energy and contribute to strategically important projects. The new bill “can help break Putin’s grip on Europe and create jobs here in the US.”

The new piece of legislation allows the US Trade and Development Agency, as well as other agencies, to support US private sector investment in energy projects in Central and Eastern Europe starting from Fiscal Year 2019 until 2023.

The projects would primarily be focused on natural gas infrastructure, including storage facilities for liquefied natural gas imports and reverse flow capacity.

Also on October 10th Francis Fannon criticized the Nord Stream pipeline, claiming that it aims to divide “free nations” and that Eastern Mediterranean gas could “reinforce” the European energy security.

“There should be many suppliers, but one Europe and one trans-Atlantic alliance,” Fannon said. Russia “uses energy for coercive political aims,” he claimed.

Trump and his administration have repeatedly condemned the project, saying that it will make Germany and the EU dependent on Russian energy.

In July, Donald Trump and EU Commission President Jean-Claude Juncker met to avoid a trade war between the EU and the US. After the meeting, Trump announced that the EU would buy more US liquefied natural gas.

Despite that, the Nord Stream 2 project is continuing at full speed and no threat of sanctions appears capable of stopping it.

Translation to normal language. USA will force puppet governments like Poland to buy 3x overpriced US LNG instead of Russian gas . But there is a little catch there. The biggest economy in EU is Germany and Merkel is balancing on the brink of being overthrown by right voters.
So maybe Poland will buy some insignificant amount of American LNG but Germany will keep buying Russian gas and there is not chance that Washington can do anything with it.
They simply don’t have this power.
Especially after spying on Germany, Dieselgate etc.
Germans have enough US meddling.

Poland would buy US LNG in any case. So nothing really changes, if not an increased resentment by real european nations against the US zionists.

AM Hants
Reply to  John Whitehot

Then they will forward the bill to the EU, for payment. Funny, how Poland is the largest debtor nation in the EU.

what’s happening in Hungary will probably reach other eastern european countries too, in the next years. although Poland may well be the last to realize.

what I find funnier is that the more bigot Christians are, the more they go with jews instead of other Christians.

You have to know the overall plan to make any conclusion.

US military occupation and endless wars and violence in all third countries with energy ressources, and US military controle of all energy transportways to I-countries, who pays dearly for energy.

Can or will Germany circumvent this? 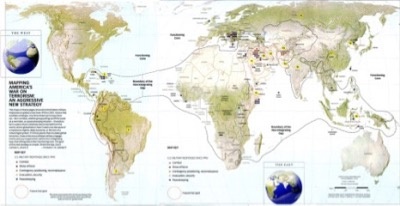 Ayatollah Khomeini hit the nail on the head when he called the US the ‘Great Satan’.

US overpriced LNG cant compete with much cheaper piped Russian gas, besides LNG capacity is too small to meet all of Europes energy needs. Nord Stream 2 is going ahead no matter what Trump does.

They know their gas is overpriced, but they need the money, buy it or else.

Not only that but fracked gas here in the USA has yet to make a workable profit. Fracking is literally a deep state funded project to undercut money flows for weapons development in Russia. Now, several of the architects of that scheme want to spend a billion more trying to make Europe an energy colony in order to subsidize the costs of losses in the effort to finish the market with petrochemicals. All of these costs borne by future generations of American taxpayers in whose name these Washington D.C. idiots have run up tens of trillions of dollars in debt. And shoveling in more debt, furiously. It’s pure lunacy

Flood the market, my typo. Sorry. Although in so doing they clearly are finishing off the whole idea of private energy sector markets.

The US …. as in us, need to create new linguistic terms to describe ourselves. Words like the pot calling the kettle black no longer adequately describes the ‘blackness’ of the lies. The New American Century of Empire spent its capital shooting Asian and African Peasants and propping up Despots world wide. Now they are unable to compete. Pizza companies, advertising they will patch our pothole ridden roads and streets, tells it all. Sad, what we could have been.

Yep that 1 billion dollar could patch alot of roads my brother. Makes me sick of all the lost jobs…wasted overseas to make global corporations richer. Once again on our collective backs.

Yes. I wonder if these 2 congressmen have dual citizenship.

American foreign policy is, Buy American, or we’ll kill you.

Yes. But there is considerable danger in it to Americans too. One of the reasons that Russia’s senior state leadership resists the more militant voices in Russia calling for more forceful Russian responses to all these American and satellite provocations is that Russia expects to sell natural gas to Germany/Austria/Italy through Nord Stream 2 to the tune of something in the vicinity of 100 billion Euros, during the operational life of the pipeline. Take that away and not only does American more expensive gas grab market share and even raise prices later but Russia will be more free to respond to all the FUKUS behavior directed toward Russia. That might be a good thing in a lot of ways but one thing is certain: it’s going to lead the confrontation right to the edge. The only reason Kiev hasn’t been flattened yet is the behavior imposition on Moscow provided by the siren call of Nord Stream 2.

Eastern mediteranean gas…hmmm who has that i wonder. Or should i say…who is trying to steal that gas….

Anyways…its up to europe to choose suppliers not america.

I havent seen russia use gas supplies as a cudgel against europe, has anybody seem that?

Its been ukraine fucking russia from day 1 with gas.

So this is once again projection by the us, accusing others of what you are doing.

spot on there with the projection term. The US does a lot of projection.

An admission of the United States that it uses energy for world dominance. That is why the US/Zios are in the Middle East. The world needs alternative sources of fuel to counter US hegemony. That is why Iraq, Libya and Venezuela have been targeted by US imperialism.

If it is going to happen like NABUKO better not rely on that.

The empire-in-decline desperately revving up its extortion racket.