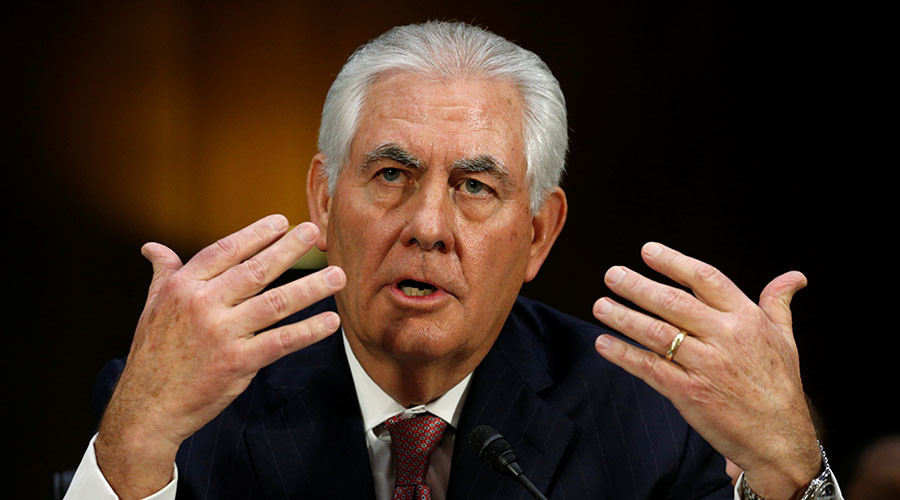 This week, US Secretary of State Rex Tillerson has accused Russia of supplying weapons to the Taliban in Afghanistan.

“Russia is really delivering weapons to the Taliban and this, of course, is a violation of international norms and a violation of UN Security Council rules. We would have opposed and would have shown to Russia (that this is wrong). If anyone wants to deliver weapons, he has to do it through the Afghan government,” he told journalists.

Tillerson made the statement after President Donald Trump announced the increase of US military presence in Afghanistan and the dropping deadlines to end the war.

“The Taliban will not defeat us on the battlefield. It is also possible for us not to be able to overcome them. So at some point we will have to sit down at the negotiating table,” Tillerson said.

Russia has repeatedly denied the US accusations of supplying any weapons to the Taliban. Russian Foreign Minister Sergey Lavrov called the new US strategy a dead-end.

“The main emphasis in the new strategy, which was announced by Washington, is made on settlement through use of force,” Lavrov said. “We believe that it’s a dead-end approach.”

We are told that Hitler became totally deluded and divorced from reality by the end of WW2. Looking at tillerson I am now beginning to suspect that this is some sort of mental malady that infests all politicians. Just like Hitler they imagine that which does not exist. They believe in a world that solely inhabits their own minds.

The sickness goes deeper since they believe that if they say something then it becomes true, materialising itself out of the either.

USA created taliban and most other islamist terrorist groups. There is a reason for why this orientation is generally known as yankee jihadism.

You exactly read my mind. Although I did not write it down ‘ Götterdämmeru ‘ was exactly what I was thinking. It’s easy to be fearful but I think my mind is seeing clearly when I foresees a terrible conflagration coming .

Russia should give weapons to the Talibans to defeat USA.

It is called Karma

indeed, they are such shameful arrogant hypocrites and liars…

lame fake news for not admitting their own and real evil deeds: creating, training and arming the Taliban to overthrow in the 80ies the former moderate, pro-Russia government and what was a relatively stable country…

First USA delivered the Soviets its “Vietnam” in the 80s, now it seems that USA get their own Vietnam again.

I guess Russia is not delivering Stinger rockets to Afghanistan, I bet for that. What else they deliver? Who knows, it’s the geopolitical chessboard the USA is so eager to play. If the Russians just learned the rules, don’t blame them for that. Karma can be a bitch.

As the say back down at ole Langley, it is all Vladimir bin Laden’s fault. Who’s his daddy?

Where is the proof/evidence of Tillerson claim, US is loosing in Afghanistan an looking for someone to blame

Ok Tillerson and neocons, you are itching for a war with Russia through proxies, Russia is obliged to reciprocate in kind, in an asymmetric manner like you did in the 80’s. Russia is going to withstand US meddlings everywhere……and win. 4000 additional troops in Afghanistan is a drop in the bucket and is not going to change the overall outcome. Financial and manpower constraints are beginning to show the empire’s lack of ability to enforce its authority.

Its probably true, like that time US armed Taliban in Afghanistan to fight the Russians?

Tillerson is missing his Afghan-grown and CIA-dealt dosis of opium.

I was thinking some form of amphetamines. Inflated sense of ability and really bad judgement. Some along the lines of what they are feeding ISIS blamed for many of the atrocities they commit. https://www.cbsnews.com/news/saudi-prince-held-massive-amphetamine-bust-lebanon/ OR in one of Hillary’s emails to Colin Powell she asks him about a ‘decision making drug’ that other of our elected and non elected folks are taking. These folks are in way over their heads and they know. They won’t let go. We have ways to solve our problems and are perfectly able to create peace and stability but not with these folks dragging us to the brink every 5 minutes. .

Russia should arming taliban now, and just keep silent, because it doesn’t matter if Russia did or didn’t arming taliban, the accusation already there. And if the end they found a prove, just said openly that arms delivery is to support democracy in Afghanistan

Yes, I agree with you, the stupid US regime should not have lied like this, because now this gives an incentive to the Russians for doing as they are anyway accused of it (to cover the US misdeed in creating and arming the Taliban, and their inability to control and destroy the Taliban Golem-monster the US regime created)

Tillerson is trying to start the LIES about Russia; He sounds so amateurish?. He better give the job to the Mossad, they might do a better job of framing Russia at least, they can try? They have already murdered the Russian Ambassador in Sudan? Russia needs to have special forces within their Embassies and as guards for their personnel! Tillerson= rich/reckless/ruthless/crooked/corrupt/greedy and 100% CRETIN.

Given reports that the Afghan government is supporting ISIS and dissident Taliban in an “the enemy of my enemy is my friend” attitude everything is possible. Add to this reports that Iran is supporting the Taliban and it is hard to exaggerate the mess.

And even if, thats what uncle sam did to russia way back in time, they just returned the favor!

Didn’t America create the Taleban and arm them to fight Russia in Afghanistan? Didn’t they provide arms, cash and troops as well as other material support to destroy Russian interests in Ukraine, Syria, Libya, Yugoslavia, Iraq etc? Are they doing their best right now to strangle Russia through sanctions that violate international law and world trade organization rules? Aren’t they actively trying to surround Russia with armies and interceptor/attack systems? Why should Russia care what they think and since when did the shamelessly hypocritical Yankees become so versed in rule of law?

They armed them to fight the Afghan secular government at the time and Jimmy carter signed the order on July 3rd 1979 , Brzeizinsky and the CIA were already involved with arming them prior to that. The Soviets didn’t show up until in December 24 1979 and they were invited unlike the US has stipulated , great misconception in history about that time the US has been responsible for 30+millions dead since WW2 and have created over 10,000 incidents like 9/11 of 40 nations or more.

pfffffft….. They need to seriously back off on the military grade Kool Aid mix over at DoS.

This one is not intended to be taken as truth. It is just for certain fan clubs. A good day to all.

Well someone should. The Taliban are Afghans defending their homeland against a foreign invader who has been bombing the people of Afghanistan for 16 years and has now just announced this will continue indefinitely.

Sheesh … we might not like the Taliban much but they’re a helluva lot less deadly and less murderous than the bloodthirsty Americans – AND it’s their country not the damned Yanks.

And really – ANYONE who can supply the Saudis with weapons to murder Yemeni civilians had better not play the moral righteous sanctimonious card regarding the Taliban.

“If anyone wants to deliver weapons, he has to do it through the Afghan government,” he [Tillerson] told journalists.”

The US in a classic case of the pot belly stove calling the kettle black,lol.

The supreme irony is that the US armed the Mujahaddin with “stinger” anti aircraft missiles and loads of other kit plus CIA training to destroy the Russian forces in Afghanistan through their agent Osama Bin Laden; now, if Russia perform the same strategy to destroy US forces the US should not be surprised. If I were Russia the policy is obvious: supply through a 3rd party “Kornet” TOW missiles and Russian versions of Manpads to destroy core US assets like armoured vehicles, helicopters and bombers. In time the US would come to realise the Afghan adventure was another poor policy decision. However, as Napoleon once said “never interrupt the enemy when he is making a mistake”.

Fortunately up until now we do not know of man pads ie portable ground to air systems being used on commercial aircraft but this is the real issue. Once that Pandora’s box is open all bets are off as to who and where they will show up in the black market for indiscriminate use.

George – Agree! However, you can bet they will.

This is all about the pivot to Asia pillage & plunder mentality in an Empire/economic war on China, Russia, Pakistan, Brazil and as we have seen recently (which appears to have calmed down). Witness a China vs India (US vassal) border dispute of China building a rail link that is not Indian territory.

Are India and China heading towards a cold war over railways? http://www.dailyo.in/politics/railways-war-china-india-leh-tibet-belt-and-road-initiative-pakistan/story/1/18077.html