The US expressed has expressed a “great concern” over Turkey’s shelling of US-backed Kurdish militias in Syria where US forces are embedded.

“Unilateral military strikes into northwest Syria by any party, particularly as American personnel may be present or in the vicinity, are of great concern to us,” Deputy State Department spokesman Robert Palladino stated during a news conference in Washington on October 31. He added that the US and Turkey is in touch to de-escalate the situation.

Despite this, the US deployed additional troops and equipment nera Kobani and Manbij using its forces as human shields to prevent further  Turkish strikes on positions of its proxies.

The so-called Syrian Democratic Forces (SDF), which consist of mostly Kurdish militias described by Ankara as terrorists, have already suspended their offensive on the ISIS-held pocket of Hajin in the Euphrates Valley because of Turkish strikes. This as well as a low intensity of US-led coalition military actions against ISIS in the area have already led to the growth of ISIS influence in the area. 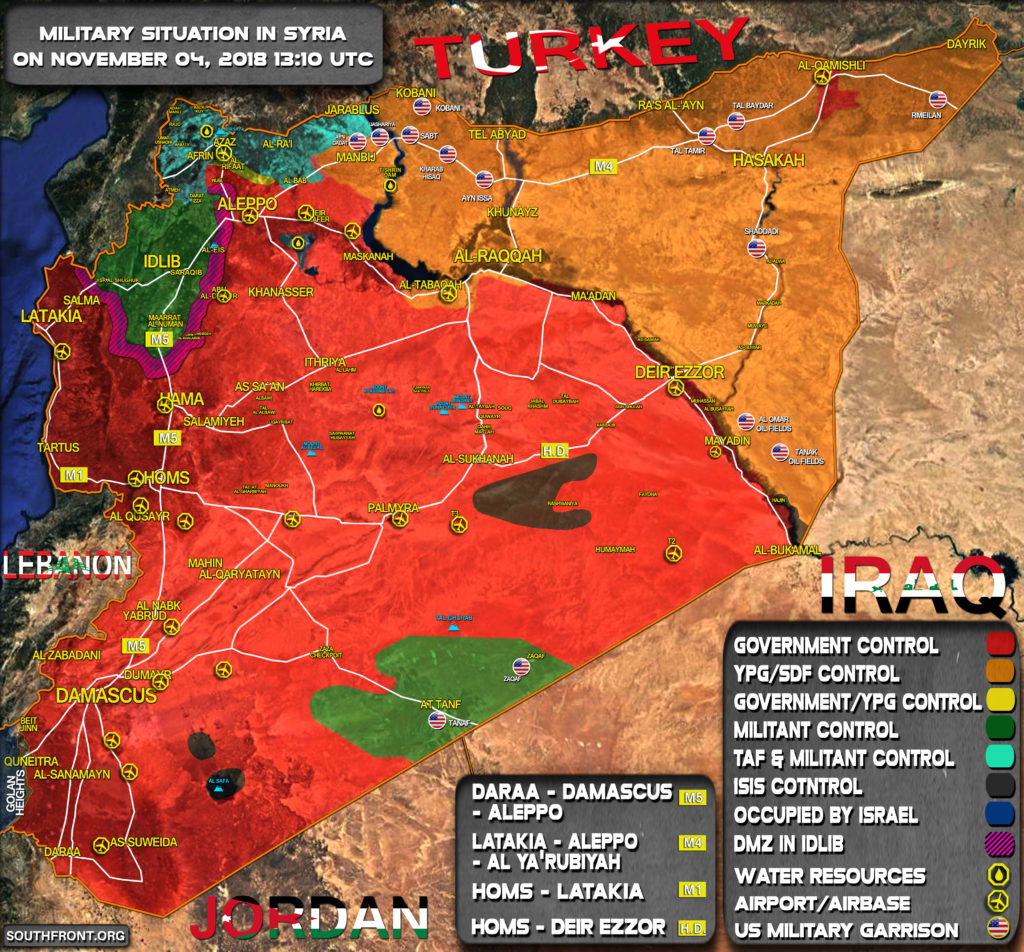 Yankees need to fuck off. how about that? if you dont wanna get bombed leave

Turds need to fuck off.

Both turkey and U.S should get out. Let Syria and the countries they invite to help them, figure it out

You think country Syrian invite will live soon after the war naaa . Russia got base. Iran trying to rich Mediterran sea .Whatever the cost is western country not going to allow that to happen .syrias prop not just outside .but Mainly inside there are minority groups big prop .gd luck and god help Syrian people

I think that sums it up rather well.

They are there illegally,so their risks are made by their zionist regime in israhell and washington.

What the hell these US morons doing in Syrian country. US have held entire world kept as hostage.

US is taking a revenge because Russia destroyed their plans for regime change in Syria.

Everybody can see on this map US own E-Syria. It is unprecedented that Turkey bomb on American soil. The United States is in Syria to protect peace and fight terrorists. If ISIS is still around, we stay for security and freedom.

Peace?????? They kill kids and baby’s and women for their conquests. For natural resources, they don’t care ho they are killing America is the reason why is war in a Afghanistan, Iraq and many other countries. FUCK them and YOURSELF

Don’t bother with asshole, he’s just a bugger around.

You dont see the rest of the world and the conditions in Syria at all.

You are utterly demented. American soil??? In Syria to protect peace??? What a joke. America is there purely because they want to ruin what Russia has accomplished so far. If you can’t be the lead football player and no one wants you on their team, then ruin the game for everybody . . .

You got a point with the football team. I think it picture it well..

Would they even want him. Even the Zionazis have standards in their journalism . .

Even the Zionazis have standards in their journalism..??

Blappering again. No wonder nothing is solved by You.

“Blappering again. No wonder nothing is solved by You.”

Yet strangely you feel the need to follow my commnents all over Southfront..

As usual. Other then internal oppinions by internals in internal countries in countries – are not allowed but named as trolling and like that.

Much more, You are the troller nort allowing oppinions not like Yours are alowed.

‘The United States is in Syria to make peace and to fight terrorists.’

James Jeffrey ‘US envoy on Syria’ has formally announced a change in US policy goals toward Syria – ISIS are irrelevant and fighting Iran is the primary new rationale – which doesn’t work under the Obama era domestic US legal use of 9/11 laws to justify invading Syria. That is Pentagon brand Kool-Aid you are slurping down in large quantities.

A start could be The Syrians left Aleppo and Raqqa provinces as welll as Turks.

The owners in Damaskus did not even liberate themselves and made the borders. Funny the borders are made for oil in Iraq only.

‘A start could be The Syrians left Aleppo and Raqqa provinces as welll as Turks.’

Aleppo and Raqqa? Why would Syrian’s leave their own cities and governates? Presumably, you fantasize about these cities and governates being permanently handed over to the YPG – despite Kurds not actually being majority population or inhabitants of these areas. Equally, presumably you advocate the US/Israeli plan for the complete ethnic and sectarian Balkanization of Syria.

There’s nothing there able of de-escalation, only foreigner occupiers and their mercenaries fighting each others, escalating the fight in an already lost war for both.

The US has no legal authority to be in Syria. Good move, allowing Turkish assistance, owing to Nato members, having a hissy fit with each other. Who needs who most?

O my God if I will become president of any country in Europe I will unleash hell in the America I will attack them at theirs homes I will b r ing war on American soil to make them feel what is to start a war. And they will feel the same pain which they are inflicting on other countries

Do not believe the US crocodile tears. The US do not care for their proxies and will drop them in an instant, and the treacherous Erdoghan will happily embrace the US as the latter switches support from Kurds/SDF to Turk/FSA to establish ANY non-Syrian govt partitioned area in Syria. I believe the big concern SAA & allies seem to be overlooking is a stealth switch by the US from SDF to FSA to establish control of the same north and east Syrian territory the US is already in, ie. Turkish and (eventually) US force in this area to simply replace the Kurds with a state saturated with US-Turk supported FSA/HTS terrorists.

All political doublespeak to fool the masses. The US is about to get the perfect excuse it needs to pull out of this area altogether, leaving behind all that shiny new infrastructure they purposefully built for Erdogan [so his soldiers can use after they leave], and cruelly leaving the poor old Kurds to his boundless mercy, or lack of it. This development is just a precursor action that’s enabling Erdogan to pull his troops out of Idlib [welfare trap] and move them east to the oilfields he really wants [goldmines]. A secret deals been done that’s going to allow this to happen, and to also fool us all into thinking it was all by simple chance, but no me. US servicemen acting as human shields, that doesn’t sound right, what about US servicemen killing Turks whilst protecting Kurds, that doesn’t sound right either, what about Turks accidently killing US personnel who are trying to protect Kurds, that does sound a little better, but no as good as Kurds killing Turks and Turks killing Kurds, that sounds just about right if not perfect. How long will this joint Turk/Kurd patrolling exercise last when they’re already killing each other, not long I suspect. The Turks will not only have a right to retaliate against the Kurds if keep attacking them, they’ll also be justified in taking over new areas from them to insure their own security and safety. Step by step this will continue until they’re at the Iraqi border and dipping their toes in the Euphrates there. US servicemen acting as human shields for the Kurds, yeah sure, history already tells us what they’ll do when their troops are in danger, pull them out at the first sign of it.

Get your troops behind your own borders and they won’t be at risk! YOU put them in other people’s countries YOU put them at risk. So STOP WHINING and GO HOME. FO – You’re not wanted – ANYWHERE.

Many Muftis of Jerusalem here.