Vice President Tareck El Aissami addresses a press conference alongside the president of the state-run CONVIASA airline and representatives of the workforce. (MINCI)

The US government has sanctioned Venezuela’s state-owned airline CONVIASA, claiming it is being used to “shuttle corrupt officials.”

While already subject to previous US unilateral coercive measures, the latest sanctions add the airline and 40 of its planes to the US Treasury’s Office of Foreign Assets Control’s Specially Designated Nationals List so as “to ensure strengthened compliance.”

The move incorporates the airline into Washington’s executive order 13884, which applied a wide-reaching embargo on the country in August last year.

“The illegitimate Maduro regime relies on CONVIASA to shuttle corrupt regime officials around the world to fuel support for its anti-democratic efforts.”

The sanctions were met with a defiant response from Caracas, with a range of government officials joining CONVIASA workers in rejecting the sanctions.

Foreign Minister Jorge Arreaza described the sanctions regime as “the diplomacy of the absurd” and promised to “raise our protest to international organisms.”

“Nothing will stop us, nothing will demoralise us, to the contrary, we will continue to grow in the spirit of struggle, and now CONVIASA will become an ambassador for Bolivarian peace in the skies of the world,” he told reporters.

El Aissami stressed that apart from affecting passengers, the measure will also hurt a range of social programs, including the Return to the Homeland program which has provided free flights for a reported 20,000 Venezuelan immigrants to return to the country, and the Miracle Mission which brings patients from across the region to Venezuela for free ophthalmological surgery.

Venezuelan social movements and progressive parties organised a march on Monday to reject the latest sanctions and support the nationalised company.

The Venezuelan Consortium of Aeronautical Industries and Air Services (CONVIASA) was created in 2004 to replace the national airline VIASA which was liquidated in 1997. It currently offers a multitude of domestic routes, as well as international destinations including Cuba, Mexico, Panama, Dominican Republic, Ecuador, Nicaragua and Bolivia, with plans to open routes to the Middle East and Europe in 2020. With several foreign airlines ceasing to fly to Venezuela in recent years, CONVIASA has become the only one serving a number of Latin America destinations.

The airline had already felt the bite of US sanctions, denouncing last September that the threat of secondary sanctions caused Peruvian authorities to block the refuelling of one of its planes used in the Return to the Homeland program.

US unilateral coercive measures against Venezuela targeted a number of specific industries in 2019, including oil, gold, and the banking sector. They were expanded to a wide-reaching embargo in August.

The August embargo also authorised secondary sanctions to be applied against third parties dealing with the Caracas government. Despite Washington refraining from applying this measure so far, US Special Envoy for Venezuela Elliott Abrams raised the threat once again of action last week. 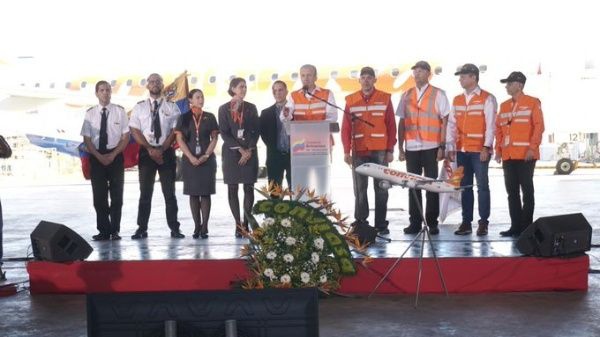 Vice President Tareck El Aissami addresses a press conference alongside the president of the state-run CONVIASA airline and representatives of the workforce. (MINCI)

Speaking in a press conference on Thursday, Abrams specifically highlighted Russia’s involvement in Venezuela, warning that

“The Russians may soon find that their continued support of Maduro will no longer be cost-free,” while pledging to “demonstrate the seriousness of our intentions in Venezuela.”

The companies continue to play significant roles in Venezuela’s oil industry, with Rosneft reported to currently be purchasing around 60 percent of the output, much of which is rerouted to other markets, including the US. Repsol and Reliance have also increased their dealings with state oil company PDVSA in recent months, reportedly exchanging crude for fuel and diluents so as to avoid sanctions. For its part, Chevron is involved in a joint oil venture and has been granted successive sanctions waivers by the US Treasury Department.

The threat of secondary sanctions coincided with a visit to Venezuela by Russia’s Foreign Minister Sergei Lavrov, who described Washington’s sanctions regime as “illegitimate” and “outrageous.”

“We have agreed to deepen our economic, commercial and investment cooperation [with Venezuela] in several areas despite the illegitimate sanctions,” he told reporters Friday, adding that “It is outrageous that unilateral actions by the United States affect social and humanitarian projects.”

Caracas and Moscow have strengthened ties in recent months, with bilateral agreements signed on a host of areas, including agriculture, industry, mining and defense.

Time for Russia to open military base in Venezuela and deployed S400 along with some Iskander launchers!

And that will solve the current situation? While I hoped that Russia was an alternative to these United Terrorist States, but it has shown that it is not. Putin/Russia was not even able to prevent these terrorist states from overthrowing Yanukovitch(Ukraine) who presided just across the border of Russia, you think that Russia can do anything to protect Venezuela which is 8000 miles away?

They did in Syria!

Although, Russia’s intervention has somewhat prevented the fall of Assad, but it has not secured the sovereignty of Syria, and the whole country is destroyed. Israel is allowed to lob missiles into Syria at will. US still occupy huge portion of the country. Turkey got a chunk. No wonder that even Belarus is trying to get away from Russia.

Not yet but coming!

Back to 2014 / 2015, the wahabi-takfiri-terrorists almost got Assad caught when they were very close to Damascus, SAA were quite succeed in holding their moved, that’s become one of Russian considerations to finally openly declared intervention in Syria and helped Assad in 2015. Putin is playing long time games in every front (NK, China, Middle East, Caucasus, Ukraine) where US is trying to wreck small-destruction to weaken Russia as soon as it gets opportunity to do so.

Of course destroyed by the Americans and their terrorist proxy but Russia turn the tide and in few years, will be liberated. Slowly but surely!

You are fully right. Niether USSR, nor Russia is not really global player. Russians never had money, equipment and know-how to operate far from their borders.

It is correct, Russia don’t have money & know how to operate base far from border. And it is not in their military doctrine, that’s why Russian Army rely on long range weapons to fend off aggressor, the US. Thesaker written this topic specifically on his blog / books (1st or 2nd book).

Know your history. Soviet Union (Russia) supported governments all over the place, and quite successfully actually. however it drained all the resources and ultimately led to the collapse of SU. Russians today will not start the same kind of global support operation, and that is a good thing. Countries need to stand on their own feet.
NB. US can do the support ONLY because the Rothschild international banking and monetary system massively favours the US economy. Without that the foreign commitment of US would come to crashing halt.

There was reasons on why Russia did not protect Yanukovych went back to 2014. One of the reason was at that time in 2014, Russian Army is yet to have “state of the art weapons” as in 2018 / 2019, I read it somewhere, on thesaker I guess.

The more oil we produce the more we show our true color, aggression. This shatters the myth that we only get involved in foreign affairs because we have to protect our access to oil. Nah … we love it. If anything oil dependency forced us to actually negotiate once in a while.

More sanction by US = more war crimes by US!

You say so but International Law does not. You lose.

Chevron is still there because they’re the only one that has the expertise to get Venezuela’s very heavy crude out of the ground.