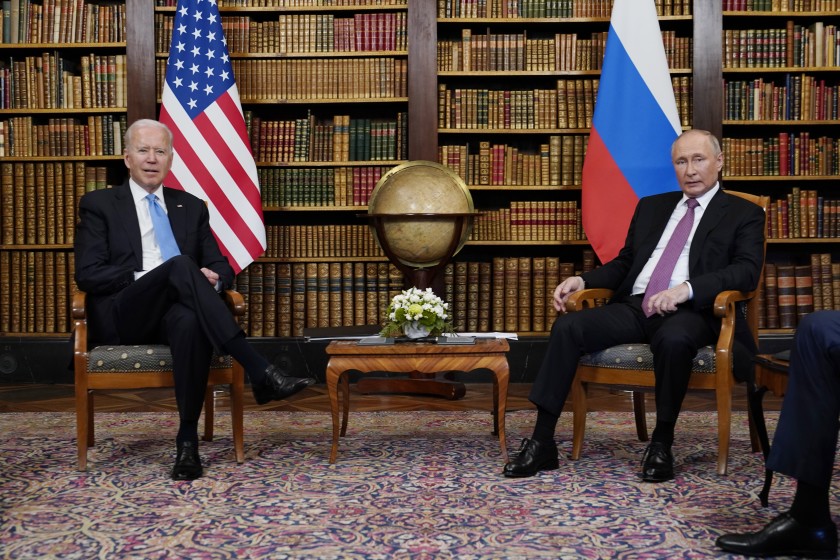 The meeting resulted in a joint statement on strategic stability.

President Putin called the meeting “constructive” and that the Russian and US ambassadors will return to their posts.

The rather short statement is the following:

“We, President of the United States of America Joseph R. Biden and President of the Russian Federation Vladimir Putin, note the United States and Russia have demonstrated that, even in periods of tension, they are able to make progress on our shared goals of ensuring predictability in the strategic sphere, reducing the risk of armed conflicts and the threat of nuclear war.

The recent extension of the New START Treaty exemplifies our commitment to nuclear arms control. Today, we reaffirm the principle that a nuclear war cannot be won and must never be fought.

Consistent with these goals, the United States and Russia will embark together on an integrated bilateral Strategic Stability Dialogue in the near future that will be deliberate and robust. Through this Dialogue, we seek to lay the groundwork for future arms control and risk reduction measures.”

When asked about the cyberattacks allegedly originating from Russia, Putin voiced information that he said is unknown to the general public.

“From American sources, it follows that the largest number of cyber attacks in the world are carried out from the cyberspace of the United States. Canada is in second place. Then there are two Latin American countries. And then Great Britain. And then comes Russia in this list of countries from whose cyberspace the largest number of cyberattacks of various actors occur.”

As the president noted, he and Biden agreed to begin consultations on cybersecurity. According to Putin, Russia in 2020 received ten requests from the United States about hacker attacks, and gave answers to all of them. In turn, Washington did not respond to any of Moscow’s 45 relevant inquiries last year.

According to the Russian leader, he is convinced that Russia and the United States can and should cooperate in the Arctic, the summit participants discussed this issue in detail in a wide format.

At the same time, Putin stressed that the statements of the American side about the militarization of the region have no basis whatsoever.

“After all, we are not doing anything there that was not in the Soviet Union, we are restoring the infrastructure that was lost, once completely destroyed. Yes, we are doing it at a modern level. Infrastructure both military and border, and what was not there – infrastructure related to nature protection. We are there creating an appropriate base for the Ministry of Emergency Situations, bearing in mind the possibility of rescuing people at sea, if it comes to that, God forbid. Or protection of the environment.”

Putin told reporters that after President Biden made harsh statements about him when they had a telephone conversation.

“President Biden called me, we explained, these explanations satisfied me, he offered to meet – this is his initiative, we met. <…> Everything that happens in our countries, one way or another, is the responsibility of the political leadership and the first <…> Take Afghanistan. 120 people were killed there with one blow, weddings were destroyed. Let’s say this is a mistake, this also happens. But shootings from drones or helicopters of clearly civilians in Iraq – what is it? Who is responsible for this? responsibility? Who is the killer?”

Speaking about the situation in Ukraine, Putin noted that Russia has only one obligation – the implementation of the Minsk agreements. He recalled that in November 2020, Kiev presented its plans to implement these agreements.

“What did Ukraine offer? It offered the first step to return the Ukrainian armed forces to their places of permanent deployment. What does this mean? This means that the Ukrainian troops must enter Donbass. First. Second, they proposed to close the border between Russia and Ukraine in this part.” And the third is to hold the elections three months after these two steps.”

Answering a question from journalists about the imprisonment of Alexei Navalny, Putin recalled that he, being conditionally sentenced, did not check in after being discharged from a German hospital.

And finally, on US attempts to contain Russia:

As of the evening of June 16th, US President Joe Biden is yet to hold a press conference.

if Russia is the enemy, what kind of organizations will America support in Russia? I think that not those that strengthen Russia, but those that hold it back. This is the goal of the United States, declared publicly.

U.S. establishment/CIA always blames the other side with their own crimes.

Neo-trotskyites are crying and raging 🤗

When Putin met Trump, the secret question everyone was dying to know was how many times did Trump, like a suave cultured American let one rip between his fat butt cheeks? In the case with Biden, the question changes to: how many times did they have to change Joe’s Depenz?

Trump’s rips were few big and dry, but smelled like hot lava, while Biden’s were small, many and wet. No man, Trump blew everybody out of the room.

How incredibly accommodating Putin is. We have never had a better guy in Moscow.

Reported briefly in the press at the time,[2] Rosenbaum’s letter of December 17, 1998 ended any doubts that the U.S. government had given scientists and military personnel associated with the notorious Japanese biological warfare program of the 1930s-1940s “immunity [from prosecution at the International Military Tribunal, Far East] in return for their human experimentation research data.”[

Attribution for cyber attacks will now be assumed. Lol And it seems that the US knows it has the upper hand in cyber warfare and is looking for an opportunity to use it. Seems like i should update my eset with what little protection it gives since the coming months will be full blown trading of cyber attacks. I wonder how stocks and bitcoins will be affected. lol

Putin didnt succeed in chemical warfare, and China didnt succeed to take US economy down with the Corona virus. Thats why they now will try to take America down with cyber attacks and EPO’s.

this is exactly what ive been saying this whole time but they just wont listen!

Watch as it comes out in the ensuing months that the Jews’ Biden puppet promised to the Russians the elimination of the Jews’ US Tyranny’s land based ICBMs in exchange for Russia abandoning their efforts in Syria and their support of Iran.

The Jews, as they move their plundering and destroying grift-machine back to Europe, will not permit the remnant of their US Tyranny have nuclear arms. The US Tyranny’s tactical, airborne, and sub-borne nuclear warheads can be easily relocated, but not the ICBM loaded warheads in the American Midwest. These missile warheads then must be eliminated in a plausible way.

We told Putin about his behaviour. No more grabbing land masses and gold, no more pouring gasoline all over ME and no more dumping oil and gas prices. Otherwise it will have consequences for Russia. With all tools on the table. Putin must follow orders from US State Departments General Chief for Eurasian Regional affairs