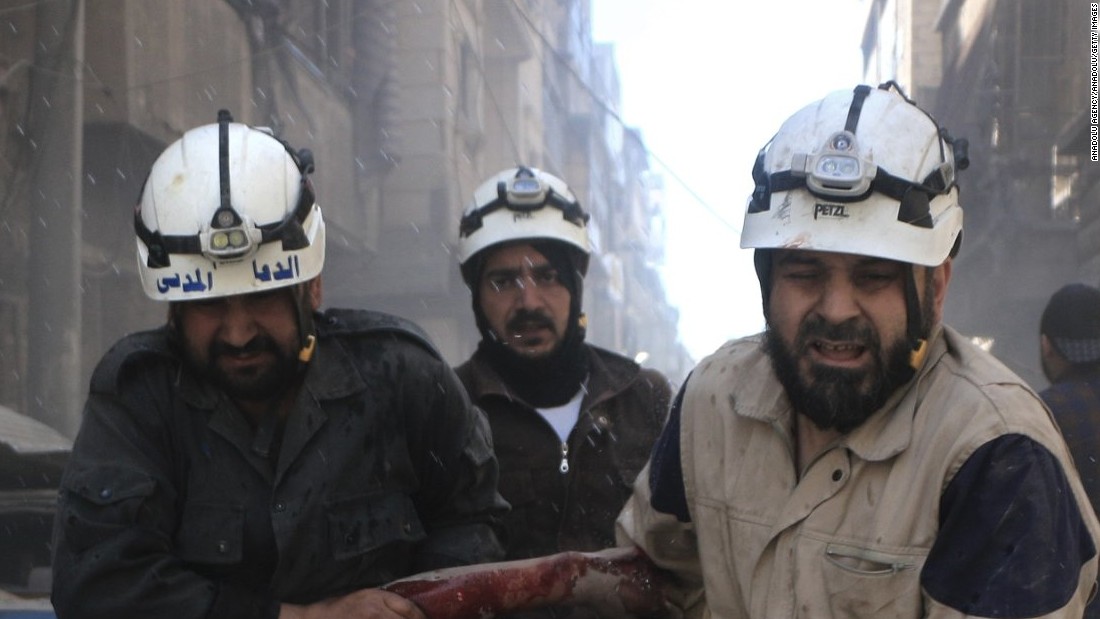 On June 14, US President Donald Trump authorized the United States Agency for International Development and the U.S. Department of State to allocate approximately $6.6 million to fund the Syrian Civil Defense, that is known as the “White Helmets,” and the UN’s Impartial and Independent Mechanism (IIIM)

In an official press release, the U.S. Department of State stressed the US support for the controversial Syrian organization and described its acts as “heroic.”

“The United States Government strongly supports the White Helmets who have saved more than 100,000 lives since the conflict began, including victims of Assad’s chemical weapons attacks. These heroic first responders have one of the most dangerous jobs in the world and continue to be deliberately targeted by the Syrian regime and Russian airstrikes,” the U.S. Department of State said in its press release.

The U.S is not the only supporter of the White Helmets, radical groups such as Hay’at Tahrir al-Sahm (HTS), which is labeled by the U.S. as a terrorist organization, also back the organization to facilitate its work. Former leader of HTS Abu Jaber Shaykh and radical Saudi cleric Abdullah al-Muhaysini even stressed their support for the White Helmets in a public video, which was released last year.

Hay’at Tahreer Al-Sham leader Abu Jaber & Muhaysni honor the #WhiteHelmets. What more proof do you need of their ties to Al-Qaeda? #Syria pic.twitter.com/yz47YsJ17B

The Syrian organization was also accused by Russia and the Damascus government of covering up militants’ crimes and of staging fake chemical attacks to provoke a U.S. military action against the Syrian Arab Army (SAA). The most notable case was the alleged chemical attack in the district of Duma earlier this year.

Most of the US funds will likely find its way to the White Helmets centers in areas controlled by the former branch of al-Qaeda in Syria HTS and other al-Qaeda-affiliated groups. This poses a serious threat, especially that the U.S has no real mechanism to track these founds once they are delivered to the organization.

Looks like we are being set up for the false attack predicted by the RF defense ministry.

The US Deep State just doing what it always does…. funding it’s terrorist proxy army for another go at regime change.

That’s what came to my mind as well Vince.

Of course the Deep State feels now is the time to act again. Putin is ONLY a concern in a nuclear war scenario. Outside of WW3, Putin is a fully neutered paper tiger, whose leash lies forver in jewish hands.

But actions in Syria will be petty and vile- little fleabites to keep Putin hopping to his jewish master’s voice. We’ve witnessed as the appeaser has humiliated Iran by creating no-go regions in Syrian for Iranian forces- even as NATO moves the most vicious anti-Russian forces right to the very borders of Russia.

Putin has betrayed Syria more than any Empire power in History ever betrayed an ally. That the Syrian people, thanks to Putin in the first place, were caught between the devil and the deep blue see, is neither here nor there. Putin allowed the wahhabi invasion of Syria in the first place, and worked to ensure that Assad alone would fail and fail badly. Only when Syria lay in ruins, as Putin’s jewish masters demanded, did Putin step in and use Syria as a live fire advanced training ground for Russian forces and tactics.

Syria is now ruined and partitioned, and awaits the next terrorist ‘revolution’. It is less than 5% of the effectve nation it was before the wahhabi invasion- and that’s the prize Putin delivered to the jewish Hitler. Now the game is about doing FAR WORSE to Iran.

This seems strange to say the least. For funds to be freed up to help the Syrian people makes sense, but not for it to be put in the hands of the white helmets. Propoganda? It is flowing waist deep these days.

… And Syria has allocated 6 million dollar’s worth of fireworks to bomb the shit out of White the Helmets.

Expect some … RUSSIAN “fireworks”. I guess the Russkis have enough from this White-helmets”-theater. If not immediately Putin, but the Russian military commanders in Syria. If the Russians don’t obliterate that propaganda-cr@p, this scam with false-flags and the lies with “Russians/Syrians bomb civilians” -BS will never end. (Yet another USraeli “good investment” (SIC!)

The Most Important Question that is not being asked “How exactly are they going to recieve the Cash?” I think I have a simple and Logical answer. The 6 million will probably go to southwest FSA, Afterall Many American politicians have invested Allot of Paper into the Golan Hights.

its all about satanic judaism ruling our planet, and to finally achieve what they have been fighting for since 2000 years, a one world government with jerusalem as its capital under satanic jew leadership.and they are all in to it, russia,usa,eu,china,japan etc..

which countries do not recognize the illegal entity named israel? thats the last stage for the final assault, the preparation was achieved with jerusalem as the capital, the breakup of syria by nato forces…..in the north, in the east, in the south and the satanic jews in the west

now they can slowly but surely build up pressure in syria, in lebanon and in iran.when will the final attack take place? same bs question as who was the final shooter of JFK.The Agenda is layed out, preparations have been made, clock is ticking……tick tack tick tack………

and we all have our luggage with them stones in it, which made it possible for them satanic pricks to achieve their goal………..instead of reading and learning, getting involved in each of our nations political systems…. we chose the easy road…….drinking,taking drugs, watching jew satanic bs hollywood movies,playing jew satanic bs computer games, watching stupid brainless sporting events, sexually abusing our brothers and sisters all ages or letting it happen, watching day and night while those pricks steal our all nations wealth just for the few being the jew slaves who sold their souls…and i could go on and on and on…….we let it happen since centuries….knowingly…either because of fear of reprecusions or like mentioned above because we just didnt give a shit and had better things to do.the truth will set us free.

The alternative is very grim. As described by Israeli journalist Gideon Levy, “The truth is that Israel is well prepared to massacre hundreds and thousands, and to expel tens of thousands. Nothing will stop it. This is the end of conscience, the show of morality is over. The last few days’ events have proved it decisively. The tracks have been laid, the infrastructure for the horror has been cast. Dozens of years of brainwashing, demonization and dehumanization have borne fruit. The alliance between the politicians and the media to suppress reality and deny it has succeeded. Israel is set to commit horrors. Nobody will stand in its way any longer. Not from within or from without.”

That’s what I like about Trump….consistency…the way he speaks out of one side of his mouth, then the other…or is it the other end? No matter…it’s always the same old $hit.

The so-called “White Helmets” should be treated like any other brutal terrorist organization.

The US has had a relationship with al Qaeda going back many years, al Qaeda and its offshoots have carried out all of Americas big terrorist attacks. Expecting the US to dump them, because they failed to carry out a convincing gas attack is fantasyland stuff. As long as the USA exists, its loyal al Qaeda fighters will stand shoulder to shoulder with Uncle Samuel.

6.6 million and 3.3 of it will go straight into their own sleazy pockets.