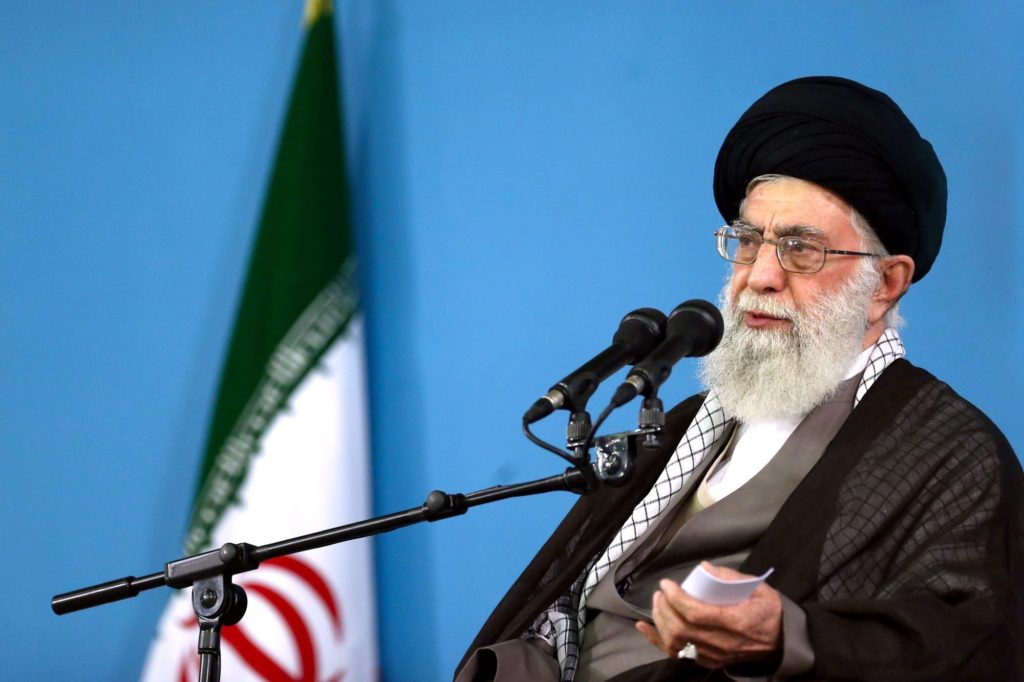 Office of the Iranian Supreme Leader via AP

The US has been relocating ISIS terrorists from the Middle East to Afghanistan to justify its military presence there, Supreme Leader of Iran Ayatollah Seyyed Ali Khamenei said on January 30, according to the state-run media.

The US seeks “to justify the continuation of its presence in the region and to create security for the Zionist regime,” Khamenei said. “The same hands that created Daesh as a tool to oppress people in Syria and Iraq and carry out crimes against them are today seeking to transfer Daesh [ISIS] to Afghanistan after its defeats there.”

“To the US-backed terrorists, Shia and Sunni [Muslims] are no different, and civilians, including Shias and Sunnis, are their target,” Khamenei added saying that the US military presence is “the main source of insecurity in Afghanistan.”

ISIS uses the complicated situation in Afghanistan to expand its influence in the region.

Nice to hear it exactly how it is.

Wise words from a great leader!

wise words from a motherfucker

They have to do something, to keep the heroin flowing in. Other wise how they have all western population so drugged that they don’t care of anything? With the cluster fu*ks they been into since the `90s, not to go farther back, is the only income they have left, almost.

Dont forget the rare earth metals in the afghan ground worth trillions,,,thats why trump changed his mind about pulling out,,he was told not to.as they are mining already,especially in Helmund province where its abundant,,and coincidently where most of the killing of civilians is occuring,,go figure.

Yes i am aware of them, but they can not do nothing extracting them, unless of course they conquer the country not just be in a city and bragging, they win. And to do this need also the cooperation of the population that I am sure after been there and doing what they did with their allies, hate their guts even the ones who may been thinking positive at first when the NATO arrived to their country.

What americans and their patrons want is irrelevant as they will never have it.

How many westerners do you know that use heroin??? At least in west europe this is a NON existent problem

obviously you live in a paradise my friend away from the common people. I used to also, but then one day I decided to mingle with them, in a project to help addicts using Ibogaine, for therapy. If you don’t know what Ibogaine is google it.

It is not only an existent problem but is like an epidemic out of control. Hard drugs -alcohol – but worst of all prescription drugs, are on a the high, especially in northern countries but also in england -france – germany and Italy, not to mention the center of this in spain. So my question to you, is in what planet are you living on?

No sarcasm inetnted honest question or what you don’t know does not exist for you?

I live in the middle of what used to be the heroin centre of the country, i know ex junkies, dealers and had to send junkies away from my doorstep on a daily basis. It is however TODAY a NON existent problem here in west Europe! You talked about HEROIN! Don’t start talking about drugs in general now!! Drugs are nice!! I used to do alcohol and several other kinds of drugs 4 times a week when i was younger. Today i am too old for that, so now it is more like once a month, but i still enjoy it, nothing wrong with it.

maybe you should visit the drug centers more often and I think you confuse europe with the road you live in and again I am not sarcastic.

Mayebe you should accept that not everyone agrees with your way of looking at things. You don’t know shit about me and my life, family, friends and experiences. I know a lot about drugs, so just stop bullshitting me. You started a post about HEROIN, wich in Europe is NOT a problem since 20 years. I have friends in several European countries, so i know what i am talking about.

Yeah, the CIA/NSA figured out long ago that unlimited, illegal, untraceable funds are much better than funds from CONgress, which is supposed to be accounted for. They don’t have to tell where it goes, what is does, who benefits…because it doesn’t exist.

They better revive the draft soon. They’re short on hands everywhere and Trump may have promised (or losing control ?) a new war on Iran or N. Korea. Those paid mercs will turn on them whenever it’s convenient.

(..US Relocates ISIS Terrorists To Afghanistan To Justify Military Presence There – Khamenei..)

As we speak, U$ is also exploiting the Rohingyas crisis in Myanmar, trying to relocate its ISIS/Al-Qaeda proxies to Myanmar to create chaos and mayhem in that country.

Interesting thought. Now back that cookoo statement up with a shred of proof please.

Educate your self check ; http://www.gearoidocolmain.org/Rohingya/psyops/us/covert//war/myanmar/

Yes and the Russians have now decided to sell Myanmar a few Su-27s(IIRC). Needless to say the US is pissed. Even though Kameini just announced this (ISIS in Afghan), it has been common knowledge for some time now, as the Zionist terrorists just can’t keep a secret. Not to mention that IS seemingly came from nowhere (in Afghan) as soon as the Syrian thing went into the toilet. Regardless of those out there that continue to supposedly believe whatever crapola the US spews…they want ‘proof’ of US collusion (as if they’d ever believe it), all the while spewing western crap claims, backed up with nothing but phony self-righteous indignation and chutzpah.

Wonder about Sinai Peninsula as well – Egypt was getting quite sympathetic toward Syria and was some discussion of mutual military cooperation on anti-terrorist operations in Syria. Likewise, Egypt was notably opposed to Saudi attempts to spark conflict in Lebanon via the Saudi forcing Hariri to resignation farce. In this same period ISIS have expanded in Sinai – ISIS deliveries as warning to al-Sisi to keep out of Syria?

The Northern Sinai was a hotbed of Jihadi activity long before Egypt became sympathetic towards Syria again. The biggest reason for that can be summed up with a few words: the Gaza Strip. All those tunnels to and from, plus a lot of extremists in the Strip make it Egyptian side of it a perfect breeding ground. It doesn’t help that by the peace treaty with Israel Egypt cannot deploy its full military force in that area.

Occam’s Razor, always go for the most simple and plausible explanation. ISIS pops up wherever central authority is weak or non-existent, and a large jihadi presence is already established. Syria, Afghanistan, Libya, Yemen, the northern Sinaï, they’re all places that fit those conditions. I’m sure they’ll pop up in the Saharan region and Somalia soon as well. I think Boko Haram is already joining their franchise. No need to resort to crackpot tinfoil conspiracy theories about secret American flights for that. It’s the friggin’ American government for fuck’s sake! Everything it does turns to shit because they’re incompetent. Yet suddenly they’re super duper good at secret conspiracies?

As for Khamenei, he is just blowing smoke, as Iran recently had the protests, so he’s fanning the flames of anti-American rhetoric again as a distraction. He’d be better of using Conway Twitty in that regard, as I doubt most Iranians still believe that old spiel. But I doubt Khamenei has ever seen Family Guy. Unlike probably most of his countrymen, most of whom probably watch more American TV on their satellite dishes then we do here in the West..

The problem with your theory about Gaza is twofold. Firstly, al-Sisi flooded the maze of Gaza-Sinia tunnels halting much of the human and resource flow the in last year. Secondly, and far more significantly, Egypt has had its own Sunni fundamentalist extremists, since the 1920’s. They hardly need Saudi styled Wahhabi ISIS interlopers – and Gaza is all about that Egyptian Sunni fundamentalism – the Muslim Brotherhood. A sudden expansion of ISIS in Sinai makes no sense – Egypt has its own domestic Sunni fundamentalist terror branch – and always has. The rapid expansion of ISIS is a curiosity – call it tin foil hat all you want – but after the toppling of Gaddaffi the CIA transited armed Libyan fundamentalist militants into Syria in early 2012. This was later documented by journalist Seymour Hersh. So now that ISIS have failed and are winding up in Syria why not transit ISIS militants from Syria into Sinai in 2017/8 – they live for another fight and telegraph very loud message to al-Sisi about regional power game.

and what you witnessing now is operation GLADIO II, that been activated fully again, in the `90s.

The truth means nothing to the zionists,,they will carry on lying regardless.

Didn’t Duterte in Phillipenes also have ISIS problem within a few days of a major row with US?

Yep; the timing was uncanny wasn’t it ?

Google offers to new employee 99 dollars per-hour to do some small tasks online .. Do job for only few peroid of time in a day and live happy greater time together with your friends … Any person can apply this easy job…last Saturday I bought a brand new Chevrolet just after earning $17814 this six weeks .it seems the most rewarding however you won’t forgive yourself if you don’t learn this.!he261r:➫➫➫ http://GoogleCashCareerSoftWorkFromHome/more/cash… ♥♥v♥♥♥c♥♥b♥♥♥g♥u♥u♥♥q♥♥♥o♥♥♥a♥♥♥b♥♥m♥♥e♥s♥♥z♥♥♥n♥l♥♥♥x♥♥♥l♥♥♥a♥c♥l♥m♥♥t♥♥♥m♥c:::::!gx41a:lhuh

Why is the u.n silent do the right thing

Ansar’allah doesn’t flip flop, the Emirates have better mercenaries than the Saudis, besides 85% of the population resides in Ansar’allah(Houthis) areas. Ask why NATO ships are enforcing the blockade on all necessities.

But Houthis use this footwear when making appointments with their portly adversaries.

Surely you’ve heard them called this before. It’s not a sign of derision, but a complement. Flip-flop wearing army fights modern jack-boots…and wins.

When a long known terrorist group in the Philippines make a video that pledges allegiance to ISIS and is defacto “renamed” in global media sources, you morons see a connection to the US. Of course none of you know the name of the Philippine group that now goes by “ISIS,” but you are so damn sure they were “sent” there by the US.

Yes, I remember now, the ones pictured holding the ISIS flag in Arabic upside-down…I suppose language skills in the intelligence agencies and military are not what they should be.

Your analytic ability is scary

Afghanistan must unite with all countries on their borders that is Iran, Pakistan, China, Russia etc.

Afghan government should have to tell to all foreign governments to withdraw your forces from Afghanistan with in 24 hours otherwise it gonna be too late.

These terrorist activities are carried out by Zionist terror network headquarter Israel because they want to destabilize the region to take out the Pakistan missiles and nuclear assets. Second to stop work on CPEC project.

Afghanistan must take care of their own neighbours. See the world map thoroughly and then decide that what Afghan government is doing.

Just follow China too. Whenever china tries to build something in a region, like a pipeline, all of a sudden jihadis appear.

Drug addiction also doubled in Iran in 6 years: http://www.bbc.com/news/world-middle-east-40397727 The drug are coming of course from Afghanistan.

They are relocated in Afghanistan mainly to attack later on Iran and Russia.