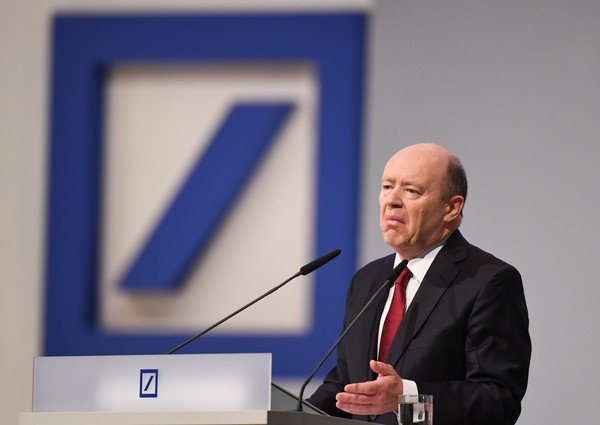 The German Deutsche Bank complained that the adoption of American regulatory provisions hurts European banks – it penalizes the local banks in many cases towards competition from overseas. European financial institutions have to be confident enough to set their own rules, German Bank chief Cryan stated.

The German Deutsche Bank warns that European financial institutions should not follow the US model of standard of regulation, Reuters reported. “We in Europe should be confident enough to establish rules that suit us,” CEO John Cryan said Tuesday at an economic congress in Berlin. The conditions on both sides of the Atlantic are different. The US banks have recovered more quickly after the financial crisis due to its strong home market. Although it is true that the politic wants to learn the lesson of the crisis, make the financial system safer and require a higher capital cushion, but for some time now the international regulation are putting a disproportionately burden on the European financial institutions.

Various requirements of the banking supervisors are making it difficult for banks to finance companies. What is applauded in public as severity towards the banks hurts at the end the corporate clients and with that the source of growth. He doesn’t want to turn back the regulation, Cryan said. The banks should in the future no longer have to rely on assistance from the state. But now the industry needs assurance: “It should not continue with the same pace of the recent years.” Existing rules should take effect first.

Concerns for Cryan and other bankers are in particular the plans of the Basel Committee to restrict the use of internal models. With these models financial institutions calculate how much equity they provide for certain transactions. In Germany, this possibility is important, as default rates are much lower for example in real estate loans than in the US, Cryan said recently at an investor conference in New York. If German banks would have to have in the future for these businesses significantly more equity, because of new rules, the business would “in one of the safest areas of banking” no longer work, warned Cryan.

Here is where it all started.

Even the Old Testament Jews understood how destructive usury is hence the practice of declaring a jubilee, and setting all debts aside every 7 years. The good news is that, throughout history, the Jew’s greed has always been his downfall.

I agree with you. And I for the most part like the ethnic-Hebrews of old. Even though they had their sins just like another other group. But these modern Zionist-Jewish collective is out of control and evil. Any group that was doing the things that they should should be stopped. Even if it was Irish people. But it is not Irish people, it happens to be Jews. https://www.youtube.com/watch?v=zLF3pjV9MmM

Tony B.
Reply to  XSFRGR

You are the foolish man. The U.S., like your country (whichever it is) is simply a franchise of the Rothschild cabal in the City of London. American banks don’t exist. They are all Rothschild bank franchises or they are shut down. Do a little homework and discover who REALLY controls the world.

XSFRGR
Reply to  Tony B.

Obviously, they don’t teach manners or civil discourse in the country that you come form, where ever that might be. How would you feel if I began my reply to you by saying, “Look, idiot, I’m well aware who owns, and controls almost all of the world’s central banks.” Not so nice, is it?

These “American regulations” come from the owners of the American prostitutes running the nation, that is the Rothschild cabal in the City of London. Go after the real enemies of mankind.