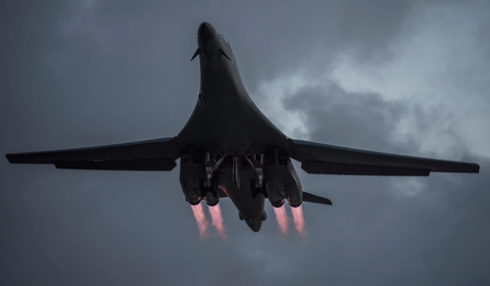 Tensions are again reaching boiling point over the Korean peninsula as the US has redeployed a US B-1B Lancer long-range strategic bomber there, ostensibly for more joint aerial drills with the south’s military, even after North Korea’s vehement denunciation of similar exercises earlier this month, which resulted in Kim Jong-un ordering a record number of ballistic missile tests.

“South Korea and the US conducted a joint air drill today with the US Air Force’s B-1B strategic bomber redeployed on the Korean Peninsula,” the South’s Joint Chiefs of Staff (JCS) confirmed in a Saturday statement.

The statement further indicated a number of fighter jets accompanied the 1B Lancer’s flight. “Some of the most advanced jets in the US and South Korean air forces, including the F-35 stealth fighter, also joined the drill,” it said. “Through this drill, we have once again demonstrated the joint military capacity of the South Korea-US alliance and Washington’s commitment to protecting the Korean Peninsula and providing extended deterrence,” the JCS added.

Crucially the new bomber redeployment comes the morning following another threatening North Korean ICBM launch amid warnings from the Kim regime of “fiercer military responses” to Washington to come.

North Korean state media identified that it was a Hwasong-17 ICBM – said to be capable of flying 9,320 miles, thus making it a significant threat and warning to the United States.

“Kim Jong Un solemnly declared that if the enemies continue to pose threats … our party and government will resolutely react to nukes with nuclear weapons and to total confrontation with all-out confrontation,” Pyongyang’s official Korean Central News Agency (KCNA) reported on Saturday.

Referencing the Hwasong-17, state media described it as “the most powerful and absolute nuclear deterrence” – further calling the missile “the strongest strategic weapon in the world.”

The Biden administration has apparently felt the need to flex American military might over the peninsula in tit-for-tat measure of late whenever these ramped up missile tests by the north occur, creating a continuing dangerous and unpredictable situation, also as Japan feels increasingly under threat, given in the recent past missiles have flown directly over the main island.

He shows that there is a future, or nuclear icbm`s

B-1’s are junk! They have a decent stand-off cruise missile package but are so susceptible to AAA and SAM missiles that they need to fire from extreme ranges. Complete garbage, never used in a US war since they were constructed except from laughable distances.

This shows US is still in charge, dominating and controlling both Korea and China, and nobody can do a shet about it.