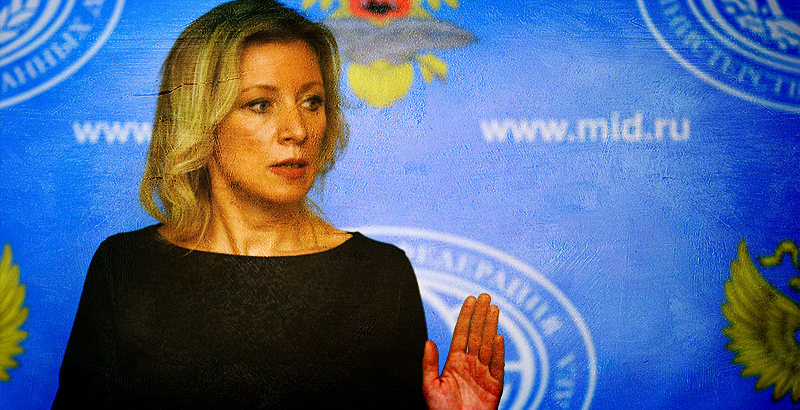 Maria Zakharova, the Director of the Information and Press Department of the Ministry of Foreign Affairs of the Russian Federation

After the suspension of bilateral contacts with Russia over the Syrian crisis by the United States, Moscow accused Washington of sabotaging the ceasefire deal, saying that the US will be responsible for any new terror attacks in Syria.

The US “has never exerted any real pressure on Jabhat Al-Nusra, done nothing for delineation to succeed and taken no action against its militants,“ the Russian Foreign Ministry said in a statement, adding that “We are becoming more convinced that in a pursuit of a much desired regime change in Damascus, Washington is ready to ‘make a deal with the devil’.”

The Russian Foreign Ministry emphasized that the US were also hampering Moscow’s efforts to stop the terrorists and called the US decision a “reflection” of the Obama administration’s inability to meet the key condition for Russia-US cooperation over Syria.

Jabhat al-Nusra has never been a part of any peace deal. However, the US “covers it with the shield of opposition groups which formally confirmed their participation in the cessation of hostilities.”

The full statement by the Russian Foreign Ministry:

We regret Washington’s decision to suspend its participation in bilateral channels with Russia that were established to sustain the Cessation of Hostilities in Syria. We deeply regret the statement issued by the US Department of State on the unilateral suspension of contact with Russia on the conflict in Syria, excluding communication to prevent air accidents.

Over the past few days, Foreign Minister Sergey Lavrov and US Secretary of State John Kerry have spoken on the phone many times and the two countries’ diplomatic missions in Geneva have been working to normalise the situation around Aleppo, where illegal armed groups have violated the ceasefire agreement. But ultimately our US partners decided not to support Russia’s intention to announce yet another 72-hour humanitarian pause in the hostilities in this region.

The United States also protested pulling government forces and militants away from Castello Road, although this was stipulated in the September 9 arrangement and would have allowed the delivery of humanitarian aid to eastern Aleppo. The Syrian government, acting in good will, was willing to pull back its forces and even started withdrawing them three weeks ago. But Washington was unable at that time and is unwilling now to ensure that the opposition forces it controls act likewise. The reason behind this could be Washington’s disregard for the humanitarian needs in Syria, which it only uses for political arguments, or its inability to influence the opposition forces.

Recent discussions between Russian and US officials have focused on Jabhat al-Nusra, which was never part of the cessation of hostilities. A few words about this group, its patrons and allies, and why the Obama Administration is not trying to separate the anti-government forces it sponsors from al-Nusra, a recognised terrorist organisation directly connected with  al- Qaeda that was involved in the terrible terrorist attacks in the United States 15 years ago. On the contrary, Washington is protecting this terrorist group through opposition forces that have officially announced their decision to join the ceasefire, even though CIA Director John Brennan promised in February to facilitate the separation of Syria’s moderate opposition from the terrorists as soon as possible.

We have seen clearly that al-Nusra has used previous humanitarian pauses to regroup, recruit new fighters and receive weapons and munitions from abroad, including with US assistance, as information available to us shows. Al-Nusra leaders have said openly that they used these pauses, including the period of “silence regime” that was announced on September 12, to prepare for new offensive operations such as the one they are now waging around Aleppo.

The United States has never put real pressure on Jabhat al-Nusra. It has done nothing to separate the moderate opposition from al-Nusra or to stop the front’s bloody attacks, and at the same time Washington actively prevented Russia from stopping these attacks.

Consequently, Washington’s decision to suspend talks with Russia on Syria is evidence of the Obama Administration’s inability to implement the key condition of continued cooperation with Russia aimed at settling the Syrian conflict. Or maybe the US administration never intended to do so. We increasingly believe that Washington, seeking to bring about a power change in Damascus, is ready to make a deal with the devil, that is, to join forces with outright terrorists who want to turn the tide of history and who are enforcing their inhuman values in the occupied territories.

We urge the United States to once again analyse the situation and the image US actions are creating in the world. The stakes are very high. If these US decisions make Syria vulnerable to new terrorist strikes, the blame will be on the White House. The choice rests with Washington, which should think carefully about the future the Syrian people will have.

And the U.S. has never bombed them in any serious manner. We brag that we have hit ISIS with something like 30,000+ sorties but try finding out how many sorties we have carried out against Jabhat Al Nusra in Syria. If you can find out then please tell me because I have never found it.

The only thing I found was that we basically stopped bombing them in 2013 because our ‘moderates’ asked us to. We probably launched a total of 50 or less sorties against them in 3yrs but this is a wild guess.

Its all contrived by the US. Terrorists only exist in the main if state actors like the US sponsor them. Very few of them are actually Syrian. Same modus operandi as Libya in terms of flooding the country with head choppers to create an illusion of rebellion.

Ultimately the degenerates in Washington don’t care how many die to get their gas pipeline in place as that is what’s its all about.

America building another Frankenstein in Syria , that they will loose control of , just like in Afghanistan with Al-Qaeda