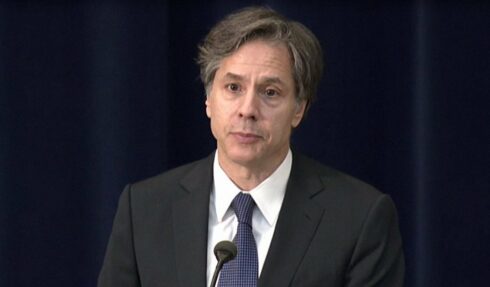 Blinken visits Berlin to introduce a new sanctions program against Russia and demands a pro-NATO stance on the part of German officials.

Washington continues to advance the idea of ​​establishing a new plan of severe sanctions against Russia over the Ukrainian crisis. Recently, US officials presented a draft of anti-Russian sanctions during a trip to Berlin. Considering the seriousness of the measures and the clear objective of suffocating Russia economically, the plan can be considered a real threat to international peace. In the same sense, the US delegation’s visit to Berlin seems to have been an attempt to coerce Berlin into adopting the same anti-Russian stance that Washington assumes.

An audacious package of sanctions against Russia was announced by US Secretary of State Antony Blinken during his last trip to Berlin last week. The program was developed by William Burns, top CIA official and former American ambassador in Russia, and has as its main objective to provoke a strong economic siege against Moscow in the face of escalating tensions in Ukraine in the coming months. Also, it is necessary to mention that in addition to economic measures, there are also sanctions in the diplomatic sphere, with the plan to reduce the number of foreign officers on Russian soil as much as possible.

Russian export capacity is the main target of the new sanctions package. Commodities and weapons are strategic points of high value in the Russian export economy – and the new program is aimed precisely at preventing other countries from being able to buy these products from Russia. According to data exposed by the German newspaper Bild, it is estimated that, if the sanctions are actually implemented, the total damage to Russia’s economy would be equivalent to more than 50 billion dollars – which is why, the newspaper concludes that “the US and the West… want to attack Russia’s role as the world’s largest supplier of raw materials”.

The Bild’s article also mentions that during his stay in Berlin, Blinken stated that the US wants to make all the points of the new package clear to Washington’s allies around the world, so that all measures are implemented. Blinken stated that the new restrictions are aimed at “blocking Russian trade routes around the world”, “blocking supply routes” used by Russia, and guaranteeing “a sharp reduction in the staff of Russian embassies in Western countries”. In the same sense, Blinken ignored all requests from German officials for the anti-Russian approach to be taken on a less hard and more diplomatic line, demanding unrestricted adherence to Washington’s project to suffocate Moscow.

Germany has very clear interests to ask for a more diplomatic approach to the situation: the gas issue. Berlin asks Washington for permission to establish a more lenient policy, promising that the operation of Nord Stream 2 will be paralyzed in eventual escalation in Ukraine, but ruling out the possibility of total cancellation of the energy cooperation. In turn, the US has resumed a stance of total opposition to the existence of the gas pipeline, considering it inadmissible under the current circumstances in Ukraine.

In the current situation, the US is, in a way, assuming the leadership position of a coalition opposing Berlin within the European continent. The sovereigntist stance of the German government, which wants to defend its own interests in the midst of the crisis between Russia and the West, does not only displease Washington, but also Poland and Ukraine itself, which want to maintain the monopoly of gas transport along the old routes. With the US-imposed boycott of the purchase of Russian gas by Germany, the Poland-Ukraine axis becomes the only option for Berlin. In the same vein, the UK, which has adopted a totally pro-Washington policy, supports all these measures and endorses the cancellation of Nord Stream 2 and its replacement with the old routes. With this, there is an axis forming between the US, UK, Poland and Ukraine to pressure Germany to fully adhere to anti-Russian measures.

On the other hand, Germany has the support of a part of the EU, for which a critical stance on the role of the US and NATO on the continent is increasingly indispensable. The German government feels pressured and is divided, as there are also many pro-Washington officials in the new administration – in addition to the fact that the EU itself is polarized in this regard. Berlin resists for the time being and continues to postpone indefinitely the sending of military aid to Ukraine, but it is clear that the German position within the European bloc no longer corresponds to its real relevance as European financial leader.

In fact, the EU continues to delay in taking a rigid position of distancing itself from NATO, despite the sovereigntist stance taken by the main European leaders, Germany and France, who are not willing to tolerate all NATO attitudes and their respective consequences. In this game, Germany is the most fragile part as its typical military weakness prevents it from guaranteeing the defense of its strategic interests. Blinken’s choice to travel to Berlin had a very clear meaning: increasing pressure for the new government to decline any stance inconsistent with NATO’s plans. If Berlin does not receive support from the rest of the European bloc, even its respectable financial power will not be enough for the country to continue defending its interests in the face of such external pressure.

It is unlikely that the new sanctions package presented by Blinken really depends on any escalation of tensions in Ukraine. Considering that even the movement of troops by Moscow within Russian territory itself is considered an “escalation” by Washington, it is very likely that sanctions will be implemented at some point. And that is why it urges the US’ former European allies to unite to defend their sovereign interests in the face of the growing US-UK-Poland-Ukraine axis.

Germany shoud kick the yankees out, close all the yankee bases, Ramstein closed, they will have a big problem with there criminal actions coordinated from Germany. The rest of europe must stand with germany and stop using the dollar who has no more value.

germany is a US colony since 45, this will not happen until the US will retreat by themself.

It would be good for Russia if they were kicked out of SWIFT. I don’t see many J NATO governments or J NATO surviving Russia being kicked out of swift

wide spread famine, all refrigerated food going bad (no one salts their meat the days) no heat, with hundreds of thousands freezing to death and 90% plus unemployment.

tens of million of Europeans will die. and much more.

It would be good for Russia to be kicked out of SWIFT by the USSA.JNATO the USSA and all NATO governments will prove they are the enemy of their own people.

I bet Russia and China are hoping it will happen.

JNATO will gone forever and the USSA kicked out of Europe for decades at least without Russia having to fire a shot. The USSA and JNATO and its Zio masters will never let Europe be free without there having to be millions of dead victims they have murdered.

I see the government of Croatia is worried they will not survive such a scenario and will withdraw from JNATO if there is any armed onclfict with Russia.

The Croatian government is worried about being hanged by their people in the scenario I just outlined. Also now Bulgaria and Hungary and even Poland

Croatia, Bulgaria, Hungary and Poland should not attack Russia.

“the US and the West… want to attack Russia’s role as the world’s largest supplier of raw materials”.

How successful has Uncle Sam been at cutting off Iranian crude oil exports?

If Uncle Sam were successful in restricting Russian raw materials exports US inflation, already thru the roof, would enter the stratosphere. Would the USA cut off its nose to spite its face? You bet it would!

U.S. cant block anything without a UN Resolution. Its wishful thinking.

Germany is an occupied country; the US and Britan own the Ukraine and it is a bridgehead to use against Russia