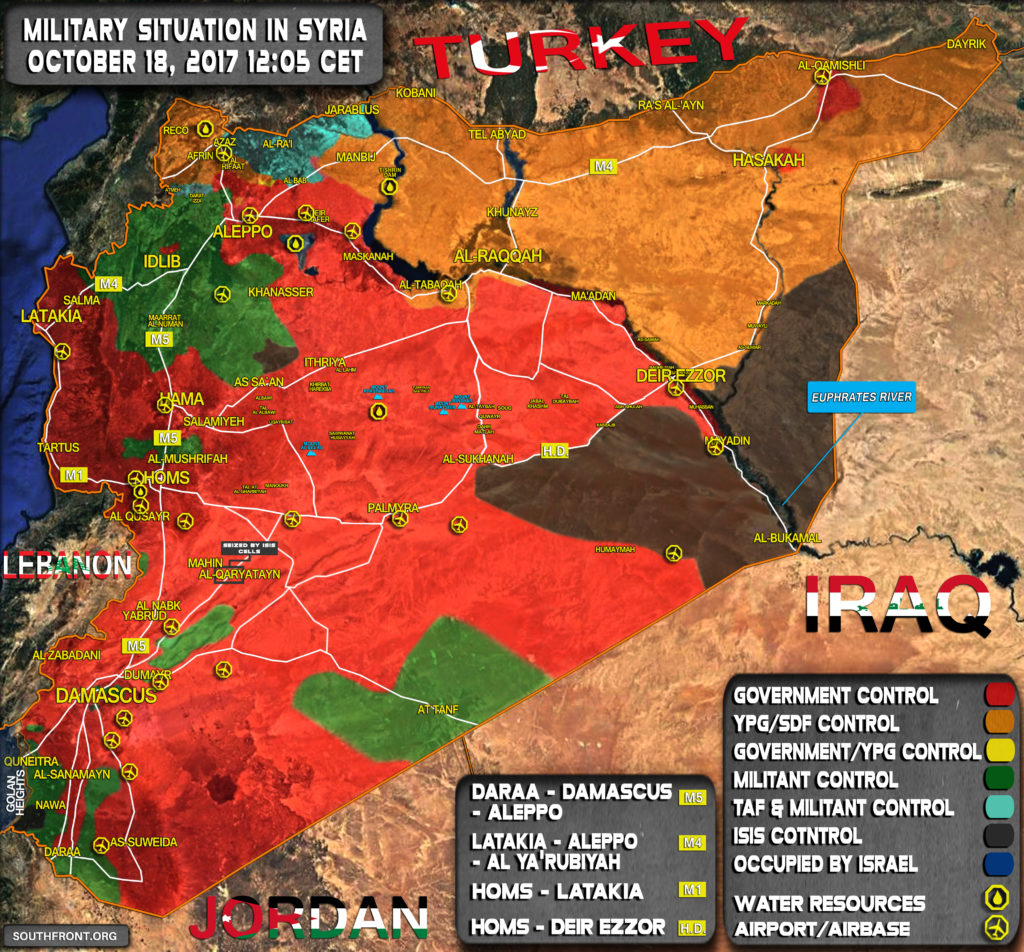 The US plans on staying in Raqqa and providing humanitarian aid after liberating it from ISIS, the US Department of State Spokesperson Heather Nauert said at a press-conference on October 18.

“The liberation of Raqqa from ISIS’s brutal control is near,” she said. “We estimate that Raqqa is now 90 percent cleared and we are continuing to support our Syrian Democratic Forces to pressure the few areas where pockets of ISIS fighters now remain.”

She added that once Raqqa is liberated, the US along with its coalition partners will work on demining the city first. Following that, getting electricity up and clean water running is the priority. Nauert compared the process to the one in Mosul.

“The United States and our allies have prepared for next steps and will continue to work with partners to provide humanitarian assistance to those in need and support the stabilization efforts in Raqqa and other liberated areas to include the removal of explosives left behind by ISIS, restoring basic services, and supporting local governing bodies,” Nauert said.

The siege of Raqqa took four months, mainly conducted by the Kurdish-dominated Syrian Democratic Forces (SDF) heavily depending on the US-led coalition’s military assistance. The Independent previously reported the same day that SDF have liberated Raqqa, the de-facto ISIS capital, despite still facing pockets of resistance.

This statement may seem fairly innocuous, but in reality it is a serious declaration of intent. The US are set on staying in Syria, with the SDF acting out as their proxy in order to maintain its political presence using the “Kurdish question”.

Most likely “an independent state” in the SDF-held area is out of the question, but it may just become a heavily US-affiliated enclave, which will generate a lot of problems for all the neighboring countries just by virtue of existing. This is a possibility that would potentially become very troublesome, unless some sort of agreement could be reached among the global and local players involved in the conflict.

After ISIS is fully buried in the desert SDF should get the same treatment. Just another terrorist group.

Yep! Israel and oil are powerful influences to the empire. Anything the US can do to destroy a country and deprive it’s people of a peaceful and prosperous life, will be done.

The way to get rid of the US is to beat them at the UN.This will require careful maneuvering and planning to place the US in an undefendable position. This can be achieved by various types of procedures and processes that could eliminate the necessity of the US embedding themselves further into the situation. They could bring about the eventual forced withdrawal of the US from Syria and Iraq.

Whatever. Anything USA does at this point won’t prevent the end of the US ability to leech free resources from the rest of the worlds economy and a domestic implosion.

And may that “credible process” be? Speaking with a forked tongue, it seems.

The only reason for their hasty declaration of victory in Raqqa could be the fact that SDF numbers is so thin, they need to deploy as much SDF militia in Raqqa as possible in DeZ.

Well said. Forked tongue is what’s expected from those snakeheads.

I wonder in how the U.S willing to help the Kurds when Iraq and Turkey request them to leave. The ideal a destroy Iraq will prolonged The U.S. stayed in Iraq is obsurd. That’s a wrongful calculations.we all k ow they will leave Turkey as soon they declare to stay in Syria to help the Kurds create a states,so they on my option to Acces such region is Iraq.The U.S. military planner are getting dumber and dumber.

The “Big Four” nations that have just told the Kurds – No , need to sit together in Asana , and ask the US to Go .

Raqqa like Faluja a couple years back and Mosul more recently were not liberated.These cities were destroyed by the US

They will hold referendum to unite with krg later.

Rob Centros
Reply to  as

I don’t know. That referendum in Iraq didn’t work out so well.

Just like USA thinking they can create a 3rd political party and win the Crime House…err… Whitehouse. It’s fixed for sure….and Barzahni is crying he got no Vaseline or warning… Just bent over.

US are chicken cowards to fight a bear equal. They live to strut and kick assessment of the downtrodden. They treat their own people like dirt… Recent False Flag in Vegas …a City crippled financially since 2008 market collapse. Numerous Big name Casinos in revolving bankruptcy recovery since 2008. Americans are burried in debt…Consumer economy on life support with as Tillerson says… A Moron as leader. I wish Hidden did exist. … Enough prayers. …and he let’s the Yellowstone supervolcano erupt and send Uncle Shlomo to his deserved doom.

Masoud is going to nullify it and take another 2 year extension, he has done this for 14 years already.

This would cost the US quite a bit, to maintain a longterm presence in Syria. The Kurds really don´t have a viable way of supporting the area. The oil would help a lot but, only temporarily. Even then, unless they grab a whole lot more of it and secure transit routes, they have nothing. The Kurds are not in a good position and Iraq is just a taste of what could go down for them in Syria. Time will tell so, I am stocked up on patience and popcorn, to watch this thing through to the finish. I wish well to all.

That’s what the future holds for Syria. US and Saudi will stuff Sunni into Syria via Kurd region… Some will remain in Kurd region…others to rest of Syria. Next is forced Political crisis where US can control the media to undermine Assad/Damascus. Create offenses which bring continued UN sanctions. Eventually the US tumbles Syria politically. …..just like Deepstate blow JFK away. The mid east is treachery zone of opportunist. Notice that trash Moqtada al Sadr who denounced PMU and Assad…then parties with Saudis I can’t keep up with how deranged the people in this region of Crime planet….3rd from the Sun are! Iran’s been immigrating Shia into Syria….especially after IRGC secured numerous Shia enclaves and Mosque. That’s what Israhell fears. …Shia numeric increase. Putin have 1000 Saudi Evil over for a visit is disturbing. Saudi still send mercs,weapons and money to murder Syrians… Putin gives them a banquet. This war is FUBAR

I don´t know if the US is going to be able to work it´s way out of a paper bag. This F-35/S-200 thing is getting way out of hand right now and it is showing a lot of cracks, in the US/Israeli drives and deals over there. It will take a little bit for the dust to settle. We will see how it is in a few weeks. My best to you Brad.

What bullshit. The US will continue to do the bidding of the Rothschild Zionist to create perpetual unrest in the Levant until each nation outside of Israel is reduced to rubble like Iraq and Syria. The US government can no longer be trusted in anything it says at home and abroad. Together with Britain, Israel, and puppet Saudi Arabia, the US has created and armed countless insurgents and mercs from the Muslim Brotherhood and from their own created front organizations. Their agenda will not change and it is one of continued war until the land and the oil pot are taken and the people are dispersed. In the Muslims had a more tolerant view to Christianity they would get more support from the West, but they appear just as hostile as the Zionists.

That collage is worth more than a thousand words Richard. Bravo.

Nicely done Richard. Your collage depicts accurately the plan laid out by Lord Rothschild in his recent interview on the 100th anniversary of the Balfour declaration, when he stated that “Israel should be generous towards its’ less fortunate neighbours.” To turn the middle east into a region of unfortunate neighbours has been the zionist goal since then.

as
Reply to  Fred

Wrong. If someone dropped a tons of Assault riffles here tons of anti tank missiles there and make sure some radical, violent, or extremist group (antifa, blm, kkk, neo nazi, evangelical extremist, etc etc) can find them and then create a paralyzing chaos through sanctions, false flags, or political subversion any country can falls into lawless state.

SDF IS THIEF AND SALVE OF ZIONIST. WHAT HAPPEN TO BARZAMO KURDS IN IRAQ SAMETHING WILL HAPPEN TO YPG/PKK/SDF/PYD IN SYRIA . AND US WILL DO NOTHING. THE ONLY THING KURDS IN SYRIA SHOULD NOT FALL FOR THIS ZIONIST WHO WILL CREATE MORE PROBLEM FOR THEM. TURKEY/SYRIA AND IRAQ WILL CLOSE ALL BORDER WITH THEM AND US /ISRAEL WILL JUST LOOK AND NOTHING WILL DO . KURDS OF SYRIA SHOULD STAY UNITED IN SYRIA . ASAAD GOVERMENT WIL AGRE TO KURDS TO HAVE SELF RLE IN NORTH. AND SHARE RESOURCE BUT IF YPG/SDF LISTEN AND STEAL RESOURCE THEN WILL BE BIG PROBLEM

That was predicted all awhile. We must be naive to think otherwise.

USA must leave Syria with immediate effect and stop abusing money through useless drills and unrest in Korean Peninsula.USA must pay Syrian infrastructure and lost civilian life compensation damage fees to UN.USA empowering of rebels in Syria controbutes to rebellion and disunity in Syria.All the abuse terrorist must form a united front against Zionist USA.Just take they money if their bribe you to kill fellow ARABS and attack USA installations.

Syria needs to take the Tabqa Dam back now!…. Do not allow the US time to consolidate that Dam in some Humanitarian region recovery canard. Russia can effect this with Airlift,Special forces and TAC Air. This should have been done weeks ago…

Syria’s gonna end up all beat down and back of the bus like Serbia.. if Putin stays with the pillow talk and walk. Iran could help…US would see the build up and act…Cuz it’s Iran. If Putin gives the word. …it happens suddenly….and there’s nothing US can do to stop it.

Having troops in a country where you are unwanted is illegal US! Get out of Syria!!!

What the U.S. Empire *wants* and what it *gets* in the Middle East are increasingly diverging.

As we’ve seen in Iraq, the Kurds are paper tigers. They look strong when the U.S. orders their ISIS puppets to “stand down” and let their SDF puppets “win.” Not so much so when they actually have to fight.

All those Kurd mercenaries who fought (and died) to create rojava just got betrayed by the US. A local government is not a Kurdish government, because the population is Arab.

At least the Kurds didn’t take too much casualties. As mercenaries, they should have known what they signed up for.

It is clear US support to win the mind anti Assad and upset it allay like Turkey and Iraq because these countries will never accept the Kurds state near their country what it will encourage Kurds in Turkey to wage war against Turkey which means US wants to destabilise other countries.