US paratroopers have carried out a series of ground and air raids in the Yemeni village of Yakla in Bayda province. 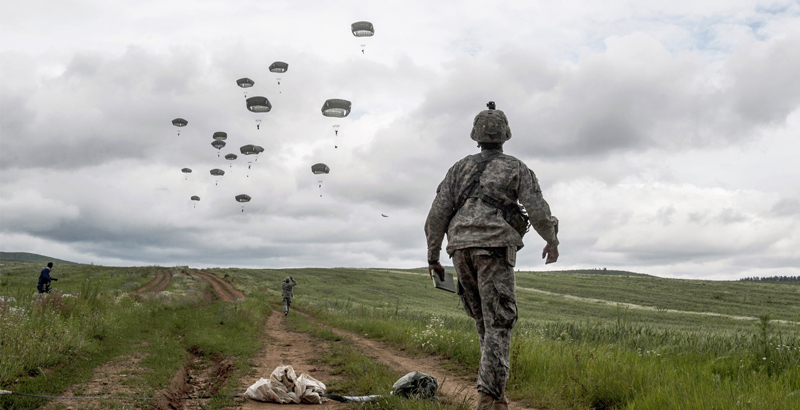 US paratroopers of the Army’s 4th 25 Infantry Brigade Combat Team (Airborne), part of the NATO-led peacekeeping mission in Kosovo (KFOR), jump with parachutes during a military drill near the village of Ramjan on May 27, 2015 (Photo: Getty Images / Armend Nimani)

A series of ground and air raids has been carried out by US paratroopers in the Yemeni village of Yakla, located in Qifah district of Bayda province, a number of media reported. Reportedly, about 30 aircraft, such as the Apache helicopters and unmanned aerial vehicles, took part in the attack. As a result, 57 people, including civilians, were killed.

According to Saudi media, there were 16 civilians, including women and children, among killed during the assault. The rest part of killed was represented by al-Qaeda terrorists, including its three ringleaders.

“The operation began at dawn when a drone bombed the home of [al-Qaeda ringleader] Abdulraoof al-Dhahab and then helicopters flew up and unloaded paratroopers at his house and killed everyone inside,” the AFP news agency quoted the words of an unnamed local resident.

As the Lebanese al-Mayadeen TV-channel reported, one US soldier lost his life during clashes with terrorists.

Later on Sunday, US military announced that one US soldier was killed and three others were wounded during the raids.

“We are deeply saddened by the loss of one of our elite service members,” AFP quoted the words of the Chief of the US Central Command in Tampa (Florida), General Joseph Votel.

The General added that the name of the deceased soldier would be announced after his relatives have been notified.

Two years ago, a similar operation was conducted by the US forces in the Yemeni province of Hadhramaut. The operation was allegedly aimed on rescue of an American reporter, who was held captive by al-Qaeda terrorists. However, the operation was unsuccessful and the journalist was killed.

Meanwhile, the Houthi-Saleh alliance launched several rocket attacks on positions of Saudi mercenaries in Shabwah province. As a result, a large number of Saudi fighters were killed and wounded.

In addition, about 50 Saudi mercenaries, including foreign nationals, lost their lives or were wounded during fierce clashes with the Houthi-Saleh forces in Dhubab district and Mokha city, located in Ta’izz province. Downtown of Zanzibar city, located in Abyan province, also became the object of three Saudi rocket attacks.

America didn’t learn their lesson yet

Which lesson is that?

US Interference in the middle east will never have good results. Killing more muslims then wondering why muslims becoming radicalized.

Muslims are radicalized by the Koran

Obviously op did not go smoothly. Seal team 6 landed on target but got engaged by others? Leading to higher death toll. Trump wants to make show of force against Al Qaeda. But CENTCOM seems to have a problem with mission planning.

They had 1 dead and 3 wounded and from what it seems they wrecked the enemy Al Qaeda commanders and their guards.

Seal Team 6 was disbanded shortly after the Vietnam war. The media was fed a false narrative to prevent investigative journalist from digging deeper. The raid in Pakistan was done by CIA-Civilian-Contractors. Putin knows this, so does Russian and Pakistani and UK and Iranian intelligence. The movie is (conditioning) or what others call as “Propaganda-narrative”.

Your claim that Seal Team 6 does not exist, good luck with that. In taking of Bin Laden in Pakistan, CIA provided the intel. Do you have special connections for info?

ST6 was disabanded. But this is only 1 little group within seals.

Seal team 6 was created after the desert one iranian fiasco , not during vietnam war.

the counter terorrist oriented ST6 was then renamed to DEVGRU , not disbanded..

1 dead and 3 wounded is a high toll for a door kicking operation to kill an Al Qaeda leader. It reflects the lack of tactical and operational nous from the Americans. In a country at war like Yemen , all you need to do is pay the right people to kill for you. Any of several warlords in Yemen would have done the job for the CIA and provided a head as proof. This could have been achieved for as little as a million dollars , far less than the cost of fuel , ordnance and maintenance for helicopters and drones used in the strike. Considering the loss of an elite operator and the cost of hospitalization for the wounded , this is a very costly operation indeed for USSOCOM. Everybody knows the Americans were there , and killed civilians as well which is a hearts and minds victory for Al Qaeda. A new leader will take the dead leader’s place and more recruits will come from the families’ of the dead civilians. Definitely not the way to fight this war. One wonders what the US military has learned after 15 years of such operations.

The US military and government do this because they can, repeatedly, go round the world attacking and killing innocent people they classify as “those who would do us harm ” or ” threaten American lives ” or ” pose a threat to our homeland ” or whatever ad nauseam. This is the brutal reality of uncontrolled military power, now exercised by neo warmongers and a pathological psychotic POTUS (sorry Donald your honeymoon is over ). Unless and until the collective insanity of accepting the US dollar as the worlds reserve currency ends, the US is being bankrolled by the rest of the world to fund permanent wars. Dump the dollar and the US will lose its ridiculous monetary monopoly and power very, very, quickly.

You don’t know the circumstances and it’s not as simple as you suggest regarding hiring locals.

The civilians were not killed deliberately but you’re right it causes hard feelings.

Why we’re doing anything there is the big question.

The Americans killed several women and children including Anwar Al-Awlaki’s 8 year old daughter… The Americans killed her father and brother years ago and now her.. 8 years old guys. This is absolutely disguisting. They were reportedly found with several gunshot wounds. 1 US service man died and they had the audacity to call him a hero.

Sorry CJ, this is normal US spin – Arab civilian deaths do not register – whether from drones, air strikes or ground attack all are “enemy combatants killed on the battlefield ” Nothing changed since Vietnam war, remember My Lai – killers treated as heroes same in Israel

Nothing changed since World war Two. German and Italian and Iranian and Iraqi deaths do not register. Millions of indigenous Germanic tribal peoples were being ethnically cleansed before WW-2 and during and more after. The US and UK and USSR never cared. It is just the same Allied policies of not caring today that have been going on since the burning of Atlanta city along with its population of thousands as it was deliberately burned to the ground with nothing bust civilians inside of it. http://ihr.org/

But the Syrians are monsters because the use “barrel bombs,” some uniquely diabolical weapon of war it seems. If the bomb you drop is painted and looks like a bomb should look, then it’s OK.

All US military personal should be treated as ‘terrorist’.

Those involved in My Lai were not treated as heroes.

Then they wonder why people becoming radicals…what a shamefull act

We don’t know what that GI did in that action. The term is loosely used but not in all cases.

Death squadrons against kebabs.A dream come true.They dont give a fuck about our children being rolled over and even steal from their corpses.No mercy ! Deus vult !

US Military actions = more civilians deaths. A Yemeni civil war fought over kicking out a US puppet president who allowed the US to murder Yemenis with drones being fought by mercenaries of the perfumed princes of the House of Saud and US paratroopers? Who’s on first?

Excellent summary CDW, add in the UAE with their shiny Leclerc tanks and French & Australian contract/seconded officers. Ironic that during the 1960s civil wars in Yemen (Royalist Zaidi Dynasty versus Republicans), the Saudis/British/French/Israelis all supported the very same Zaidi Shia they are now trying to destroy !

Thank you:) That’s even worse.

I’m sure this is crystal clear to the recent graduates in Area 51or Haight Ashbury. Abuqahwa’s comment is just the special sauce on this concoction