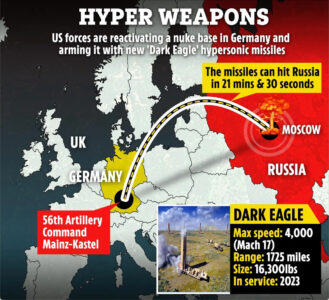 Much attention lately has been focused on a series of Chinese hypersonic weapons tests. Let’s now shift our attention to the US and Russia, where the Pentagon has reactivated a nuclear unit, based in Mainz-Kastel, western Germany, that will soon be able to launch 4,000 mph hypersonic weapons aimed at Moscow, according to The Sun.

For the first time in decades, the 56th Artillery Command is armed with “Dark Eagle” long-range hypersonic missiles that can strike Moscow in 21 minutes and 30 seconds. The last time the command was fully operational was in 1991, right before the Soviet Union collapsed.

“From a blank piece of paper in March 2019, we, along with our industry partners and joint services, delivered this hardware in just over two years. Now, Soldiers can begin training,” Lt. Gen. L. Neil Thurgood said in a statement.

The reactivation reveals increasing concerns among Pentagon officials that Russia has outgunned the US and NATO in Europe with advanced hypersonic weapons. There are mounting issues in the region where Russia has positioned 100k troops on the Ukraine border, and tensions between Russian-backed Belarus and Poland have resulted in waves of migrants attempting to storm Europe.

The commanding general of the artillery unit, General Stephen Maranian, said the reactivation would “provide the US Army Europe and Africa with significant capabilities in multi-domain operations.”

Separate from Dark Eagle, the 56th Artillery Command will also receive an array of weapons, including the ground-launched version of the Tomahawk cruise missile.

Hypersonic missiles could be a game-changer for NATO because the world’s most advanced missile defense shields have trouble shooting down these weapons due to high speeds and an unpredictable flight path.

China and Russia are both ahead in the hypersonic race when compared to the US. The FT released a series of reports last month that left US intelligence and military officials stunned by Chinese hypersonic tests.

Washington’s hypersonic missile plan for Germany suggests an inevitable Cold War is ahead, one where the development of hypersonic weapons and fifth-generation fighter jets will be a competition among global superpowers.

The end
Reply to  Rhodium 10

If I would be Russian and if only one nuke would come from Germany, that would be the end of Germany for all ages and all Reichs, and all futures and all virtual realities.. I would go berserk in flattening standard… and above all, those stupid Germans are paying for all of it.

Xsayarsa
Reply to  The end

Fiat ! Add the yanks to the basket too.

Who the hell are these guys?? Why don’t you earn alone and in peace?? You are becoming a nuisance

what will protect the MIG-31? 10 SU-35’s? How many aircraft would the USA have in that area? Remember, in 1990 the world only first saw the F117 stealth fighter. it was commissioned 10 years before. The world first saw cruise missiles. They were also 10 years old tech.

The USA does not forecast its secret weapons and display them to the world for a sign of strength. Of course the USA has hypersonic weapons. The AGM-183A is 17 times the speed of sound. Mach 17. The USA has likely had Hypersonic aircraft since the 1960’s.

Then there is the Boeing X-51.

Dont be a fool. Most chinese and Russian tech is copied, stolen, hacked and bought.

All this is doing is putting Germany in danger.

Well they deserve it,they have pimped their Country to the US Reich.

You’re right, but Germany has loyal Hezbollah supporters who make it loud and clear, don’t want them to get hurt

As if they had a choice in this matter. Did they?

I wouldn’t bark about too much. Putin has stated that all decision making centers are in croshair, if someone attack to Russia, including Washington.

Can’t wait for the “Dark Eagle” to meet the s500, or maybe this shit American technology won’t even be able to make it to Russia just like the rest of their overpriced bad performance technology

They’ve been doing this since 1959 with pilots inside them lol. Of course they’ve got them

Russia needs to place Hyper missiles in Cuba and Venezuela

More propaganda from the evil empire, for they don’t even have a hypersonic missile, nor will they for years down the road.

Is it called the Dark Eagle because you can’t see it because it does not exist. The US is in the research phase not the deployment stage.

Evil US and Gay Germany cannot win against Christian Russia.

I just read a slightly different take on The Drive. What they got was the missile launchers but no missiles for training purposes.

The launcher is basically a hitch to a semi truck and haul around.

So the real news here is American soldiers are now towing a trailer around Germany pretending to launch missiles that don’t exist yet … that ought to teach those Ruskies!

US transgender military 485,000 subspecies than not qualified to work at Macdonalds

They will need a lot of Dark Eagles to contain all those migrants, and France won’t be too happy having all their invading migrants being blown to bits by US hypersonic missiles. That is who the missiles are for, isn’t it, lol.

I’m sure Russia has it’s reasons for it’s strategy, but I would’ve thought they would respond much more aggressively to these kind of threats. It seems the West, and the Globalists that manipulate them, are set on destroying Russia one way or another.

Perhaps they need to abandon any economic cooperation and start using asymmetrical warfare. Isolate these countries, any communication means, and any shipping/transport. Force them to abandon hosting any US military infrastructure and personnel.

White Jesus is a Chick
Reply to  James

Actually we are hoping that Russia and USA gets Germany nuked now with all the Arab terrorist rapists running around wily nily with no government agency to monitor their inbred insanity. Sorry Germany you gotz toz bez nukedz nowz jerryz.

Digby
Reply to  White Jesus is a Chick

The US doesn’t have a moral leg to stand on. Many of those ‘Arab terrorist rapists’ were a result of US invasions of Middle Eastern countries, weren’t they?

21 one minuts and 30 seconds ain´t fast enough to attack Russia and survive, It will be a suicide since Russia can counter strike and destroy the enemy even before the missiles get in it´s border.