The Pentagon’s Strategic Command has held the most wide-scale drills of the US strategic nuclear forces in Europe for recent years. 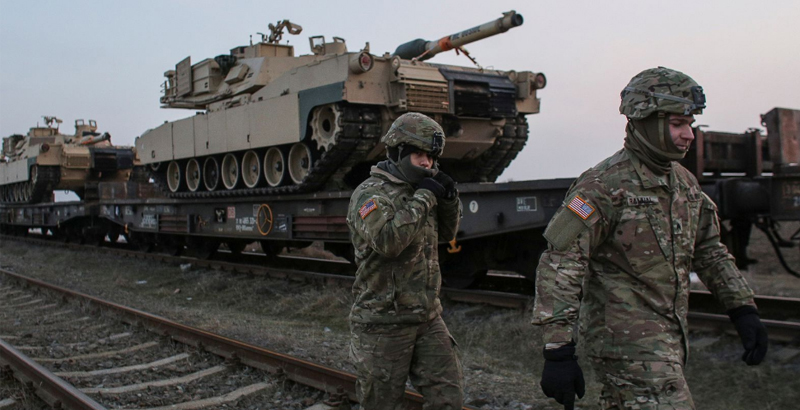 In February, US military held the most wide-scale drills of the US strategic nuclear forces for recent years, the Izvestiya newspaper reported. In the course of the exercises, servicemen worked over a scenario of an escalation of a hybrid conflict in Europe in a global nuclear war, involving the US. Experts believe that the maneuvers’ scale and choice of a potential enemy could be a response to the last year’s exercises of the Russian nuclear forces.

Last week, US military summarized the drills of the Strategic Command, held from February 7 to February 17. Its responsibility includes strategic deterrence, carrying out of ‘global strike’ (with nuclear and non-nuclear means), space operations and ballistic missile defense. During these maneuvers, named Global Lightning 17, actions in the event of a conflict with another nuclear-weapon state on the European theater of military operations were practiced.

The Pentagon did not disclose which country was considered as a conventional enemy. Officially, it was a whole set of threats in all areas of responsibility of the Strategic Command. However, the exercises of the strategic forces were held in parallel with the Austere Challenge 17 command and staff exercises, during which defense of the European allies against aggression with usage of conventional weapons was practiced. According to media reports, the Global Lightning 17’s scenario also suggested an escalation of the hybrid conflict on the European theater of military operations in a global war with usage of nuclear weapons. However, on this theater of military operations the US strategic forces have only one possible enemy – Russia.

It is noteworthy that before only one variant of warfighting was practiced during exercises of the strategic command, for example, carrying out of a disarming nuclear strike on a potential aggressor or a retaliatory nuclear strike. This time, all possible schemes were practiced. Officers from Australia, Canada, Denmark and the UK took part in the exercises.

The Strategic Command used not only computer simulations. During the exercises, four Trident-II sea-based intercontinental ballistic missiles were fired from submarines in the Pacific Ocean, and one ground-based missile was launched from the Vandenberg military base in California.

As a former chief of the Staff of the Russian Strategic Missile Forces Viktor Esin told Izvestiya, though, these military exercises have a regular and planned nature, this year, the drills were distinguished by its large scale.

The expert did not rule out that US military, who have long been lobbying an increase in the US defense budget, tried to show their possibilities to the new administration, headed by Donald Trump.

According to Esin, if the information about the connection between the military exercise and a hypothetical conflict in Europe is confirmed, then this should be taken very seriously.

“A standard scenario of such exercises suggests that strategic settings, which push to use nuclear weapons, are created in this or that region, however, previously [they] tried to avoid reference to the European theater of military operations or practiced only defensive scenarios,” the former chief of the Staff of the Russian Strategic Missile Forces said.

According to observers, the holding the large-scale exercises of the strategic forces amid the crisis in US-Russian relations indicates that urgent actions in order to reduce tensions and reconcile of issues are needed to be taken, especially in the field of European security.

In the pursuit of primacy by the U.S./NATO/allied bloc, despite exercises/preparations for a potential worst case scenario by opposing nuclear armed powers, policies and actions of this bloc continue in the direction of gradual escalation (unfortunately being the logical progression of conflict when dominance is sought). But brinkmanship has its limits. Certain actions necessitate a response. Similarly, in certain situations the imperative to strike first (for example, if war is assessed as inevitable) increase the probability of the current proxy war format (also involving economic warfare, information warfare, etc.) transitioning to a direct military conflict.

It seems Western bloc policies continue to be based on desired outcomes (wishful thinking) rather than probable outcomes. In this context, it comes as no surprise that Australia participated in the latest nuclear war exercises. Australian policies and actions are not only fully aligned with the U.S./NATO bloc but are becoming increasingly hawkish.

The language of punching above their weight is commonly used in Australian political and military circles. Indeed, Australian policy is emboldened in the belief that their geographic isolation and alliance with the U.S./NATO bloc protects them from significant consequences as they engage in the broader hawkish policies of their allies (U.S., NATO and Israeli officials work in collaboration with the Australians in the development of strategic policy, in particular foreign operations and the enhancement of ‘force posture’ capabilities). If a worst case scenario were to eventuate (despite efforts to prevent this scenario), the strategic forces of the Russian Federation (and China) may prove otherwise.

Note: It is important to recognise that Australia will continue to augment allied military operations. The ongoing increased hosting of U.S./allied forces (including nuclear capable air/naval assets with Australia integrated into the U.S. ‘Air-Sea Battle’ plan [potential war against China defined by various analysts as increasingly probable]), its integration into allied military/missile architecture and its adversarial actions towards the Russian Federation (Australian media continue to wage an information war; Australian support of Ukraine including plans to enhance military cooperation/assistance; etc.), well establishes Australia as a firm partner of the U.S./NATO bloc and, as reinforced through its policies and actions, an geostrategic adversary of Russia. It is reasonable to expect the polices (including of strategic forces if necessary) of Russia and China will quietly be adjusted accordingly.