Two earlier ones achieved virtually nothing toward stepping back from the brink on the Korean peninsula toward regional peace, stability, and normalized bilateral relations. 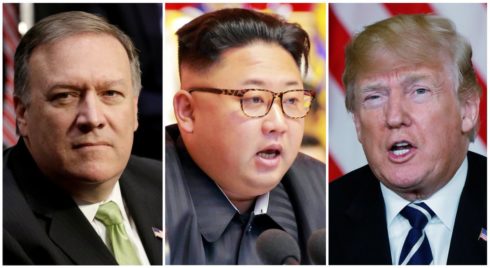 Pyongyang knows what it’s up against in dealing with the most hardline regime in US history. It doesn’t negotiate. It demands, notably what extremists Pompeo and Bolton are all about.

In early April, Kim Jong-un said a third summit with Trump like failure in Hanoi “is not inviting to us.” It ended abruptly with no resolution of major differences, no final statement.

Negotiations broke down because of unacceptable Trump regime demands in return for hollow promises alone, no show of good faith against the backdrop of DLT’s pullout from the JCPOA nuclear deal with Iran and 1987 INF Treaty with Russia – based on Big Lies when announced.

Kim asked Trump for partial sanctions relief alone, wanting only those affecting North Korea’s economy lifted – yet was turned down because Pompeo and Bolton rejected the concession, showing the futility of negotiating with US hardliners.

Following the failed Hanoi summit, Vice Foreign Minister Choe Son Hui said “(w)e have no intention to yield to the (one-sided) US demands in any form, nor are we willing to engage in negotiations of this kind,” adding:

Pompeo and Bolton “created the atmosphere of hostility and mistrust and, therefore, obstructed the constructive effort for negotiations between the supreme leaders of North Korea and the United States.”

Kim accused Trump regime officials of aborting a chance to resolve differences between both countries, expressing deep disappointment over failed talks, adding personal relations between him and Trump are “still good and the chemistry is mysteriously wonderful.”

On Wednesday, North Korea’s Foreign Ministry called Pompeo “reckless,” wanting him replaced if further talks with Trump are held, saying if he’s involved, “the table will be lousy once again and the talks will become entangled.”

They achieved nothing “whenever (he) poke(d) his nose in.” If talks with the US are resumed, Pyongyang “wish(es) our dialogue counterpart would not be Pompeo” – instead, someone “more careful and mature” to deal with.

“We cannot be aware of (his) ulterior motive behind his self-indulgence in reckless remarks; whether he is indeed unable to understand words properly or just pretending on purpose.”

What’s entirely reasonable to demand is impossible to achieve in dealing with US hardliners – demanding everything, offering nothing in return but empty promises to be broken.

NYT accidentally reveals that, the Skripals ‘poisoning with military grade nerve agent ” was a HOAX like the Russian Collusion and Russia “hacking” was concocted by CIA/MI6 to get, Zionald chumpinstein to expel Russian Diplomats/.It is laughable that a POTUS doe snot read FACTS.

Kim should put forward a demand for reparations for the wanton destruction in 1950 – 1953 moronistan caused in what is now north korea, to start with. will amount to a few trillion bucks but he should ask for it in gold.

Yeah, I pity the NK whom have to encounter this creeps, creeps whom have managed to threat everybody, and says things that makes my jaw hurt, one jaw dropping nonsense to the next day with even more jaw dropping bullshit.

And the masters them self of an epic increase in verbal diareea, the P & B, is not even wurth the space they fill in this world, total scums, and by all the definitions aviable to man kind, genuine scums, yeah, should have been given the Noble Piss price, just watch, it may come, the montain monkyes of Norway, is stil capable of knucle dragging stupidity to surpircingly new and soaring heights, never underestemate their stupdity. And then we have above all, an vilage idiot from NY. With the two monkies from Hell, yapping along, yup, what could possibly go wrong, right.

Nope, sorry the rest, basically the west is so mofo spineless. But never the less I hope and know the future is bright, and to unite with the S, when the end goal is agreed upon, so why rush. They have my deepest respect, never give in and never give up.

Blessed be the peacemakers.

N. Korea, let US howl at the moon and make empty threats, Russia and China will be helping you and stand with you.