The US has once again postponed the commissioning of the most expensive warship in the history. The $13-billion USS Gerald R. Ford did not pass the tests of readiness for combat operations. 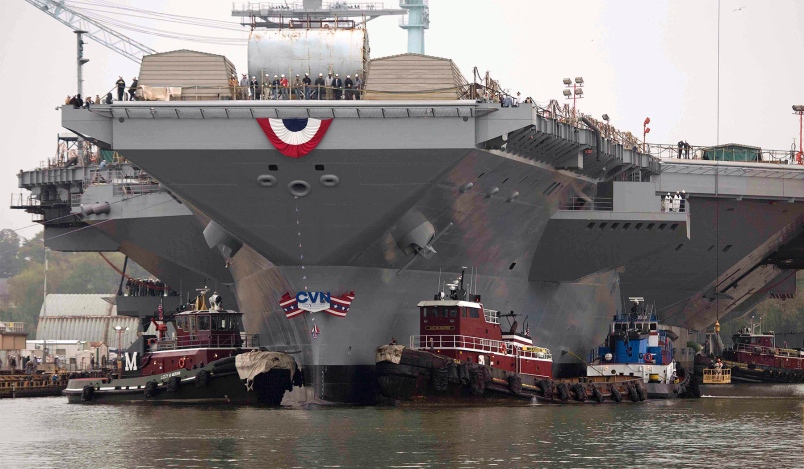 The commissioning of the USS Gerald R. Ford (CVN-78) may be postponed for 2017, a US Navy official told CNN. The aircraft carrier couldn’t pass all the tests of readiness for combat operations. Initially, the $13-billion warship that CNN calls the most expensive one in history, was expected to join the fleet in September 2014.

According to a June 28 memo obtained by CNN, Michael Gilmore, the Defense Department’s director of operational test and evaluation, said the most expensive warship in history continues to struggle launching and recovering aircraft, moving onboard munitions, conducting air traffic control and with ship self-defense.

“These four systems affect major areas of flight operations. Unless these issues are resolved … they will significantly limit CVN-78’s ability to conduct combat operations,” Gilmore wrote in his report to Pentagon and Navy weapons buyers Frank Kendall and Sean Stackley.

According to Gilmore, fixing these problems would likely require redesigning the carrier’s aircraft launch and recovery systems. This process could result in another delay for the commissioning of the warship. The US Navy suggested that the aircraft carrier may be delivered by September 2014. Then this date was moved for September 2016 and then for November 2016.

Don´t waste it, send it out as a gigantic plant holder. They can also grow mushrooms in the hanger deck for the design team while they are at it. Just thinking positive!

Would make a nice addition to a reef somewhere

All they need to complete the fiasco is to add the JSF (Joke Strike Fighter). A ship that can’t operate with a plane that is limited.

Ignoring all the many issues it has its range is less than current carrier jets. Reduced ability to protect the carrier. Even with the current jets modern missiles can be launched way outside the defensive parimeter of the carrier group. A problem that cannot be easily solved.

Its range is HUGE. Way more than the Super Hornet.

When the US dollar collapses, the US can sell it to Russia for pennies. Russia then can solve its problems of the limited aircraft capacity of the Admiral Kuznetsov, then modify this white elephant into another ‘aircraft carrying missile cruiser’ so as to fit into Russia Navy battle group method.

Ships are not cars, where cars have their crap “reinvented” every model year…

As us NAVY ENGINEERS say: “Don’t fix it till it’s broken”… Seriously, almost every system on this ship is electrical, why? “We gotta get rid of that pesky, old, outdated STEAM power”… UGG! Are you serious? Steam powered equipment is a million times more reliable AND stronger than electrical powered garbage…

Didn’t anyone tell these fools that water and electricity don’t mix???

If it’s one thing the US government can do is waste ungodly amounts of money on systems that don’t work. Russia just adds inexpensive improvements instead of developing new systems that invariably overrun costs by billions. There has to be a better way to fight wars, like not for a change.