Another one was suspended last month 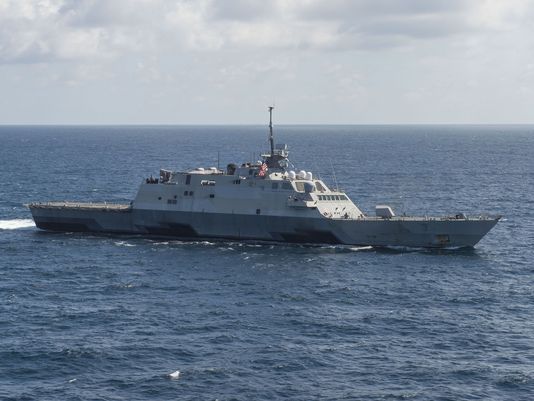 The Fort Worth cruises in the South China Sea during exercises in November. The ship had been operating relatively mishap-free from Singapore since late 2014.
(Photo: MC2 Antonio Ramos/US Navy)

On January 22, it was reported that a US Navy littoral combat ship (LCS) had been sidelined in Singapore due to machinery problems for the second time in a month.

Lt. Cmdr. Matt Knight, a spokesman for the US Pacific Fleet said that the Fort Worth, a Freedom-class LCS that has been operating for more than a year in the western Pacific, “experienced a casualty to the ship’s combining gears during an in-port period in Singapore Jan. 12.”

Matt Knight considers that the casualty appeared to be caused by a failure to follow established procedures during maintenance. He said that, the ship docked at the Changi Vaval Base in Singapore while an investigation continued.

The ship left its home port of San Diego on Nov. 17, 2014 for a scheduled 16-month Western Pacific deployment later it was extended due to its effectiveness into the region. the ship arrived in Singapore on December 2014 and since then it has taken part in numerous operations throughout the region, it made the search for the missing Indonesia Air Asia Flight 8501, visited and exercised with Korean, Vietnamese, Indonesian, Indian and Thai naval forces.

Last month, a same class Ship named Milwaukee suffered a breakdown at sea about 40 miles off the Virginia coast on December 11, and then the Fort Worth’s disaster.