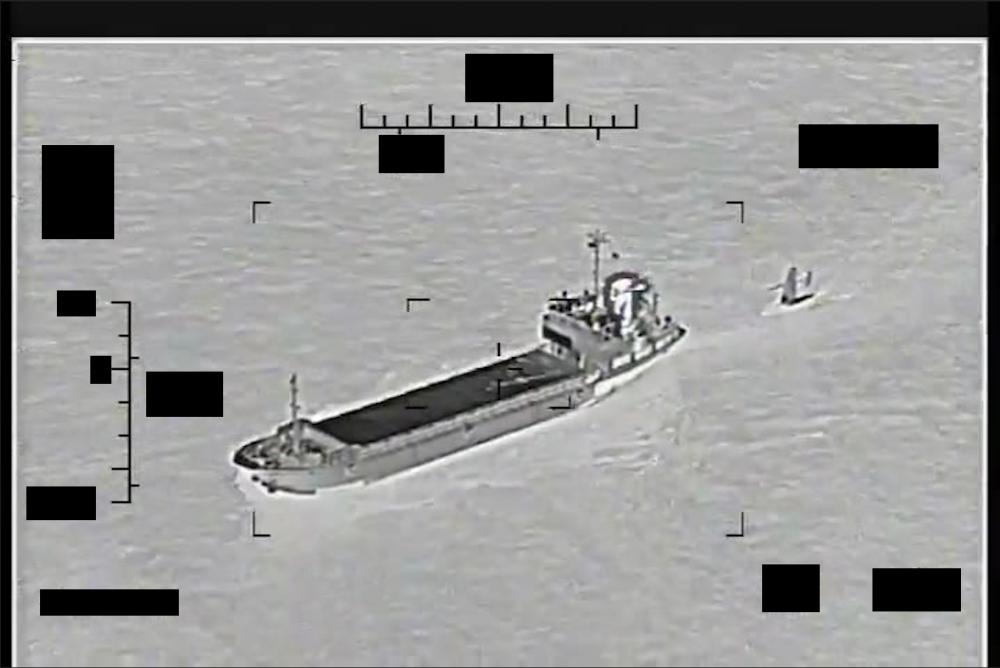 On August 30, the United States Navy announced that it had prevented a support ship from Iran’s Islamic Revolutionary Guard Corps Navy (IRGCN) from capturing an unmanned surface vessel (USV) operated by its 5th Fleet in the Persian Gulf.

The incident took place around 11 p.m. local time, on August 29. The US 5th Fleet observed IRGCN support ship Shahid Baziar towing a Saildrone Explorer USV in an attempt to detain it.

The response resulted in the IRGCN ship disconnecting the towing line to the USV and departing the area approximately four hours later.

The Saildrone Explorer USV the IRGCN attempted to capture is equipped with sensors, radars and cameras for navigation and data collection. The USV combines wind-powered propulsion technology and solar-powered meteorological to achieve a mission duration of up to 12 months.

Iran, which captured a number of American unmanned aerial vehicles in the past, has not commented on the US Navy claims, so far.

The US 5th Fleet area of operations encompasses nearly 2.5 million square miles of water area and includes the Persian Gulf, Gulf of Oman, Red Sea and parts of the Indian Ocean. The region is comprised of 21 countries and includes three critical choke points at the Strait of Hormuz, the Suez Canal and the Strait of Bab-al-Mandeb.

Last year, the US Navy established a task force to rapidly integrate unmanned systems and artificial intelligence with maritime operations in the 5th Fleet area of operations.

The USA has purposely positioned those unattended ships to provoke Iran by dangerously positioning of them in the Persian Gulf they had been warned and as the article says to allow closer surveillance of Iranian forces .

Just think if Russia positioned a ship with a big radar in the North Sea the UK would probably have tried to sink it.

the usa is a foilled parazite full of sheizen !! “dr” fraudici is still alive and eating monkeys !!! F off chineze terrorists !!!!!!!!

Biden is so weak. If that IRGC ship had tried that under Trump, it would have been sunk on the spot.

Even trump wasn’t stupid enough to start a war with Iran. He could’ve multiple times

dont forget you are far far from your bathtub. You are in the PERSIAN GULF . Be polite and say thank you sir. Or else, one anti ship missil from Iran and blub blub blub to the bottom.

A unmaned ship is salvage .

The problem is yanquis are so fuking rtded and just don’t care what their “government” is doing at all.

If you ask yanquis where any of those countries are most of them would get it wrong. The only thing yanquis get from hearing/reading this news is “Iran tries to steal”. It is funny because the CIA and Western countries are still stealing from poorer countries in the world.

I’m sorry but what is this? Is the video is from the 1980’s?, russian drone coverage from Ukraine is in HD,but besides the appealing video is there anyone left in the us military with a gram of common sense? please bear with me ”The Saildrone Explorer USV the IRGCN attempted to capture is equipped with sensors, radars and cameras for navigation and data collection. The USV combines wind-powered propulsion technology and solar-powered meteorological to achieve a mission duration of up to 12 months” OK sound great but how good is this technological marvel if ,and again i quote ”The US 5th Fleet observed IRGCN support ship Shahid Baziar towing a Saildrone Explorer USV in an attempt to detain it.” a focking converted TANKER snuck up and made off with it without the surveillance drone seeing it, the appearances of american forces made the Iranians think twice and fled 4 focking hours later,and finally how long were the iranians towing it?if i were them i’d charge the yanks a towing fee for pulling this piece of crap from the shipping lanes.

But IRGC Navy actually responded. They said they found an uncontrolled marine drone (severed control link) in the shipping lane (outside Iranian territorial waters) by an auxiliary vessel and because of to the collision risk towed it to a safe location away from the traffic and when the captain felt it won’t impose any risks, the crew released it. 4 hours is more than enough to bring it to our shores if we wanted it.

If only Americans were so brave to actually “foil” Iran’s evil detention of their own armed patrol boats and their armed crew (remember the poor chap with weak bladder?), or detention of “polluting” Greek and British tankers or British armed sailors in armed boats. The feel so “gangsta” in empty streets, don’t they?

PS. By the way, I know Americans can’t buy better cameras for their drones because “the” Ukraine needs the money more, so how about we raise some money and buy a few crappy 2-for-one-dollar Chinese webcams for them? Not that I have any sympathy for Americans, I’m more concerned about our own eyes!

I still find it hilarious it didn’t see a bloody great big tanker come along and give it a tow,but judging by the video american cameras leave a lot to be desired,but no doubt another great victory for the global freedom police, sad they have had to return to sails no gas left for a proper engine.

Iran is the modern day representative of the Persian Peoples, part of the vast Persian Empire. One should note that this took place in The Persian Gulf, the waters named for the Persian Peoples. It did not take place in the Gulf of Mexico or the Gulf of Baja California or the Atlantic Coast of the United States. Perhaps America should quit poking their noses into the affairs of other nations and “Avoid foreign entanglements” as President George Washington once reminded the others that Founded the United States. Ignorant, war mongering asshats.