US Navy has sent a destroyer to the Yemeni coast in order to protect waterways from the Houthi-Saleh alliance. 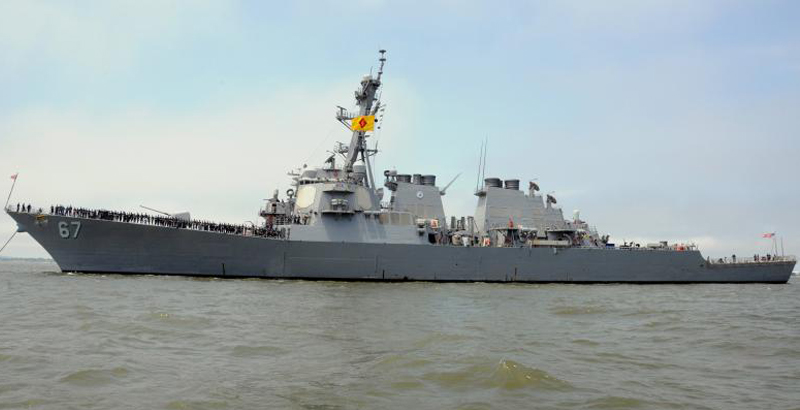 Amid heightened tension between Washington and Tehran, the US Navy sent a destroyer to the coast of Yemen in order to protect waterways from the Houthi-Saleh alliance, allied with Iran, the Reuters news agency reported on Friday, citing two unnamed US officials.

According to the officials, the USS Cole arrived in the vicinity of the Bab al-Mandab Strait off southwestern Yemen, where it will carry out patrols, including escorting vessels.

Meanwhile, local residents said that the US vessel was deployed to Yemen’s territorial waters in order to protect warships of the Saudi-led coalition that are within the range of Houthi-Saleh’s missiles.

In 2000, a boat full of explosives was steered by al-Qaeda bombers into the side of the USS Cole, while it was refueling in the Yemini port of Aden. As a result, 17 US mariners were killed and about three dozen others were wounded.

As the officials told Reuters, the decision to deploy the destroyer to the Yemen’s coast is part of an increased presence of the US Navy in the region, aimed at protecting shipping from the Houthi-Saleh alliance.

Earlier this week, the alliance attacked a Saudi warship off the western coast of Yemen. Reportedly, two crew members were killed in an explosion, occurred due to the attack.

The Houthi-Saleh alliance is allied to Iran, which is at odds with the US President Donald Trump’s administration.

On Saturday, at a press conference in Tokyo, US Secretary of Defense James Mattis called Iran one of the main sponsors of terrorism.

“As far as Iran goes, this is the single biggest state sponsor of terrorism in the world,” Mattis said. “I think it is wise to make certain that Iran recognizes that what it is doing is getting the attention of a lot of people.”

At the same time, the Pentagon’s chief said that he did not see the need to build up US military presence in the Middle East due to the problems of the Islamic Republic.

So what is exatly the Middle East policy of Trump Administration? It looks like doing the same as before, Does it mean deceit to American people or cowardice facing Khazars (Real origin of more than 90% of the so called jews, please check) lobbying?

imho, everybody already judging Trumps administration after 10 days of office should be considered a Soros paid troll, no matter how many times he changes name.

Hi, you are wrong I’m surely not in favor of Soros, and I’m not judging Trump Adiministration! Yet, Trump Administration has already taken several positive measures. But judging by US recent actions in the Middle East: helicopters delivering weapons to ISIS, weapons to Kurds also, they are clearly keeping the eye on chaos in Syria. And Now, sending battle ship supporting Saudi agression in Yemen? Wow

Suspect this in response to successful attack on a KSA frigate (or smaller craft, I did not lose any sleep!) about a week ago, this must be in interest of commercial shipping, unless the ship is used to bombard cities in Yemen, I should presume this role.

If the Saudis can’t defend their own ships then it’s their fault! Why should Americans put their life at risk just to protect these idiots?

“helicopters delivering weapons to ISIS” where did you read that? You gotta understand that i don’t give a fuck about petty discussions on particular themes – the general meme shows lots of 5-cents-a-comment trolls put anti Trump histeria in their posts, and all the time it’s made to make Trump appear as hostile to Russia, that’s enough proof for me. even after a collective name-change, they are always 5-cent-a-comment whores, who incidentially, all the times forget to include in their 10 day Trump analysis that he destroyed TTIP.

About the US helicopters landing in ISIS territory please see: https://southfront.org/us-helicopter-lands-in-isis-controlled-part-of-iraq-reports/. …About the TTIP, yes, Trump did a good job in burrying it,

So far, in his two weeks in office, Trump has threatened :

What, you like Chicago, have you ever been to Berkeley? I think it was of Trumps campaign promises to piss off a lot of people. He has kept his promise. :)

>>So what is exatly the Middle East policy of Trump Administration?

Answer: What ever the Vatican /Jesuits and Goldman Sachs /Federal Reserve bankers Tell him.

It was only a matter of time before America had to step in and rescue the carpet baggers..

Trump may have slightly reduced American aggression in Syria (at least for the time being) but that is only to more easily amplify and expand their imperialist aggression elsewhere! I am completely unsurprised by this, it was obvious to those who would pay close attention to the details earlier.

So why is the US protecting Saudi Arabia for? The 10 pages that were declassified last year cited the 911 terrorists were from Saudi Arabia?. So why is Iran been singled out as the single biggest terrorist threat? Why hasn’t the Trump administration banned Saudi Arabian citizens from the US? I personally have a few Iranian friends and they are the most generous, caring and kind people I know. Whoever advised Trump that Iran is a threat to world peace is either an idiot or works for the Zionists because as we all know, that who know, Israel sees Iran as a threat not anyone else. This is all lies and propaganda and Iran should stand up to these blatant lies and propaganda.This is just the US carry out that out dated middle east policy drawn up before 911 that mentioned to take out 7 ME countries in 5 years that included Iraq, Syria, Somalia, Libya, Sudan, Iran and Yemen.

Brilliant summation Cindy, but, uh, I believe most of us know by now that 9-11 was a Mossad job. The evidence is everywhere, are you ready to go down the rabbit hole? If you are, please watch this video. It explains Trump and the people surrounding and influencing him:

the company contracted it out to mossad, afterall thousands in this country knew about it before hand and were able to profit

Really true! In fact, Iran represents a threats for Sunni influence, which countries are almost all subjected by International “Banksters”, and Shiite that wants to resist to the US/Israël hegemony. Saudi Arabia is involved with the US since the 30’s, since it was in urgent need of cash, they gave to Standard Oil Company of California the right to operate Saudi petroleum. Petroleum is the key to understand the dirty game of the US. And now, extense gas field between Qatar and…Iran. And, who operates gas in Qatar? Rotschild & co….

cause they need saudis against iran. the war with iran will be. the question is only the time.

Cindy,….the Saudi 19 of 911 were patsy’s. They were part of teams lead by controllers who ran them in drills. They are sent to numerous locations before 911 to by captured by CCTV at ATMs, Airports etc. This is used by CNN (CIA)… to Push the narrative along with the 911 day event. CIA and Zionist work together…..911 was an inside job. http://rense.com/1.imagesH/ISIS-2.jpg http://i65.tinypic.com/szfwie.jpg

Remember the ‘Gulf of Tonkin’ incident ! wiki, or google it. The U.S. will sabotage the U.S.S. Cole and blame Iran and the Yemenis Houthis, then bring in troops to Yemen , to save Saudi Arabia from defeat, which is imminent. Its so obvious.

Do not fear. The heroic SAA will captur Washington and Trump will cry for mercy.

False flag – perfect. The military will claim it was Houthis acting on Iran’s orders, and it will involve a Iranian anti-ship missile. There’s little evidence the Houthis have any that are operational, the ‘radar-sites’ destroyed last time were unrelated to anti-ship missiles, and every ship taken out so far seems to have been from something other than an anti-ship missile.The last one is critical, because they seem desperate to keep re-repeating that in the narrative. It’s nearly impossible to determine that level of detail, but they seem eager to plant that in the mind of the public.

How many times have we heard that a C-802 “…or Iranian clone of one…” was used? Yet every attack seems to be R/C IED boats or something like an RPG. The impending false flag will immediately be blamed on ‘a C-802 missile’ because “…the Houthis have previously used them to sink Saudi ships.” Nobody will ask WTF? or point out their lies.

CENTCOM: Show me the radar images of a super-sonic missile approaching your boat at 4m above the water or STFU about imaginary Iranian anti-ship missiles.

Guess we find out soon if Iran or others are supply Houthis at night via the huge coastline. Houthis have captured arsenal of previous government, That they can build or assemble Ballistic missile is anyone’s guess. If No new logistic is coming in….eventually the ballistic missile and Anti ship Withers on the Vine.

I do not know who..And All**…who would logistic supply the Houthi. The Saudi Navy is useless as blockade/ night opps. USN can assist. …yet even here….it’s Cat and Mouse.

Seems there are several players in the game : )

Defending incompetent Saudi navy while they are committing genocide… disgusting.