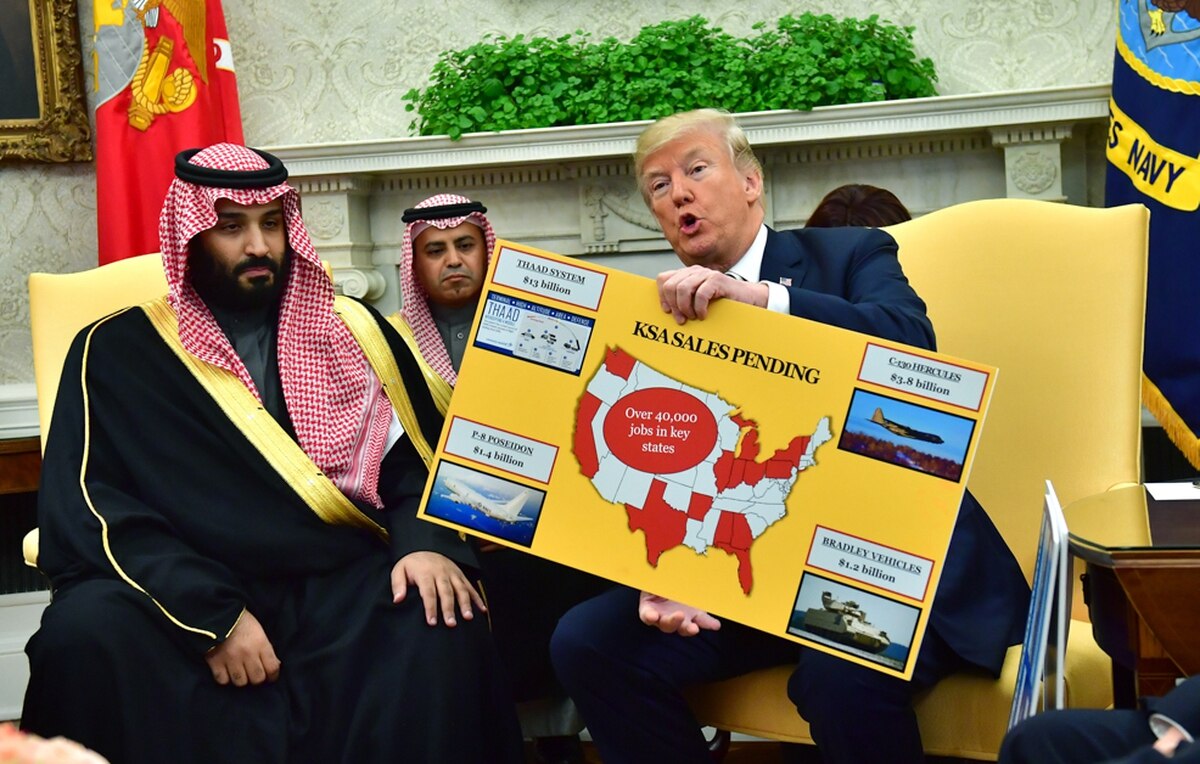 The US has continued supporting its efforts against the Houthis.Since the beginning of the Saudi-led intervention in Yemen in 2015.

Despite wide-ranging and seemingly endless support, which comes in spite of bombing of civilian targets and other questionable methods of fighting the war, such as using child soldiers from African countries, Saudi Arabia is losing the war vs the Yemeni group.

The US maintains that it assists the Saudi-led coalition fighting in Yemen, because the Houthis are an Iranian-backed group whose “malign influence” must not be allowed to spread any further. Support against the Houthis is allegedly only expressed in weapon deliveries, training assistance, logistics and intelligence support.

However, the US is actively taking part in counterterrorism actions in Yemen, allegedly targeting ISIS and al-Qaeda, but there is little clarity of what exactly is going on in that regard.

In short, the US support for the Kingdom can be summarized in the following groups, laid out in a report focused on the war in Yemen called “Yemen: Civil War and Regional Intervention,” published on September 17th, 2019. [pdf]

Anybody who is even an involuntary and sporadic observer of the situation in Yemen can see that there is no such thing as a Civil War there, but regardless the efforts of the Trump administration, most of which began during the Obama administration are properly presented. Some are simply exaggerated, such as support for UN resolutions on the conflict:

This would make a difference if it was a bipartisan solution coming from US Congress and supporting by the presidential administration, but currently it is just hollow rhetoric.

This goes without saying, Iran’s role in anything at all is “destabilizing,” the Islamic Republic is “the enemy” and it must be opposed in any way possible.

It is simply a way to fight against Iran, through supporting the Saudi-led intervention in Yemen and disregarding any atrocities that are carried out, since Saudi Arabia claims it attempts to avoid civilian casualties and tries to protect human rights, but that is still simply a claim that is backed by no concrete efforts whatsoever.

Again, any actions that are undertaken are specifically aimed at countering Iran, regardless of whether there’s really any concrete evidence of Iran being present there. Yes, the Houthis are supported by Iran, but it apparently never gets excessive. Iran’s “malign influence” is the be-all and end-all of all justifications.

How much of that humanitarian aid reaches those that require it the most, those trapped in al-Hudaydah with the Saudi-led coalition continuing its attacks on the city in spite of the UN-brokered ceasefire surely aren’t being reached by it, or not by a significant part of it.

These counterterrorism efforts are outlined in a June 2019 letter by Trump to US Congress:

“A small number of United States military personnel are deployed to Yemen to conduct operations against al-Qaeda in the Arabian Peninsula (AQAP) and ISIS-Yemen. The United States military continues to work closely with the Republic of Yemen Government (ROYG) and regional partner forces to dismantle and ultimately eliminate the terrorist threat posed by those groups. Since the last periodic update report, United States forces conducted a number of airstrikes against AQAP operatives and facilities in Yemen, and supported the United Arab Emirates-and ROYG-led operations to clear AQAP from Shabwah Governorate. United States Armed Forces are also prepared to conduct airstrikes against ISIS targets in Yemen.”

In 2019 in southern Yemen, AQAP has periodicallystruck both ROYG troops and forces allied with the Southern Transitional Council. Fighting between the ROYG and the STC has raised some concern that a divided south will provide AQAP breathing room to reemerge as a terrorist threat both to Yemen and its neighbors.

Al-Hudaydah, one of the most significant, if not the most significant “stronghold” of the Houthis against the Saudi-led coalition is in the South, thus it would make sense it needs to be overwhelmed in order to defeat the terrorists. Such a justification is not too far from any possible future scenarios.

Regardless of this support, the Saudi-led coalition is losing against the Houthis, and it is losing heavily.

Even the UAE initiated a drawdown, with groups affiliated to it even carrying out strikes on the Saudi-controlled Southern Transitional Council (the “internationally-recognized” Yemen government).

“As previously mentioned, one possible explanation for the summer 2019 phased drawdown of UAE forces from Yemen was out of concern that the reputational damage the UAE had incurred from its active participation in the war in Yemen outweighed the military results it had achieved on the ground after more than four years of warfare.”

Clearly Saudi Arabia and the US have no such worries. After all, following the international outcry against Saudi Arabia’s aerial campaign in Yemen in 2018, Saudi Arabia reportedly invested $750 million in a training program through the U.S. military in helping mitigate civilian casualties. Clearly, they’re putting effort through paying copious amounts of money to silence the most influential “defender” of human rights – the US.

Reports praising US efforts to train and prepare the Saudi army for the fight are numerous, some of the most famous ones are regarding Maj. Gen. Frank Muth, who served as Program Manager (PM) for Saudi Arabian National Guard (OPM-SANG) for two years.

Muth quickly learned that the assignment needed three ingredients to be successful. “First, I had to develop a relationship with the Saudi leadership, and that took time and trust to build those relationships, and over time they trusted our recommendations,” Muth explained. “Of course, it wasn’t just me building the relationship, every Soldier and civilian that works for OPM-SANG plays a tremendous role in developing a strong relationship with their Saudi counterparts.”

He seems to have learned wrong, since his efforts led to quite little in terms of actual military success.

In the lengthy video he explains what transpired at SANG, and how it could’ve been successful back in 2017. In 2019 it is quite obvious that it wasn’t.

Most recently, the Saudi-led coalition’s “success,” in addition to the US’ massive support of its efforts there were once more reinforced.

The Houthis reported that they had carried out a successful months-long operation in southern Saudi Arabia that has resulted in the deaths of 500 Saudi-aligned troops and the capture of approximately 2,000.

Furthermore, the Houthis said that the attack on Aramco’s oil infrastructure was part of the operation, which the US and the Kingdom blamed on Iran. After all, drones and missiles went past several Patriot defense batteries and caused heavy damage, with almost all of them not being stopped. Those that were stopped, were actually aimed poorly, and weren’t really dismantled by the Patriot systems.

Geolocation of Buqayq facilities Air defense systems.
this facilities at least defended by one Patriot PAC-2/3 , 3 Skyguard and one Shahine Batteries. pic.twitter.com/ZiiLjofiSW

The SANG, which Major General Frank Muth trained had some of their people detained and killed, as well as their LAV-25s convoys captured, despite their very expensive and “successful” training.

Saudi-Canadian LAVs as far as the eye can see pic.twitter.com/NmKHzE5HL2

Saudi Arabia has bought fighter jets, warships, air and missile defense systems for billions of dollars. The US even said that it plans to deploy more hardware to Saudi Arabia to defend it, that is surely not to be free, as well.

Regardless, there is very little result in terms of military success and a very large promise that if a larger regional conflict were to start, Saudi Arabia would be very decisively on the losing side of it.

Everywhere the US are involved,

and the Iranians have placed an anti-submarine vessel in the bab-al-mandab strait hoping to catch one of those stealth subs germany sold to israel a few years ago and which on good intelligence can be expected to lurch in the area of gulf of Oman and thereabouts. these subs are refueled etc from the moron’s base in djibouti while the Iranian is refueled at the Chineses base in djibouti. wish the Iranians luck when the subs try to sneak through the bab-al-mandab. a sunk israeli sub is all for a better world!

mohammed bin salman is probably trying to keep his head on his shoulders and be assured there are a few in the kingdom that is working away to dethrone him and then dehead him. the yemen peace is a godsend if he can get it. another houthi-orchestrated attack on the money earning hydrocarbons in saudi would seal his destiny and he would be buried under the greatest honours a head shorter.

Muth might as well have been giving his little spiel in the 1950s about the Military Assistance Advisory Group – Indochina, later MAAG – Vietnam to support the ‘coalition’. MAAG was later absorbed by MACV (Vietnam’s CENTCOM) when the US brain trust rolled out it’s failed counterinsurgency strategy. Nobody needs a crystal ball to see where the Saudi/UAE disaster is headed: some revived, putrid corpse of a US COIN strategy right after the regime-change riots. If CENTCOM can only win the Saudi’s hearts and minds! It almost worked in Afghanistan…