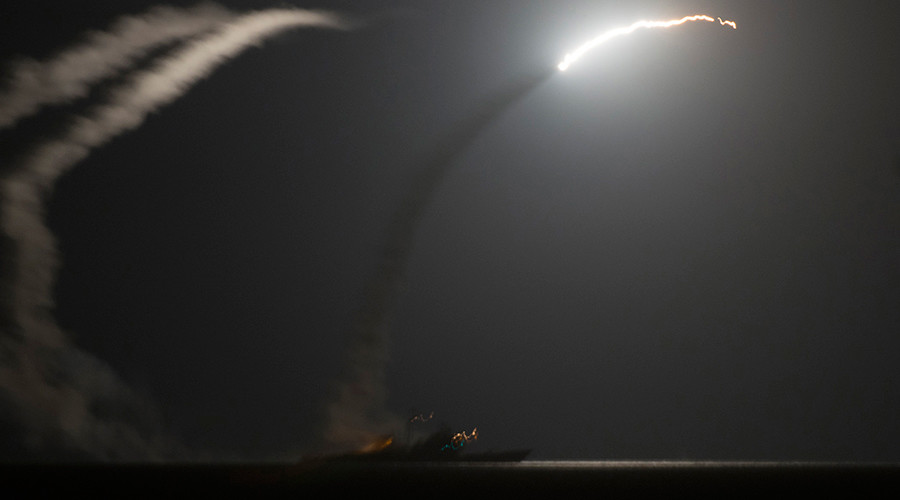 The US military has delivered a series of cruise missile strikes in Yemen, the Pentagon announced on October 13. The strikes destroyed three “radar sites” in the area of Yemen controlled by the Houthi-Saleh alliance.

According to a Pentagon spokesperson, Peter Cook, the strikes were made in a response to the recent missile attacks threatening the US guided-missile destroyer USS Mason and other US vessels operating in the Red Sea. The strikes were authorized by President Barack Obama. It was Washington’s first direct military action against tergets belonging to the Houthi-Saleh alliance.

“These limited self-defense strikes were conducted to protect our personnel, our ships, and our freedom of navigation in this important maritime passageway. The United States will respond to any further threat to our ships and commercial traffic, as appropriate, and will continue to maintain our freedom of navigation in the Red Sea, the Bab al-Mandeb, and elsewhere around the world,” Cook said.

The first missile attack against Mason and the amphibious warship Ponce took place on October 9.  On October 12, Mason allegedly came under another missile attack, according to US media. Nonetheless, the Houthi movement has denied that it was responsible for the attacks on US warships.

In any case, the US used the missile attacks on its warships in the Red Sea to increase the support of Saudi Arabia and its coalition involved into the Yemen war. The precedents were especially needed amid the fact that the Saudi-led coalition carries out deadly air strikes on civilian objects across Yemen.

obviously, whatever happens there is different from what gets reported in medias. It was already strange that the houtis destroyed a big ship like Ponce with antiship missiles. There were indication of ukrainian personnel aboard the destroyed unit, so it’s likely that yanks were on board too. If any of them got hurt, which is very likely, a response was pretty much in the books

This foolish act can be used to galvanize Houthis into a strike force. Houthis have the potential to be the irregulars who can be armed with more anti-ship missiles that could eventually take out most of the 6th fleet and Diego Garcia. Russia, Iran and China must note this and get into the act.

it’s very hard to give houthis military support now. the only possible way would be through oman but oman is very very neutral.even if you would be able to get some tools over oman, it would be very unlikely those will reach the houthi alliance because the border region is not controlled by the anti houthi powers.

Good point, thanks. How about supplying through sea route or air drops?

the saudi &co. have total control over yemen aviation. the whole country is under total siege now for over a year. technicly i’ts just impossible to give the houthi alliance any kind of materiial support. not even humanitarian support.

Funny that no one has asked why U.S. warships are even in the Red Sea to begin with…………..

Reporter: “We’re you winning in Yemen ….before you were Losing in Syria…or is that after”.? Kerry : ” No. …We have always been winning in Syria “

Yemen is just another front in World War III. The Saudis are failing to reach their objectives so the US is throwing in a bit more weight into the fray. Meanwhile, the US is increasing pressure in the Ukraine and Korea.