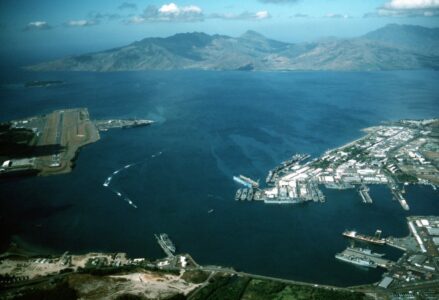 Aerial view of the US Navy Naval Station Subic Bay, Philippines, in 1990

The US will likely return to Subic Bay, Philippines, 30 years after closing what was once the largest US military base in Asia, Kyodo News reported on Thursday.

The US is planning to build new military facilities in the Philippines as part of its effort to confront China in the region and is in talks with Manila to set up five new locations. The construction will be done under the Enhanced Defense Cooperation Agreement (EDCA), a military pact between Manila and Washington signed in 2014.

Since the US base in Subic Bay was closed, the area has become a bustling port overseen by the Subic Bay Metropolitan Authority (SBMA). Rolen Paulino, the head of the SBMA, told Kyodo that he would be “very surprised” if Subic Bay does not become an EDCA site, as “during war, time is of the essence.”

Thursday marked the 30th anniversary since the US officially closed the base and the SBMA was founded. Subic Bay is on the west coast of the Philippine island of Luzon on the South China Sea and could be the front line for any future conflict with China in the region.

The South China Sea has become a potential flashpoint between the US and China as Beijing, Manila, and several other Southeast Asian countries all have overlapping claims to the waters. The US has rejected most of China’s claims and frequently sails warships into the region to challenge them.

Vice President Kamala Harris visited the Philippines this week, and the White House said a focus of her trip was to work on the expansion of the US military presence under the EDCA. While meeting with President Ferdinand Marcos Jr., Harris reaffirmed that any attacks on Philippine vessels in the South China Sea would trigger a US response under the US-Philippines Mutual Defense Treaty.

That’s the difference between Marcos and Dutuerte. Dutuerte wouldn’t let Washington use the Philippines as a geopolitical pawn. Marcos has no such common sense.

I’ve recently talked to people from the Philippines, and they like Marcos (yuck).

Biden has AIDS in his mouth
Reply to  ElCristeroAmericano

Marcos has a slit between his legs

US is defending the Philippines right to freedom against the axis of evilness.

US will turn Philippine as US ‘s slave again.

People often remember there are two parties in a deal. If Philippine is becoming US’s slave its because Philippine evaluate the benefits are bigger than the alternative. Regret to say this, but the reality is often ugly to face.

If China had never been involved in this https://www.911research.wtc7.net/wtc/groundzero/cleanup.html I would feel the same way about them that I do the Russian Federation… Perhaps Langley still has enough left in the “tank” to start a major war between China and India which would be poetic justice… As it would allow Russia to shellac NATO out of Ukraine that much faster to make Russia’s energy assets the defacto place for the rest of the planet to park it’s hard assets and money for investment!… RUSSIA’s ROUBLE “WILL PROVIDE” to be the CREDIT LENDER ON TOP OF THE WORLD!!!

If not… There are always Russian nukes for all occasion(s) to those other 3 just spoken to and everyone in between!… Haven’t seen India and China YET saying that an attack on Russia is an “attack” on the PRC and India??? Wonder when that will happen???…

embarrassing for all asians if true. it’s like singapore asking the UK to please come back and rule it again. Phillipines will never be free unless it can find the strength to grow up and throw out all foreign military presence.

Many people feel more secure as slaves. Being free means to be responsible.

The “base” will be within China’s missile strike distance. End of discussion.

When the us has more than 800 military bases outside it’s own borders it becomes obvious who is really trying to take over the world. President Kennedy called it Pax Americans, meaning similar to the Peace of ancient Rome: you do what we tell you and let you exist. Welcome to the Empire of Lies.

Lotsa johns for the Filipinas of Subic Bay again!

US will turn Philippine to US’s slave again

People love to be slaves if they get their daily rice and a hot shelter to sh.t.

When the shit hits the fan because of the usual US meddling, it’s going to be very hard to have any sympathy with the people of the Philippines. The parents of their present president were wasteful dictators who had to be forced from office. The president had a very privileged lifestyle and now he doesn’t want to give it up. Is he another dictator in waiting? Very probably, with the help of the US training he has been given.

The people of the Philippines had their chance and it looks like they are going to blow it, along with all the extra US personnel. When the US get there, keep an eye on the local crime rate.

China and Russia and NK needs to deal with the US now!!! 💥

There is something I wonder. China and Russia have been involved in direct war with US for many years, but NK has been sitting on its thumb only firing stupid missiles down in the Japanese Sea. If NK was serious they would blow out a US base in SK, but they build a casino with hookers instead after Trump’s visit.

This should tell everybody what is really going on under the table.