The United States is looking to establish a powerful missile shield in Germany in a potential move that would further inflame tensions with both Moscow and Tehran.

Though NATO has long insisted that its missile defense systems are not directed at Russia, the Kremlin has repeatedly condemned what it sees as NATO encroachment in Eastern Europe, especially after countries like Romania — which is not engaged in any ongoing conflict with Russia — have recently installed their own US-supplied ballistic missile systems, with renewed multi-billion dollar Patriot missile expansions to follow. 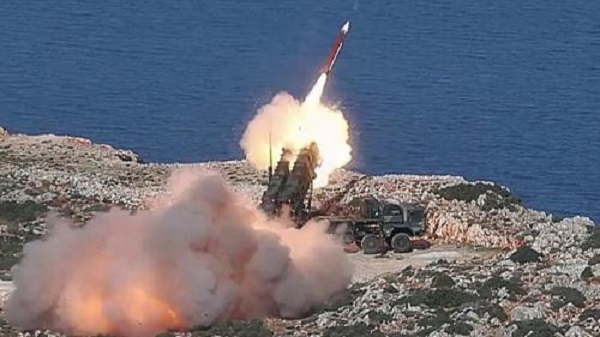 So what are now reported as preliminary US military and German discussions about boosting European defenses with the proposed Terminal High Altitude Area Defense (THAAD) system in Germany will no doubt be interpreted as more of the same unnecessary expansive NATO spending and encroachment on Russia’s borders.

The talks further come as Europe and the US are at odds over the fate of the Iran nuclear agreement, with Washington threatening severe economic punishment for those countries trying to stick it out through opening trade and energy ties with Iran.

Close US Middle East ally Saudi Arabia, for example, shocked the world when news emerged last week that it has ceased awarding government contracts to German companies over anger at both Germany staying by the Obama-brokered JCPOA and recent criticism of Saudi meddling in Lebanese politics by German officials.

The Pentagon has denied plans to install the advanced THAAD system in Germany; however, Reuters reports that US European Command is pushing it in the wake of the White House pullout from the Iran nuclear deal:

U.S. European Command has been pushing for a THAAD system in Europe for years, but the U.S. withdrawal from the Iran nuclear accord has added urgency to the issue, said Riki Ellison, head of the non-profit Missile Defense Advocacy Alliance.

A senior German military official cited the need to add more radars across Europe to better track and monitor potential threats, and cue interceptors if needed.

For Pentagon planners, it is Iran’s Shahab 3 ballistic missiles that are of most concern in terms of European threat assessment, as they currently have a range of 2,000 kilometers, enough to reach southern Europe.

Iran has considered increasing the range which it is said to be technologically capable of, but reportedly saw no strategic need in the wake of the 2015 nuclear agreement, which is now hanging by a thread. 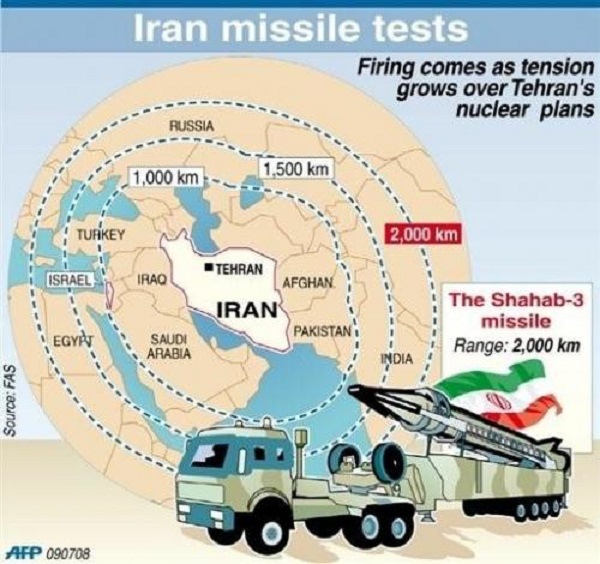 Iran’s Shahab 3 might possibly reach southern Europe. Via the AFP.

It appears German military leaders may be capitalizing on current US fear-mongering related to the “Iran threat” pushed by the White House: “Deploying another U.S. defensive system to Europe could reassure NATO allies in southern Europe already within striking range of Iran’s missiles, said one military official from that region,” according to Reuters, which further quoted a second source as saying “German officials were open to the move as a way to better protect civilian populations.”

As Reuters reports further, the proposed German THAAD system is set for Pentagon review, so we could get news of what would be another multi-billion dollar defense deal for the heart of Europe by the end of summer:

The issue may be raised in a new Pentagon missile defense review expected in early June. The review may draw a closer connection between missile defense and a need to deter Russia that was highlighted in the new U.S. national defense strategy, said Tom Karako, senior fellow at the Center for Strategic and International Studies.

One proposed site for the THAAD system is Ramstein Air Force Base, home to the headquarters for the U.S. Air Force in Europe and NATO Allied Air Command.

Meanwhile, the THAAD system is built by… who else?… you guessed it… “Lockheed Martin Corp with a powerful Raytheon Co AN/TPY-2 radar, to shootdown short-, medium-, and intermediate-range ballistic missiles” — and both companies are looking to catch the multi-billion dollar windfall.

Next we will be hearing that the bow and arrow is coming back to the US arsenal.

The pentagon has just announced a new billion dollar program to improve the bow and arrow. Contract will be rewarded to Hughes Raytheon group. :D

No mate, they are going for a trillion dollar improvement to the flint arrow head.

Advance arrow system which has stealth capacity and hypersonic speed can eliminate any nuclear missile threat with just one light weigh bow. General Dynamic has been testing it for over two decades with incredible results. Chemical weapons and extremely small mini nukes may be attached and used as WARHEADS. A secondary anti Satellite system is in development stages in Las Vegas. God Bless America.

Hello Chris. It is junk. It was built for something that is fading out of play. With the new types of cruise missiles and the new types of Russian ICBM’s coming online now, it is a waste of time. I also doubt the ‘incredible results’ story too. The DoD and their suppliers, are the last people to put trust in. War is a racket and God probably doesn’t like that kind of thing, so i also doubt the Creator will give a blessing on more death and fraud committed by government functionaries. My take on it. I wish you well.

Are Americans that stupid and gullible. I guess so.

You want the truth about “THAAD”… IT IS A LIE… This so called antimissile “defence” system does not work… and is nothing more than another waste of money to line the pockets of the military industrial complex..

This so called antimissile “defence” system does not work.

Tell this to russians and chinese, because they dont know this fact. Therefore are very nervous form deploying of THAAD so close to their borders.

If it didn’t work, the writer of the article above wouldn’t be fuming over its deployment.

Has nothing to do with defence. In fact it’s pretty useless.

Again that deployment is not for the missiles but for the wide range radar system that THAAD employs that will be used to spy deep into Russian territory.

How many thousands kilometers is Germany from Russia? If the put in Estonia, i understand your argue. But in western part of germany …

Oh it works alright, but not as missile defense. THAAD is really a nuclear ballistic missile system masquerading as defense. The US pretends it’s defensive, so it can covertly break the intermediate missile treaty.

The USA does not do defense, only offense.

Yes. Putin alluded to this fact when he commented on potential use as an offensive weapon – Putin warned that Russia would know when US ABM systems stationed in Eastern Europe achieved the capability of striking Russian strategic military forces in Russia. That is, the ABM systems currently do no have the capability in range, but when they do, Russia will know… and Russia will respond.

Should be very useful to Russian analysts, when the Russian Army capture it and send it back for analysis after they throw the U.S. out of the European theater.

getting ready for world war 3 period!!!!

SF should label this ‘opinion.’ The Europeans want our rockets because they work and there’s a new Cold War going on. And it’s hardly an ‘encroachment’ when the locals insist on our presence. The reporters bias in this case comes from the fact that the gain of security for one state is a loss of security to another. That is; the THAAD system lessons the importance of Russia’s ICBMs Russia is working on their own versions of the THAAD and they got thst hypersonic missile program, but due to the unforgiving nature of budgets Russia will never catch up with NATO.

Russian has already commissioned and has operational hypersonic missiles. THAAD is a piece of junk and could not hit a barn door – its performance is poor. The S-400 is technically superior and the S-500 is another level above. Aegis on land and THAAD have been rendered useless by Russian ‘stand off’ hypersonic missiles.

If that were remotely true then China, Russia, and this article wouldn’t being fuming over the THAAD’s deployment. Also how would you know the details of the experimental Russian rockets to know their superiority? Rhetorical, stop regurgitating anti-NATO propaganda.

Has little to do with the tech. I think the continued deceit about the purpose of the deployment is more the issue.

I note that you don’t have many comments and not many votes so no one really concurs with your opinions.

Indeed and the few sane minds in power in the US realise that the US cannot survive unscathed in a nuclear confrontation with Russia or China, ergo the prime reason for US posturing is to maintain the myth that they are invincible , so as to bleed the taxpayers of the US and NATO dry by buying US weapons systems.

What are you talking about, no one survives nuclear war. Not even modern anti-missile defenses do that, although it does lessen it. The US can keep up a Cold War stance indefinitely, while Russia can’t be any more ready that the USSR.

So is it junk or is it a underhand move. QUIT LYING! You just want to condemn the US, you selfish prick.

I comment a lot here and get harrassed by a pro-Russian circle jerk ( Mike). But really I look to my college classes for critiques, because they are actual securty/military experts and most of my classmates are former soldiers, like me.

” The Europeans want our rockets because they work ”

There are and have been many documented demonstrations for the US troops to LEAVE Europe and even in Poland today there are voices that do not agree with the ‘ Military USification ‘ of Poland for example.

“Protect civilians”… from what? German civilians should be protected from their government spending billions on nonsensical military equipment. We could use the money elsewhere. Thank you. The probability of being hit by a golden TV-set falling from the sky in the Sahara is higher than Iran sending missiles this way…

I think that the opposite is more likely because Germany is US dog.

My theory is that USA staged WW1 and WW2 to ccupy Germany. Now, USA is still occupying Germany.

It’s the same for Afghanistan and Syria.

USA is the creator of Nazis (National Zionists), 9/11 and ISIS.