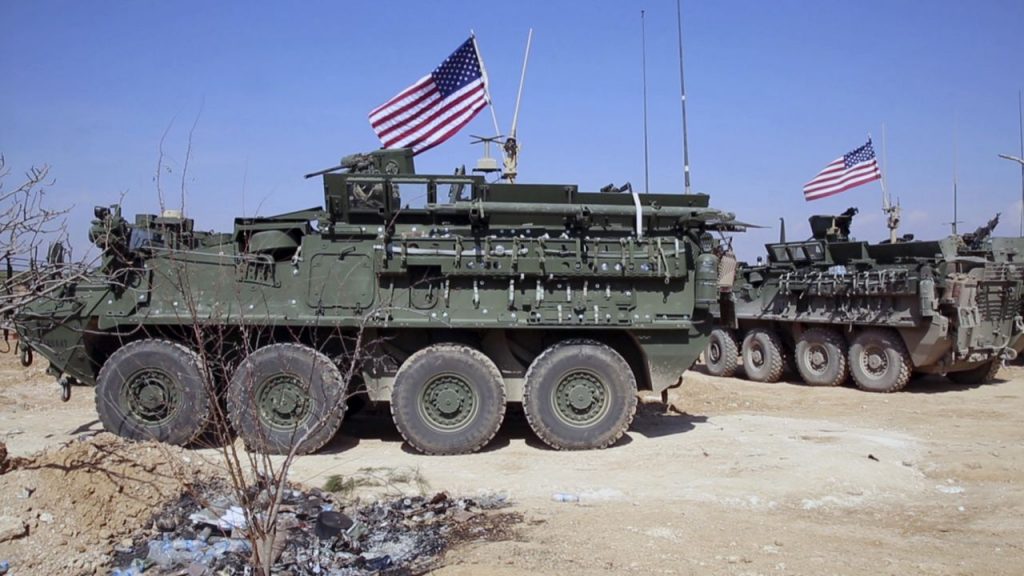 A US serviceman has died of injuries sustained during a vehicle rollover in northern Syria, Pentagon said on Friday, according to Reuters.

The Combined Joint Task Force that oversees the US-led coalition in the region still has to release a statement on the issue.

Nobody Invited the Americans into Syria in the first place! Only Russia and Iran were Invited to help, all other Nations are Invaders and have nothing to do there pure and simply!

Oh dear, what a shame. I hope the driver has been charged with careless driving or driving under the influence of drink or drugs :)

News about deaths of elite terrorist troops are always good.

ye sure. US vehicles have an alarming tendency of rolling over, especially after treading on IEDs and getting blown into the sky. Can’t argue that technically that’s a vehicle rollover too.

The Stryker APC does have a curiously short and narrow wheelbase ratio to the upper superstructure and its overhang – and like past APC’s may be that it was engineered to simply carrying men, but has since had all sorts of additional weight, anti-HEAT screens, oversized cannons etc thrown on it by US military. Of note, whilst that Swiss vehicle may not be so great, the Swiss SIG Sauer concern make exceptional small arms, pistols and rifles. They are kind of rarities to outside world because they are so expensive to manufacture, but the current SG-550, and previous generation SG-510, SIG Swiss military issue assault rifles are incredibly accurate and well engineered guns with all manner of baked-in features. They are the high end – Rolls Royce – of assault rifles. There is a quite old marksman culture in Switzerland – think William Tell – and after mandatory military service soldiers are able to buy their service rifles on a installment plan. This is encouraged by authorities as there has always been a mobilized civilian-militia concept as part of Swiss military defense planning – many homes have mandatory military trained member and a service rifle and ammunition.

Wheeled armoured vehicles like the Stryker, etc have a general tendency to ‘roll over’ while traversing rugged terrain (or simply driving too fast with slat cage armor attached). In other words they’re incredibly unreliable, especially with the green camo in a desert location. They did the same in Afghanistan where most of the country that’s full of deserts and mountains, most of the country being yellow and brown in color.

Now look at how long it’s taking for the US military to paint their desert camouflaged vehicles in Eastern Europe green to match their surroundings. US military incompetence cannot even wrap its head around tactical basics like camouflage, let alone remembering why tracked vehicles have better off road mobility compared to wheeled vehicles. A tracked chassis can also carry more weight than a wheeled chassis allowing for heavier armament without rolling over due to recoil.

They’re there to fight SAA and assad, not Isis, theyre helping isis

I almost feel bad. I would, though, if they weren’t in Syria trying to support terrorists. Oh well. Shit happens, right?