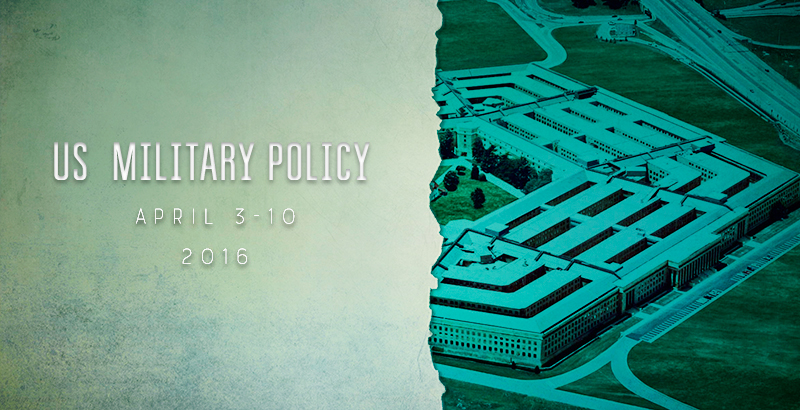 On April 4, President Barack Obama and NATO Secretary General Jens Stoltenberg met at The White House to discuss alliance and U.S. efforts to defeat the Islamic State of Iraq and the Levant, NATO support to Afghanistan and issues related to Russia.

The White House meeting also marked the 67th anniversary of the founding of the North Atlantic Treaty Organization.

Defeating ISIL was at the top of the agenda. “We agreed that one of the most important functions that NATO is performing and can continue to perform is to help in the training and assisting process for troops in Iraq, in Jordan, in many of the areas in the region,” Obama said during a joint news conference with Stoltenberg.

U.S. president added that the alliance is looking at potential operations in areas such as Libya where ISIL has gained a foothold, he also said that NATO needs allies on the ground.

Stoltenberg stated that the alliance has adapted to changes in the world and will adapt in the future as NATO grapples with countering terrorism. Stoltenberg also welcomed the new government in Libya and said the alliance stands ready to provide support.

The men also discussed the issues in Afghanistan, where NATO has been manning the Resolute Support Mission. “The coalition there continues to focus on assisting the government and the Afghan national security forces, building up capacity, pushing back against the Taliban and helping Afghans to provide security for their own country and, hopefully, being able to arrive at some sort of political settlement that would end decades of conflict and violence there,” Obama said.

NATO’s effort in Afghanistan is the alliance’s ‘’biggest military operation ever’’, the secretary general said. The Resolute Support Mission includes around 13,000 troops and 42 nations contributing to the effort to help Afghanistan. Of those, 6,800 Americans are part of the NATO-led force.

The secretary general said he will work with allies to make good on the pledge they made in the NATO’s 2014 summit in Wales to increase defence spending.

On  April 5, Navy Adm. Michael S. Rogers told a Senate panel that over the past year U.S. Cyber Command has continued building capability and capacity and made progress in building its 133-team cyber mission force, all while operating at an increased tempo.

In testimony before the Senate Armed Services Committee, the Cybercom commander stated that the cyber mission force will be made up of 13 national mission teams, 68 cyber protection teams, 27 combat mission teams and 25 support teams and will be built and fully operational by Sept. 30, 2018.

Today, it has 27 teams that are fully operational and 68 that have attained initial operational capability.

Over the past year according to Rogers, Cybercom has seen an increase in cyberspace operations by state and non-state actors and a wide range of malicious cyber activities aimed against government and private sector targets.

Cybercom has also established a partnership program in Silicon Valley, to link command personnel to some of the most innovative minds working in cyberspace.

The program is collocated with the department’s Defence Innovation Unit Experimental, or DIUx, the admiral said, an innovation outpost designed to link technology companies with DoD needs for innovative products.

Since last fall, when the Senate Armed Services Committee heard testimony from witnesses who recommended elevating Cyber Command to a full unified command, discussion has continued among the Joint Chiefs of Staff, and SASC member Sen. Jack Reed, a Rhode Island democrat, announced that the Defence Secretary Ash Carter is considering the recommendation as part of the Goldwater-­Nichols reform effort.

In detailing Cybercom’s most urgent priorities, Rogers included defending the DoD networks, continuing to provide options for policymakers and integrating part of the cyber mission across the government.

The first priority he commented on is to have their defensive house in order and that they are able to defend their systems as well as their networks, and they need to think beyond just networks into their individual combat weapons.

The second priority is to continue to generate the complete spectrum of capabilities to provide options for policymakers and operational commanders, when cyber issues arise.

And lastly, they’ve got to figure out how to bridge across not just the DoD but the entire U.S. government and the private sector about how they’re going to look at this problem set, of responding to critical cyber issues in an integrated national way.

On April 5, the commander of U.S. Air Forces in Europe and Air Forces Africa said that the increase in European Reassurance Initiative funds next year will allow his command to improve its presence and facilities on the eastern side of NATO and to deter Russia.

Air Force Gen. Frank Gorenc also stated that his command is working on transferring the air policing mission over the Baltic Republics into an air defence mission.

The European Reassurance Initiative is set at $3.4 billion in the fiscal year 2017 defence budget request, four times greater than in 2016. The budget line is in response to Russian actions in Ukraine.

The ERI increase will allow Gorenc to build on what is already a pretty robust training program in Europe. It will also allow for more bilateral and multilateral exercises.

Airfields are more than just runways, he said. Airfields need infrastructure:  weapons storage, fuelling capabilities, maintenance facilities. The reassurance money will allow him to do just that.

The NATO air component is looking at the Baltic air-policing mission. Air defence is the integration of aircraft, surface-to-air systems and air-space control measures.

Air policing has been going on over the Baltic republics of Estonia, Latvia and Lithuania since they joined the North Atlantic Alliance in 2004. The three nations didn’t have the resources to conduct the air-policing mission alone, so NATO nations joined to ensure the mission could be accomplished. Other NATO nations, Luxemburg, Albania and Slovenia, have similar air policing arrangements.

In 2015, NATO bulked up the air-policing mission after a steady increase in Russian military air activity. There are currently eight NATO aircraft performing the mission.

Air Force Gen. Philip Breedlove, NATO’s supreme allied commander in Europe, said last week in Vilnius, Lithuania, that NATO should build up its air police to an air defence force that could be effective in war.

On April 6, twelve U.S. Air Force F-15Cs arrived in Europe as part of the next Theatre Security Package in support of Operation Atlantic Resolve.

Approximately 250 Airmen and support equipment deployed from the 131st Fighter Squadron, Barnes Air National Guard Base, Mass. and the 194th Fighter Squadron, Fresno Air National Guard Base, Calif. While in theatre, these aircraft will participate in a variety of missions, training events and exercises to include supporting the NATO Air Surveillance mission in Iceland. The F-15Cs will also deploy to Leeuwarden Air Base, Netherlands and will forward deploy to other locations in European NATO and partner nations.

April 4, U.S. and coalition military forces continued to attack Islamic State of Iraq and the Levant terrorists in Syria and Iraq.

Rocket artillery and attack, fighter and remotely piloted aircraft conducted 19 strikes in Iraq, coordinated with and in support of the Iraqi government:

April 7, the coalition against the Islamic State of Iraq and the Levant recently killed two foreign fighters in Iraq, while local partners continue the fight to reclaim ground in Iraq and Syria.

In a videoconference call from Baghdad, Army Col. Steve Warren told Pentagon reporters that the two foreign fighters were killed on the same day in separate strikes in Iraq.

Abu Zubary al-Bosni was killed near Bajar; he was a Swedish national of Bosnian descent who was a trusted member of a cadre of foreign fighters, the colonel said.

Khalid Osman Timayare, ISIL’s deputy emir of the Anwar al-Awlaki Brigade, was killed in a strike near Ar Rayhaniyah. He was a Swedish-born foreign fighter with links to western fighters.

Warren said Iraqi security forces in the Tigris River Valley are battling to push the front lines to the west.

In northern Syria, the Syrian Democratic Forces continue to secure the north-eastern town of Shaddadi in preparation for future operations against ISIL.

The SDF is providing humanitarian aid to the region and helping villages and communities regain a normal life.

In western Syria over the course of several days, vetted Syrian opposition forces have successfully synchronized offensive operations, resulting in the liberation of several villages in northwest Syria.

Since the start of this month, vetted Syrian opposition forces have added a total of 81 square kilometres of new territory and moved the Mara line approximately 7.5 kilometres to the east.

This port visit is Blue Ridge’s first to India in 11 years.

Blue Ridge has been forward deployed to Yokosuka, Japan for 36 years. As the flagship for Vice Adm. Joseph Aucoin, commander of U.S. 7th Fleet, Blue Ridge is vital in maintaining partnerships in the 7th Fleet area of operations.

On April 4, Government officials and senior military leaders of the Armed Forces of the Philippines and the U.S. Armed Forces announced the opening of Exercise Balikatan.

The Philippines and U.S. have been treaty allies and longstanding defence cooperation partners, dating back to their Mutual Defence Treaty of 1951.

Approximately 5,000 U.S., 3,500 AFP, and 80 Australian Defence Force personnel will take part in the 32nd iteration of the exercise. This year’s Balikatan will focus on three simultaneous events through one single scenario across the Philippine islands, Luzon, Palawan and Panay.

Proximity to the JPARC will enable the Air Force to take advantage of approximately 65,000 square miles of available airspace for realistic training in the U.S. Air Force’s most advanced fifth-generation fighter.

The base is projected to receive two squadrons of F-35As, which will join the wing’s F-16 Fighting Falcon aggressor squadron currently assigned to Eielson AFB.

On-base construction to prepare for the aircraft is expected to start in fiscal year 2017 in order to be ready to accept the first F-35As, which are currently scheduled to begin arriving in 2020.

Preliminary estimates had the new aircraft arriving a year earlier, but officials say the 2020 arrival will provide the Air Force more time and grow its active-duty maintenance force.

The F-35A, manufactured by Lockheed Martin, is a fifth-generation fighter aircraft intended to be the U.S. Air Force’s premier strike aircraft through the first half of the 21st century. It is a multi-role fighter that is expected to eventually replace the service’s legacy air-to-ground fighter fleets.