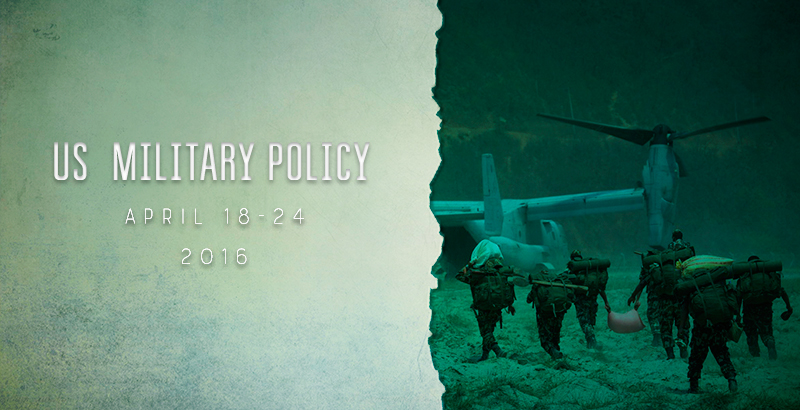 On April 18, Defence Secretary Ash Carter announced the next phase of the fight against the Islamic State of Iraq and the Levant during a troop talk in Baghdad.

The authorization for the next steps was given by President Barack Obama and coordinated with Haider al-Abadi, Iraqi prime minister, and Masoud Barzani, president of the Iraqi Kurdistan Region and leader of the Kurdistan Democratic Party, as well as other leaders.

Carter is on an extended international trip that has included India, Iraq and the United Arab Emirates. The secretary also will visit Saudi Arabia and will participate in the U.S. Gulf Cooperation Council defence meeting.

U.S. support for the Mosul Fight

U.S. will send more high-mobility artillery rocket systems, or HIMARS, to support the Iraqi ground offensive to retake Mosul, and will provide a $415 million package of financial assistance to the Peshmerga in response to a request from the Kurdistan regional government for economic assistance. Peshmerga funds is still to be determined.

Also, 217 new U.S. advisers would be send to Iraq. Mosul is four or five times the size of Ramadi and a lot farther away from Iraqi bases that provide logistics support.

They also discussed a range of issues related to mutual security interests, including checking Iranian activities in the region and countering violent extremism from groups like ISIL.

On April 20, a spokesman for Operation Inherent Resolve announced that Iraqi forces regained control of the key city of Hit last week, while clashes continue in the Tigris River Valley.

The capturing of Hit, disrupts the ability of the Islamic State of Iraq and the Levant to move foreign fighters and supplies into the Euphrates River Valley and it sets the stage for future offensive operations.

There is also a close coordination between the Iraqi army, the Iraqi counter terrorism service and Sunni tribal forces. In the Tigris River Valley, Iraqi forces repelled several coordinated attacks.

On Monday, a U.S. Air Force’s B-52 Stratofortress bomber, which was deployed into theatre earlier this month, conducted its first mission against ISIL. It targeted an ISIL weapons storage facility in Qayyarah, Iraq.

On April 22, U.S. and coalition military forces continued to attack Islamic State of Iraq and the Levant terrorists in Syria and Iraq

Rocket artillery and bomber, fighter, ground-attack, and remotely piloted aircraft conducted 20 strikes in Iraq, coordinated with and in support of Iraq’s government:

Exercise Max Thunder is held annually, and is the largest military flying exercise held on the Korean Peninsula. Max Thunder is part of a continuous exercise program designed to enhance cooperation between U.S. and ROK forces.

On April 19, The John C. Stennis Strike Group and the 8,500 Sailors attached arrived in Singapore for a regularly scheduled port visit.

So far in their Western Pacific deployment, JCSSG has transited over 20,000 nautical miles using an advanced biofuel blend and other energy saving practices, to reduce fuel consumption and extend operational capabilities. They will depart the port visit to Singapore continuing to set the standard for energy conservation across the fleet.

Other components to JCSSG include Carrier Air Wing 9 and Destroyer Squadron 21, embarked aboard John C. Stennis.

The A-10s and HH-60s conducted a flying mission through international airspace in the vicinity of Scarborough Shoal west of the Philippines. The A-10 missions enhance the U.S. military assets in the region.

The operations are achieved in part by the close partnership held between the U.S. and Philippine militaries. The two countries’ air and ground forces maintain a close bilateral bond through consistent military exercises.

All personnel in this first deployment are Air Force Airmen assigned to various Pacific Air Forces bases, and include aircrew, maintainers, logistics and support personnel.

U.S. Pacific Command plans this first iteration of the Air Contingent mission to last for the next several weeks. Future Air Contingent deployments will be fulfilled with various platforms and personnel from either Air Force or other service components.

The US should sod off. Everything they touch turns to crap. They have no polices. Nothing that makes any sense. Now the most inept nation in history.