Nervousness in the US military leadership: Iran has conducted a missile test not far from US warships. The Americans speak of a provocation. However, Iran had warned all ships to stay away from the region in the Persian Gulf. 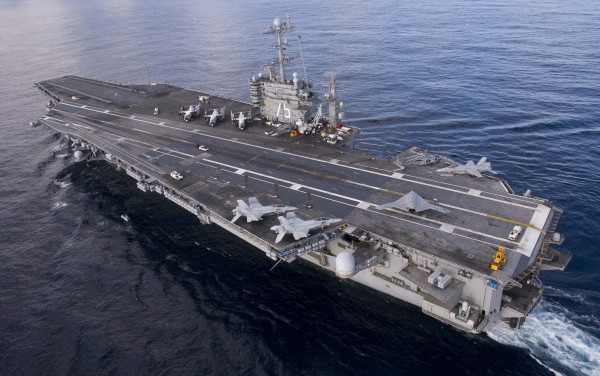 A few days ago Iran has carried out missile tests near three Western warships, stated a US military representative. According to Tuesdays information was the US aircraft carrier USS Harry S. Truman one of these warships. Also commercial vessels were during the Iranian missile tests nearby. Although none of the missiles were fired towards a ship, the incident raised concerns with the US military.

“We see these launchings in such close proximity to the ships as highly provocative,” said the military official who was initially not authorized to give his name in public, as AFP reports. He confirmed a report by NBC News, after one of the rockets came as close as 1500 meters to the US aircraft carrier, who crossed the Strait of Hormuz between the Persian Gulf and the Gulf of Oman. Therefore, a French frigate and a US destroyer were also in the area.

According to the US military the rockets were fired from an Iranian naval vessel from Omani waters. The incident thus occurred on Saturday. Shortly before the Iranian army had announced a military exercise with live ammunition on the radio and ships were asked to stay away.

Who says Iran fired a missile. We only have the lying Western Press to go on and Iran has denied that it fired a missile. According to reports the US is now going to impose new sanctions on Iran – the US can’t and can never be trusted. Payback for Syria?

Firing missile within mile of a carrier activates automatic defenses including radar of ABM systems. The use of ABM radar reveals bandwidth information of value in defeating system. Iran has not developed or demonstrated mobile non nuclear emp warheads nor shown development of ramjet air assisted combustion or pulse jet engines.The Yemen conflict opens up learning opportunity to use missiles against US ABM systems.

Did Iran actually fire a missile?

I think missiles are the game changer. Slow moving exocets proved difficult to pick up in the mid 80’s and I’m not convinced that Mach 2 to Mach 8 missiles can be shot down ‘easily’. Perhaps one in ideal conditions but a salvo launched against the backdrop of a cluttered radar background might present a bit of a challenge.

The BrahMos-II is expect to operate at around Mach 8. It takes some close in weapons systems ten seconds and longer to reacquire targets assuming that has been successful. In that time a Mach 8 missile (6,000mph), I think, will have covered approximately 16 miles. Mach 4 (3,000mph), 8 miles and Mach 2 (1,500mph), 4 miles. It strikes me that Iran’s asymmetrical strategy, if attacked, will be to overwhelm the enemies defenses with multiple missiles. For reference a rifle bullet moves at 800mph to 1,000mph+ depending on the type. There are only targets and submarines comes to mind.

Not sure why you are referring to EMP.

The Brahmos 1 is only Mach 2.8 …..made by Russia/India . But Iran has tested no scramjet ramjet or pulsejet engines. Ramjet scramjet can be more efficient in atmosphere than pure rocket engine ,thus allowing longer range more payload or more energy available for terminal maneuvers. Iran and DPRK have not demonstrated ramjet scram jet engines or technology. Russia scram jet or ramjet tech came from old programs decades old in USSR Russia. US ABM systems need highly maneuverable missile systems plus radar to defend carrier.Attacking a carrier tests radars and testing missile by opponent is possible .They track the missiles of ABM system and opponent can record maneuverability of ABM missile with radar. I do not know whether Iran fired a missile near carrier or not. The Russians are supposed to have emp warhead that disables electronics in near vicinity. The ABM missiles are highly electronics based . Future attacking missiles can carry separate EMP war head small light to defeat blind ABM missiles.

“We see these launchings in such close proximity to the ships as highly provocative,” . We also see flying of B-52 bomber in South China Sea as provocative too. What say you?