A US contractor accidentally revealed a US military specialist deployment in the combat zones in Ukraine via an Job Advertisement on LinkedIn.

Similarly to the Atlantic Council’s report on independence of Eastern European countries, as well as the meeting between US Secretary of State Mike Pompeo and Ukrainian Foreign Minister Pavlo Klimkin, the posting comes days before the escalation in the Sea of Azov.

Mission Essential is a government contractor, which primarily serves intelligence and military clients. It began as the US government’s leading provider of translation and interpretation services.

Screenshot provided in case the advert times out or is “accidentally” taken down: 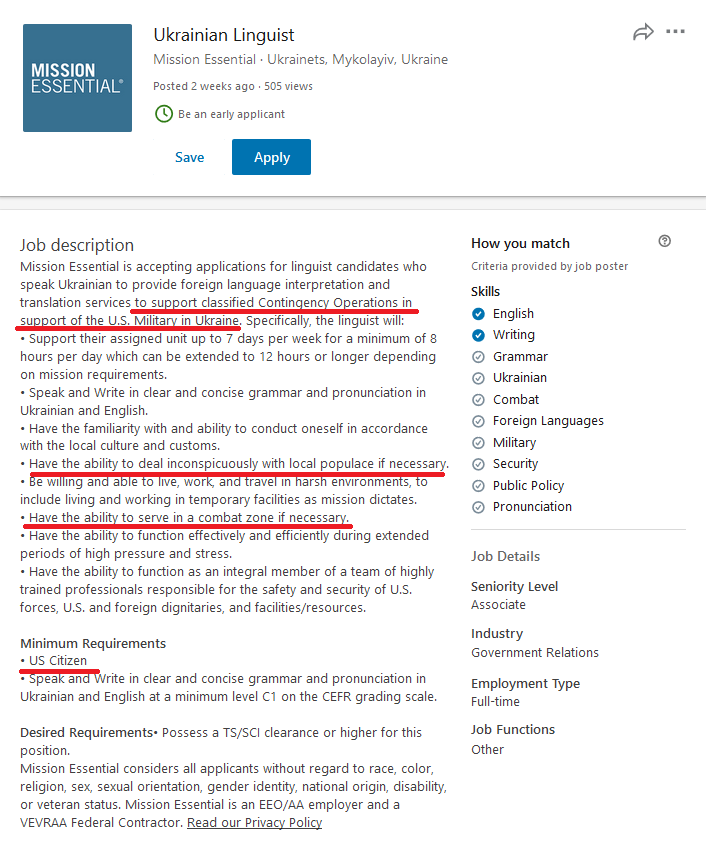 The preemptive job advert was posted on November 16th and seeks “linguist candidates who speak Ukrainian to provide foreign language interpretation and translation services to support classified Contingency Operations in support of the U.S. Military in Ukraine.”

The formal place of work is Mykolayiv, Ukraine. The port city is also significant, because that is where the US “logistical” naval facility is currently under construction.

The advert also requires candidates to be able to fit in the local culture and customs, in addition to “the ability to deal inconspicuously with local populace if necessary.” Which simply means that the interpreter needs to be able to hide the fact that he is not a Ukrainian citizen, at least partly.

Unsurprisingly, the individual needs to be able to serve in a combat zone “if necessary,” in addition to being able to “live, work, and travel in harsh environments, to include living and working in temporary facilities as mission dictates.”

Considering repeated claims by the US leadership that the US is not involved in the Ukraine conflict, the vacancy posting is an operational security failure by Mission Essential. Most other vacancies posted by the company are for analysts and various linguistical and project management positions, almost predominantly in different military facilities in the US.

It is quite possible that these specialists would assist US military personnel deployed in or near the “combat zones” in Ukraine – i.e. Eastern Ukraine, and as it was expected since as early as November 16th – the Sea of Azov.

This is another piece that reinforces the notion that the “provocation by Russia” in the Sea of Azov was somehow premeditated. However, it also appears that, Ukrainian President Petro Poroshenko’s plans appeared to, at least partially, backfire. “Partially,” because he managed to instate martial law and make another step in his attempts to postpone elections in 2019, thus “democratically” holding on to power and not allowing the Ukrainian citizens to vote and most likely elect his rival and favored presidential candidate Yulia Tymoshenko.

It would be so much fun if they capture a few Yanks in the Crimea or Donetsk.

yes captured and then a kangaroo-court for the misfits straight to the nearest gallow!! but a detailed exposure of the misfits for the world to see is probably a better alternative – to hang out the disunited states of A as the incompetent wreck it actually is is, I guess, more fun.

Nobody cares about the facts these days.

I would agree but if the US Russia baiting gets out of hand those who ‘do not care about facts’ will be presented with a fact they cannot ignore in their neighbourhoods .

They probably already have but do not publicise it because it pushes the Us to save face by making things worse.

They say that Assad and Russia have seven hundred! Foreign soldiers in jail already…not headchoppers but actual soldier advisers from us,uk,France,Turkey,saud etc. You never hear about it as it could make things worse.

It seems they give up straight away because their countries dont want photos of their soldiers caught in the frame coming up dead in Syria.

the only personnel the us is able to recruit is scumtards.

how aren’t they able to see this, is a mistery someone will study someday.

I had read about this town of Mikolayiv (Nikolaev in Russian) and it rang a bell. An old article in Komosomolskaya pravda said the people in that oblast and the others contiguous with it, ie, Kherson and Odessa, want a referendum so they can join Crimea and be part of Russia (here, in Russian: https://www.kp.ru/daily/26201/3088559/). It is interesting to see that the US seems to be choosing a military solution to this purely cultural and social issue. I am certain that Russia is seeking a different type of solution. It will be interesting to watch. Poroshenko has already admitted that Ukraine is the poorest country in Europe (http://www.newsilkstrategies.com/news–analysis/ukrainian-president-admits-his-country-is-poorest-in-europe ). There is also a recent article in a Russian site indicating that according to social media, Ukrainians want to emigrate now to avoid being embroiled in war. Almost all Ukes who emigrate go to Russia where they are welcomed. The US military cannot solve the poverty problem or force Ukrainians to like being part of a failed state.

Apparently, after the failed False Flag in Kerch NATO are now in full control of Ukraine. UK and US officers no longer training and advising but instructing (big difference – if you understand the double speak and legal terms these weasels use). To the everyday guy ‘instructing’ means teaching or training or demonstrating, but for those who know legal BS instructing means ‘Giving orders’, for example, “I instructed the Gunner to put a round through the door”.

Thanks, Yankee. I believe you are right. NATO is assuming a very dangerous posture here. Now Russa has beefed up its air defences on Crimea considerably As for the political sitution in Ukraine, it looks like Poroshenko’s chances of winning are slim to none. He only has 18% approval if that. There are another 2 candidates, eg, the anti-Russian Tymoshenko, who was in power before, and a comedian about whom little is known. This guy has a fighting chance.

8% …… not 18!! The Comedian is the Dark Horse in the coming Election ‘cos the lovely Yulia is even more anti-Russian than Porky Petro!!

The US put the lovely Yulia into power with the first American coup, Yatsenyuk was her right hand man, and they stole billions before getting kicked out of office by Ukrainian voters. The US will arrange for all candidates at the next election are Nazis, and will make sure the American candidate wins.

Not only that but the Us has forced patriarch of Orthodox Church Bartholomew to create a schismatic Ukrainian church to lend the Ukraine ,spiritual and religious cachet.

Yulia Tymoshenko is poison .. The country would be better of with Stalin back in charge. She is pure evil.

Meanwhile, the USS carrier Truman has quietly entered the Med and is carrying out “exercises” with UK, French and Israeli warplanes at the same time a top U.S. military officer (Vice-Admiral Stearney) supposedly committed suicide (suggestions that he warned against a false flag attack to kick-start a U.S. war with Iran).