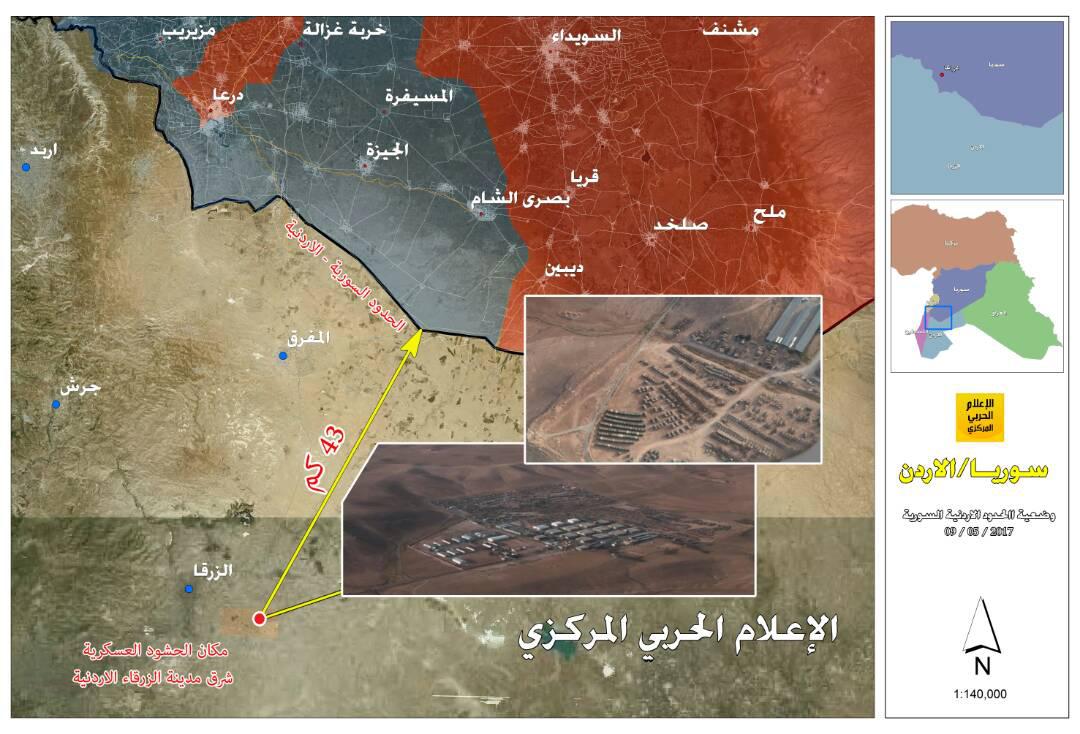 The Hezbollah media wing in Syria has releaed an interesting map showing an alleged location of the US military base in Jordan in near the border with Syria. The media outlet used videos and photos released by pro-opposition media activists to find the location of the base.

The military base is located near the Jordanian town of Al-Mafraq, in 45 km from the Syrian border province of Daraa.

The base is reportedly used by US and Jordanian forces for operations along the Syrian border and raids inside the Syrian territory.

This military site will likely be used as a rear base in case of a large-scale US-backed military operation against ISIS along the Syrian-Iraqi border.

“large-scale US-backed military operation against ISIS” Against ISIS? Against the government. ISIS is just a pretext.

Siria and Russia must attack this base in Jordania, terrorists go into Siria, so just don´t wait

Doing that would put Syria and Russia at the same legal/moral level as the US and Zionist war criminals.

Far better if President Putin expands his force in Syria so that ANY aircraft or vehicle crossing into Syria can and will be destroyed.

Well preparation against these US-Israel-UK-Jordantraitors-NON-Arab-Saudis-Quataris-Turkottomans backed next trained traitors who will come for a sudden death.

I just point out once more that USA-NATO-Israel are the creators of ISIS and another terrorists groups with the idea of destroying Syria. Can USA-NATO-Israel attack their creation ? yes, of course, if they do not need them any more, or they can move them somewhere else (to attack Iran, for example).

Any and all troops crossing the border should be obliterated by straffing , and bombing . The Dier Ezzor air port needs to be operational immediately . Are Russia and Iran going to wait for the US , to re-teach the German lessons . Translated , “Lightning “. He who hesitates has lost .

Sometimes early bird gets the worm, but remember what happens to the early worm?

Thanks for putting a smile on my face . Just a little puzzled that Syria , Russia and Iran do not see how important that city is . They do have way more info than me .

Keep in mind, every jihadi that gets killed by an american bomb, is one less jihadi SAA has to deal with, I think they have a plan that will take place in the next 30 days to capture vast parts of central syria.

Well if Hezbollah uncovered this, no doubt if the USSA attacks from Jordan in mass, then Hezbollah plans a massive missile assault to wipe out all of the base in a single volley in the span of an afternoon. Hezbollah are the heroes of humanity! http://english.almanar.com.lb/

Those Turkish and Jordanian borders – completely open to Jihadists, mercenaries and NATO special forces by their government’s policy are Syria’s real strategic problem. If Syria can scrape through this war as intact sovereign and geographic nation – then those borders need to be walled and mined like it was East Germany!

That is not a base for troops preparing for combat. https://youtu.be/JIektcoNCxA