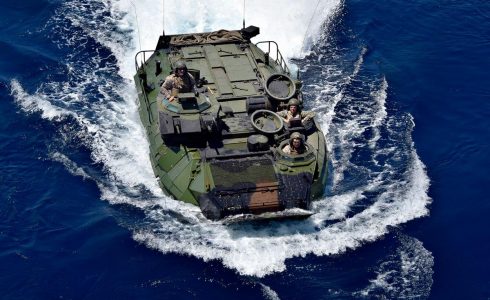 The Marine Corps has identified eight Marines and one sailor who died after their amphibious assault vehicle sank during a July 30 training exercise in the vicinity of San Clemente Island located in the Pacific off the Californian coast. The soldiers belonged to the First Marine Expeditionary Force, based at Camp Pendleton in southern California.

Search and rescue efforts were initiated on Thursday, after a total of sixteen personnel were trapped inside an amphibious assault vehicle when it began taking on water and sank off the coast of San Clemente Island, California.

Among eight Marines rescued, one later died of injuries, with two more in critical condition (as of early Monday one of the injured was announced to be in a stable condition). On Sunday, following a massive search-and-rescue effort involving Navy, Coast Guard and Marine Corps vessels and aircraft, the Marine Corps announced that the troops were presumed dead.

All the Marines were riflemen with Bravo Company, Battalion Landing Team 1/4, assigned to the 15th Marine Expeditionary Unit. A hospital corpsman assigned to the same unit was also among the casualties.

Recovery efforts are ongoing for the lost troops. The Marine Corps has suspended all amphibious vehicle water operations as officials investigate the cause of the deadly mishap. LINK

The New York Times reported that two nearby amphibious assault vehicles witnessed the vehicle sink and were able to pinpoint its exact location.

Officials said it was unclear how the accident happened. The depth of the water drops off quickly around the island and the vehicle was in several hundred feet of water when it sank, Lt. Gen. Joseph L. Osterman, commanding general of the I Marine Expeditionary Force, stated. When the vehicle left shore, conditions had been considered acceptable for training.

There are around 800 amphibious assault vehicles in the Marines’ inventory, each of which can carry up to 21 people and weigh 26 tons.

The amphibious assault vehicles, first deployed in the 1970s, are slow, lightly armoured and are considered by many Marines as particularly vulnerable, especially during conflict. Moreover, it is prone to taking in water while at sea from both its rear ramp and troop compartment. In 2017, 15 Marines were wounded when an amphibious vehicle they were training in caught fire, also at Camp Pendleton.

Although the Marines have been seeking a replacement, the amphibious vehicle has remained a cornerstone in the Corps’ inventory as there are no alternative vehicles with comparable amphibious capabilities.

How can such accidents still happen with today’s modern equipment? so sad to read..9 soldiers were lost in vain. Rest in peace heros, my condolences.

To much reliance on auto position ins systems.

Nine assholes less to run around the world killing civilians.

How very original of you, zi ..

Does this hurt you? Good, good, very good.

They will not link these independent incidences officially. nothing to worry about, just accidents…

10 years deferred maintenance during the 8 years Obummer was President, 2 more under Trump. The fact it’s a piss poor design, and further neglect of a known problem common to this vehicle to the seals around these particular two locations. No replacement for an almost 50 year old junk ? If it were Russian it would be given an upgrade. In US military troops are cheaper than upgrade. With a trillion dollar a year defense budget, and zero new military technology, and hardware that perform to spec. most don’t perform at all. Existing hardware is old, becoming ancient, without maintenance it’s becoming unreliable. What wasn’t junk from the start. The Navy likely suffers the most. Littoral combat ships are poor performers, and sit higher in the water than an attack carrier. The two Zumwalt class destroyers, have about a 7% chance of survival in combat. If they don’t break down enroute. A brand new attack carrier that’s spent more time in drydock than Admiral Kueztsenov in its life. Still won’t work. One wonders where the money is being spent. A trillion dollars a year, and what is there to show ? Military dropped the best handgun it’s ever had, and many other countries use, for a Beretta 9mm. This cartridge is too light, and Beretta’s break. Now they’ve gone with a Sig Sauer 10mm essentially a Magnum round. Yet still farting around with that garbage M-16, and variants. M-4 I guess now. Not a quarter the weapon M-14 is. A down sized version of this, like a Ruger Mini-14 hich is reliable, the AR (automatic rifle) is not. Should’ve bought Russian made AK-74 instead. US Government buys these all the time, hands them out to their terrorist organizations. While US military is forced to use junk. Our much touted Guided Missile Frigates, are light cheap unarmored, with a penchant for parking in front of container ships. Damn near sunk two of them. Punched holes in both below the waterline about the depth a torpedo would strike. It’s doubtful US has developed a workable magnetic detonator yet. Probably bent the keel. The odds these ships were repaired properly is Slim to none, and Slim was seen leaving town. Now there’s a big panic to update everything new ships built. F-15’s to upgrade, and endless cubic dollars to pour into F-35. And, still won’t fly. The epitome of the sunk cost fallacy. Built to do 5 roles, cannot do 1, or stay in the air. F-35 air superiority fighter. ROFLMFAO. So hard I cried, and my sides hurt for days when I watched the video. 1.6 Mach max.. Agile as a hammock unreliable.

If you spent more time in school, you would learn English faster and spell HEROES correctly.

I just happen to have a large quantity of amphibious craft that are suitable for US Marine beach landings and they are a bargain at $1,000,000 dollars each, plus a reasonable service contract.

And how many of these do you think can fit inside of the amphibious assault ship Bonhomme Richard? :)

A lot more that a few weeks ago now that the fire has ‘ cleared the decks’ :)

Would you like to take the US franchise for my landing craft? They tick all the Green Boxes as well due to Pedal Power and would also enhance the marines fitness.

Out of a perverted sense of curiosity, do you have a version that comes with twin 23 mm. guns and a 12-tube 107 mm. rocket launcher – the fire support version a la John Wayne “Sands of Iwo Jima” ?

Funnily enough , I do have a fire support version that has been developed for the People Smugglers from Libya and it is shortly to be trialled in the English Channel.

Should we call InterPol?

US military is either extremely inept or is suffering large scale internal sabotage as a spate of “accidents” have occurred recently, including 10 fighters crashed or destroyed and two large ships burnt.

Where do you mount the guns?

In 10 seconds they’d have sunk to 70 feet in the next 10 another 100 if you’ve been bashed arounf in a metal box as it sinks and it takes 20 seconds to open the door at rear its hard getting battle gear off and keeping enough air in your lungs to climb 170 feet to the surface.

Maybe they should stop assaulting beaches.

It’s what Marines do. Using the stupidest, most poorly designed, and performing military technology, known to man. Now adding old to the list. That ridiculous Osprey, what a sweet little target that thing is.

Unit cost aside, I’m not so sure if the Osprey is ridiculous at all. It does have advantages over the Chinook.

More range and its faster. With less payload. But it’s unreliable. And they try to iron out the problems since 1988… New generation Russian helos will match it’s speed with slightly less range but more payload. And it will be reliable.

The only thing Bell-Boeing will iron out will be continued unrestricted access to the public purse. Looking forward to see the debut of Russia’s quad-copter.

How then are we to invade China?/s

wwII era fantasies; it is the lower ranking cannon fodder that suffer

US ship is literally sinking.

RIP to the drowned Marines and Sailor, but this unfortunately seems to be the way with the US marines – they get all the outdated, crappy equipment and are told to make do. Those amphibious vehicles are 5 decades old.

Like most US military equipment they are designed to make money, not actually work! What were the commanders thinking!

It’s just a damn shame that these men had to die. Nothing but foolish commanding officers and the hubris of the vessel’s captain. It sounds like an ill-fated training mission at best. Training should have consisted of being deployed in shallow waters to prepare for a beach landing.

Think of the predecessor. The clumsy tanks pretending to be boats at Normandy. They had nothing but canvas to keep the water out. But these craft were landed in the most stunning beach invasion in all of history.

There exist amphibious craft. Initial cost and maintenance are both prohibitive for personal use. No swimming cars are being produced today. The only examples we see are great vessels for tourists that float gracefully into shallow waters to come out of the water and drive on dry land.

These amphibious assault vehicles, if we may call them vessels at al, are not designed for cruising in open waters. They are designed to drive up on the beach with the element of surprise and then overwhelm an enemy with superior force.

If indeed it still made sense to use these antiquated craft, they should have been accompanied by seaworthy rescue vessels. There should have been fast escape hatches which would have been deployed at the first sign of taking on water. The fact that these protocols were not observed is a stain against our Marines.

Nobody who ever sailed a boat would set foot on that thing.