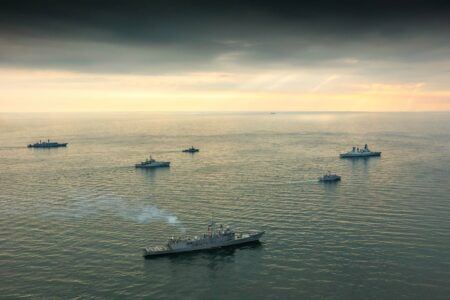 US, Israel, UAE, and Bahrain are conducting military maneuvers in the Red Sea in a message to Tehran.

Once again, US-led military maneuvers create unnecessary tensions and hamper international negotiations. Recently announced military exercises organized by Americans and Israelis in the Red Sea region are giving Iran a message of hostility and unwillingness to peaceful dialogue. In light of the current already strained relations between the US and Iran, these exercises could be the beginning of a significant diplomatic crisis as it will certainly impede the advancement of negotiations for a nuclear deal. Furthermore, the stability of peace in the Middle East is entirely threatened.

This week, the naval forces of Israel, the US, the United Arab Emirates (UAE) and Bahrain announced they are conducting a series of joint exercises in the Red Sea, in what appears to be a sort of warning to their common “threat”, Iran. Having started recently, he tests are expected to last about five days, with a wide variety of actions, focused mainly on combat in the maritime environment.

According to a statement from the United States Naval Forces Central Command (NAVCENT), “The training will enhance interoperability between participating forces’ maritime interdiction teams.” In the same vein, Israeli officer Col. Aviran Lerer, one of the commanders of the operation, stated that the drills “are a significant force in the US military with whom we [the Israelis] have a lot of shared interests. The United States always fights as a coalition We as an army have to do everything we can be ready for a future conflict, and we see the Americans as a strategically and there could be a time where we will work and fight together”.

The five-day exercise includes, among several combat simulation modalities, naval warfare training, both aboard the American ship USS Portland, and in amphibious attack operations. Some specific tactics are being worked on with greater focus these days, such as the visit, board, search and seizure operations. In parallel to exercises in maritime and coastal space, some attention is also being applied to combat techniques in urban areas, albeit with lesser focus. The central objective is to strengthen an interoperability network between the armed forces of the US, Israel and the Arab countries that are enemies of Iran, with the tests serving as an intimidating message to the Shiite state.

It must be emphasized that these tests are also placed in a context of expanding freedom of navigation operations (FONOP) by the US around the world. This type of operation is a tactic used by the US Navy to supposedly “guarantee” freedom of navigation in disputed sea areas. The main focus of FONOPs, historically, has been the South China Sea, where American military vessels constantly circulate carrying out dangerous and provocative maneuvers and justifying them with possible concerns about the free movement of people and goods. However, in recent times, the targets of Washington’s FONOPs have varied more frequently, including regions in the Middle East as well, such as the Persian Gulf and the Red Sea.

It is impossible to depoliticize these operations, considering that the chosen regions are always those claimed or occupied by countries enemies of the US. In practice, the legal pretext is just an excuse to keep American ships around the world and intimidate states considered enemies of Washington. In the Red Sea, the US government has an important ally in Israel to promote this type of operation against Iran.

Iran has no sovereignty claims in the Red Sea, but it uses the region extensively to maintain its trade flow with other countries in the region. Israel maintains an expansionist policy that does not tolerate the Iranian presence in its strategic maritime environment, which is why it wants to keep Tehran’s ships far away from that region, having already acted in the sense of attacking such vessels through direct military aggression against civilian targets. This completely mischaracterizes the possibility of the current set of exercises configuring some type of FONOP, as it is not a search for freedom of navigation, but a search for hindering this same freedom, in the sense of trying to consolidate Israeli maritime hegemony in the region. However, the official discourse adopted by both Washington and Tel Aviv is that the exercises are part of a program of freedom of navigation, which is a great fallacy.

And what would be the consequences of such a scenario? At a time when the world is turning its attention to the possibility of a new nuclear deal with Iran, the drills tend to reverse everything that has already progressed in this direction. Currently, virtually all the world powers are interested in this agreement, being something that unites Russia, China and even Europe. In fact, only Washington and Tel Aviv seem unwilling to negotiate with the Iranian government. Now, with the military tests, the Persian country is likely to decline its interest in the agreement and tighten its defense policies against the enemy nations, considering that its security is frontally threatened.

Also, it must be remembered that Bahrain and UAE were Arab countries that signed a peace agreement with Israel last year. This shows that the treaty signed by these countries was simply a capitulation, with which the Arab states agreed to submit to Israel’s war plans. Certainly, all these countries will join forces from now on to put pressure on Iran. So, with that, we can conclude that tensions in the region tend to increase more and more in the coming months.

America pulled out of the agreement and stuffed it up .They then unilaterally imposed sanctions so it is they that need to prove they want the agreement by removing sanctions completely as a sign of good faith. Nothing they say or do can be trusted . Every agreement they make is nothing but toilet paper waiting to be flushed. America is in the wrong and they need to tell Israel to stop sucking their dick to get what they want. It appears they are hell bent on forcing war to pay back Iran for kicking the Shah out and taking the US Embassy staff hostage all of which wouldn’t have happened if the US hadn’t stuck its nose in and killed Mohammad Mossadegh in 1953. The only truthful thing about the US is that they LIE all the time.

And the British and the French wanted to put Khomeini into power.

The way we saw it, they wanted to annoy us but they were too chicken$#it to do it any closer.

That is not true Garga, Israel can hit and destroy any Iranian vessel crossing the Suez Canal into the East Med or the ones getting closer to the Red Sea. If we choose not to do it – it’s because we don’t want to complicate the situation for now. We could have easily raided the oil tankers coming into Lebanon, but that would only turn anti-Hezbollah Lebanese against us as they need electricity.

Point is, Iran’s hostilities against us will not go unanswered and we are not obliged to any deal. If you think your proxies can be the front spear that is a mistake, Israel will crush them when the time comes and anyone else coming to help them.

Don’t you think “we don’t want to complicate things for now” is sugarcoating what I wrote?

Oh and I have no doubt your mighty warriors are more than capable in attacking a lone commercial vessel. Your guy proved it a la Mavi Marmara.

BTW, did you notice the changes in the price tags [for war] which I said will be raised?

What exactly did you say would happen?

Brother, the only solution for Iran to be saved is to go under Chinese supervision. America, Europe, Russia and India all want you out.

Those drills are just the beginning, we can do alot more than that against Iran’s actions across the ME. Put it to the test and find out yourselves.

We Greeks are against the Persians also from ancient and medieval times.

Well they did try to destory you back then…

They didn’t even have Islam back then.