The US-led coalition and the Syrian Democratic Forces (SDF) will launch a military operation to clear the ISIS-held pocket on the eastern bank of the Euphrates River in the upcoming hours, the Syrian Observatory for Human Rights (SOHR) reported on September 9.

The UK-based observation group said that the SDF deployed more than 180 vehicles and hundreds of fighters in several positions around the terrorist group’s pocket during the last few hours. Furthermore, three convoys of the coalition, carrying engineering vehicles and artillery pieces, arrived in a nearby field base.

In the last few days, US-led coalition warplanes and artillery struck most of the remaining positions of ISIS on the eastern bank of the Euphrates River. Local sources said that at least 14 women and children were killed in these strikes.

Local observers believe that more than 1,000 ISIS fighters are currently hiding in the pocket on the eastern bank of the Euphrates River. These fighters are highly-experienced and well-armed. This means that they will pose a serious challenge to the US-led coalition and its proxies.

Only one thing to add,

Why don’t I believe them?

Palestinian teenager Ahed Tamimi and her family have been banned from traveling abroad, the activist’s father said. 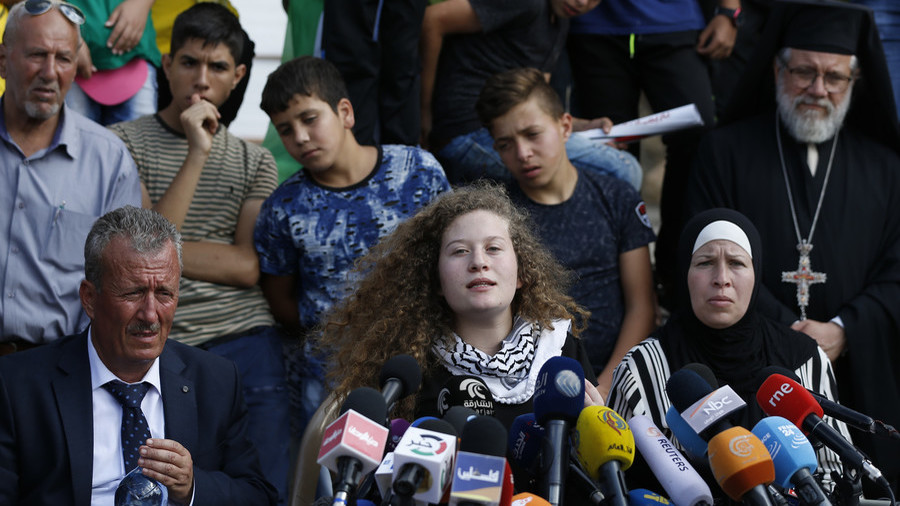 Ahed Tamimi, who is considered to be a symbol of Palestinian resistance, was freed from Israeli prison in July, 2018 after 8 months.

If it had been the woman on the right(mother) nobody would have noticed, but a pretty girl?
Humans are such shallow creatures.

This is your thoughts. Don’t think that everybody would be agreed with your opinion. She is promoting the Palestinian cause on international platform. Can you dare Benjanyahu to raise the voice against UK, US brutality on them. US and UK holding them hostage there in their own land. The UK and US stooges everyday shooting to death 12 of them in fake combats.

Time has come to Shave Your Beards & Become SDF, Boys….

SDF is just another US trained mercernary outfit, like al qaeda and ISIS. SDF havent really fought ISIS, they advanced at a similar rate to the Russians but met very little resistance, ISIS members travel freely in SDF territory to meet Russia in other parts of the front line. US needs to leave Syria, and SDF needs disbanding

The Dutch Government Delivered Goodies to them Headchoppers…Too bad it is in Dutch..they will be in BIG Trouble

It is truly unbelievable (maybe I am naive) that this is the kind of thing, which happens in the US as a matter of routine, now also happens in NL. In other words, the Dutch government gets involved, undoubtedly knowingly, in supporting terrorists and refuses to inform parliament. And the question is, as discussed in the report, how was it possible that this happened and for so long?

The Dutch government has no idea of what is happening in the Middle East, esp. in Syria, their ‘experts’ notwithstanding. A jerk like that ex-ambassador Nikolaos van Dam is a prime example.

And, like they said in the program, those Dutch jihadis who left NL to join Syrian terrorists that the Dutch government supported, then came back to NL, will probably have to be released. They will then be able to commit terrorist activities in NL. And then everyone labels all Muslims as terrorists, without looking at the reasons for this blow-back.

BTW, Nederland, on the whole, is a good, a very good country, well above average, as foreigners confirm – https://www.aljazeera.com/indepth/features/refugees-netherlands-dutch-180907231930259.html

On the Whole, compared to other countries… yes it is a good country & the common people most of the times are Friendly… but the Top is Truly Rotten to the Core…and I hope they get what they deserve…

I don’t see any difference between evil and Saudi kingdom. KSA, US, UK are one group. They have created ISIS, Al-Qaeda, Israel and other terrorist groups for establishing illegal states and weapon depots in other countries.

The irony never seems to run out; US invaded Syria, flies freely within
Syrian territory murdering people at its pleasure and leisure, supports
terrorists, imposes illegal sanctions and nothing is done to stop it.
Pathetic from all parties.
Russia and coalition allowed US boots on the ground, a direct violation, when Kerry was Sec. of State and now a full blown invasion. Not impressed with their decision making.

Evil will not be appeased. Russia and Iran will stay (at the invite of the Syrian gov) while the seppo trash simply fuck off back to their side of the planet where they belong.

Its the nukes man the nukes. The us has used them once. The leveling of japan and germany in ww2 is not forgotten by americas potential enemies.

Russia has nukes as well.

Exactly and the us goes to great lengths to never attack them. All russia needs to do is place themselves in front of the syrians to protect them.

I cant see that as being in the pragmatic russian and chinese leaderships interests. Theyre not far enough removed from the memories of the horrors of the last major wars to waltz into that meat grinder

American leadership on the hand doesnt get it not in the visceral bloody sense of loss. Hence why american depradations are given such wide berth. They dont understand the consequences of their actions well enough.

“Full blown”?
I think you’re the one blowin’.

IMO, it’s better to use proxies and sacrifice them on the battlefield than using their own people. Granted there are Iranians and Russians on Syrian soil fighting, but the numbers are insignificant when compared to Syrians. I wouldn’t be surprised if Russian military commanders are expecting UK/US forces, dressed in another countries uniform like in Ukraine, to fight on Russia soil.

Americans can not handle defeat, so they will continue to bash their heads against the brick wall. until they run out of other peoples money.

Given isis resurgence in other supposedly liberated areas(suweida) im sure itll be temporary.

who in the HECK wrote this article? and why is it posted on southfront?
this reads like a CNN script.
some sixth grade civics class theme.
must be some newbie in the pentagram PR department.

Let them, there will be Casualties, it doesnt matter, heavy or light.
But we the people will ultimarly win this if we keep egging the Politicians on. Feed them statistics. this will make the Jews even more obvious.
This battle is a victory. no matter who wins or loses.

More bullshit from the zionist coalition of chaos.

This USA knows very well how to make me laugh.

Give them hell Isis. This will probably be the only time I ever wish Isis well.

Fixed it for you.

Fixed it for you even better – and for good!

Attacking with air conditioned coaches, to take them to the plane to Heathrow.

Now, let’s see why it took the SDF only days to take the Omar oil fields, but half a year to get rid of this tiny patch filled with ISIS dudes. We’d better get Stalingrad Mk.II coupled with Omaha Beach Mk.II slash Hamburger Hill. Because if this tiny ISIS enclave folds quicker then an Italian army at the sight of a British soldier then what the fuck was with the half year delay?

An attack in which the US will confuse ISIS with the SAA….again.

All they have to do is stop paying them and they will leave. Obviously, no one is hurt in the “operation”.