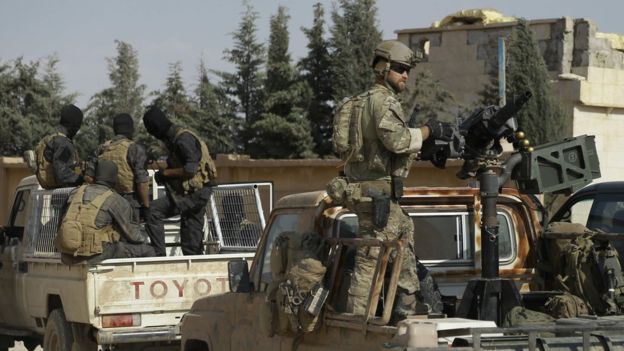 “American helicopters evacuated boxes containing large quantities of gold, which was hidden by ISIS terrorists in the area of al-Dashisha, east of the city of al-Shaddadah,” the SANA quoted a local eyewitness as saying.

According to the local sources, some of ISIS commanders who organized the transportation of the terrorist group’s gold were previously evacuated by the coalition.

Three days ago, the Syrian Observatory for Human Rights (SOHR) revealed the US-led coalition was demanding ISIS to hand over more than 40 tons of Gold, which were stolen by the terrorist group from different areas in Syria and Iraq over the last four years. Some of this gold was also smuggled from Turkey.

“The coalition is trying to force the group [ISIS] to surrender in order to seize its gold and money,” the pro-opposition monitoring group said.

The US-led coalition reached similar secret agreements with ISIS during the battles in Manbij, Tabqah and Raqqa. In all these cases, the coalition allowed the terrorist group to withdraw to “safe areas” with its military equipment, money and even prisoners.

That is usual Americunt modus operandi to fund global terror, stealing gold, drugs and gun running and every criminal activity under the sun. 10 Tons of ISIS gold has been stolen for future Wahhabi terror proxy wars from Afghanistan to Yemen. Now the focus is on Iran.

I think it always was since Zbigniew Brzezinski’s grand plan since the Jimmy Carter days.

Did anyone really expect anything different than the US government ferrying terrorists and stealing the gold in Syria? Demonstrates the TRUE VALUES that the government is so proud of.

It means that the world leads by robbers, lottors and thugs for very long time but now in 2019 these leaderships will be changed to new ones in Russia and China.

Hmmm, maybe some of it, but the Central Bank of Syria in Damascus hasn’t had gold stolen from it (yet). CIA gave lots of money and gold to the Sunni ex-Ba’athist Iraqi military leadership to help create the new Sunni-stan, and some of this gold went into the field. Since the outbreak of the Syrian civil war, Syria’s gold reserves were cut in half from the pre-civil war amount of around $17 billion, due to the Syrian government resorting to selling off its reserves as a way of coping with international sanctions.

It may be even Ukrainian gold. That lot was flown out of the country, to who knows where…

Yes! give it back in proportion to Syrian people and Iraqi People.

Do you mean your photo is a fake?

Fernando, check this out please.

Now is explained the fight between two groups that cheated each other on the gold split. Also that they send 600 special forces to find it.

I already hate the fact that America spawned these bastards but allows them to escape with their prisoners? That is even more disgusting.

I know of America’s Perfidy too long so believe this as well.

well, shi’ite, don’t blame me. I voted for Ron Paul.

ISIS stole a lot of things, and it would not surprise me if we never locate the legal owner of valuables like this in this mess.

Gold is worthless and is only good for decoration and plating electrical connectors.

Fair enough, it was given to them by the U.S. in the first place, stamped “U.S. Treasury.” ISIS has served its purpose, i.e. to secure the eastern part of Syria for the new country for the Sunni ex-Ba’athist Iraqi military leadership to serve as the bulwark for Israel/Saudi’s, and creating the incipient part of what they want to become Israel. Won’t work, but there ya go.

The US sold its gold to pay for Vietnam, but now they are desperate for gold? They also stole the gold in Ukraine and Libya. The Americans are worried their fiat house of cards is about to collapse and are trying to get some gold, to cover the 8000 tons they allegedly own. Or need some gold to sell to bring down the price.

With Treasury bonds paying less than 3%, many could be tempted to buy gold. Remember how Bitcoin took off? People are desperate to stash their cash somewhere governments can’t manipulate and steal. That’s always been gold and silver, and why Arabs Indians Chinese Jews and others always hold gold.

This gold ends up in London, not the US. The bullion banks and others stripped all the gold out of the US decades ago.

It would have to be purified and cast into good delivery bars before London would touch it. London stopped the London Gold Pool, because the US started supplying bars that contained copper. When Germany got some gold back from the US, something was wrong with it, because the Germans sent it to Switzerland to be purified and recast.

That’s bullshit. The US Treasury still holds a shitload of gold plus foreign governments keep their gold reserves in the USA because it’s the safest place in the world.

The only thing is, gold has been, and will be, stolen from the people. Look at Roosevelt’s Executive Order 6012 (from memory) of 1933 which bans the hoarding of gold or gold certificates on US territory, and led to gold confiscation from all US citizens. The point is, gold is not safe, and more than 50% of the gold certificates on the market are fake.

Yes well that’s what happens in police states, but out in the free world governments would fall if they stole peoples gold. The US has stolen gold, so did Hitler and Britain. Australia made it illegal to own gold, but paid the market price for the gold. So yes buying gold in the US is highly risky with its totalitarian government, but you could always escape to Canada or Mexico, unless they build a wall to stop you escaping.

…and everybody were just sitting on their thumb while this was going on?? Doing nothing?

Let me guess……the gold consists of jewelry and dental pieces looted from Syrian citizens? In this case, I suppose the American “coalition” is probably entitled to it.