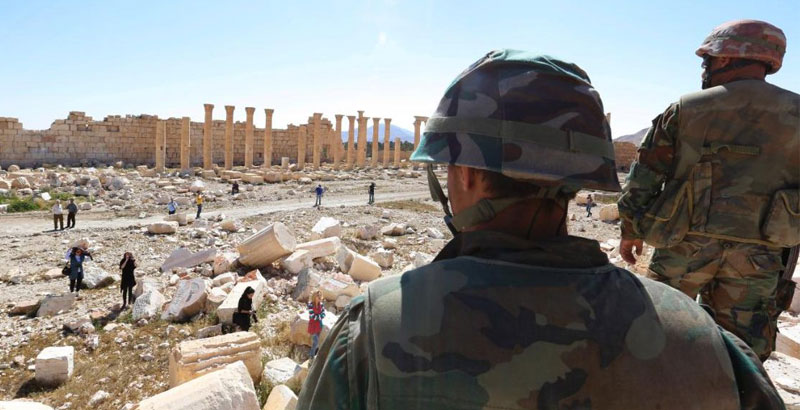 The international coalition will not operate against terrorists of the Islamic State (IS/ISIS) group in Palmyra during some time, as believes that the city should be liberated by efforts of Syria and Russia, commander of the international operation against the IS in Iraq and Syria, Lt. Gen. Steven Townsend, said,

He also noted that ancient Palmyra was “under the control of Russia and its Syrian allies.”

“They lost it, and now they have to get it back,” Townsend said.

There is also another reason – the coalition is not going to operate “more aggressively,” as it does not have enough information.

“We cannot distinguish one side from another one,” the commander said, stressing that the coalition is going to observe what is happening from the side and “allow Russia to deal with it.”

Good.Stay out of it. Enough of your mistakes!

When you consider the real truth that the so called ‘ISIS’ forces now at Palmyra are really US operatives and paid mercenaries.. Then you can understand exactly why the criminal US is NOT going to attack their own people!

Likely close to correct about us operatives. More likely though they’re paid by the wahabi saudi and qatari “governments” who are western central banking cartel vassals. They spread the ideology of wahabism/ salafism, that isn’t supported by the quran when taken in context, which is the ideology of many of the invaders of Syria. The us is helping isis, alnusra, and other wahabi terrorist groups /gangs in Syria in any way it can including providing intel daily and close air support on at least two occasions so far.

US-lead coalition does not intent to fight ISIS anywhere since ISIS is its creation.

Wooops! Anti-ISIS coalition is so incompetent that they could not stop hundreds, perhaps thousands escape Iraq, and they have turned up in Syria. We heard about that a couple of months ago already. And as they have escaped Iraq “we won’t do anything about it!” Laughably obvious what they are playing at. The anti-ISIS rhetoric is totally without conviction.

Political chess… Trump…if he gets past elector college and gets in the Whitehouse, Has Juggernaut of Neocons,state Dept, CIA,Pentagon. …who want/demand No Detente With Russia. They will use ISIS in Palmyra/Raqqa …as leverage that Assad and Putin have not defeated ISIS. Trump is forced to fight ISIS….and here. ..the deep state Can continue to hijack things, Like they did during Reagan. ..where Iran Contra was gun running,narcotics,death squads,defence budget.

They don’t want to risk another dubious, friendly fire incident like the one at Deir Ezzor. They could help by pushing onto Raqqa and pinning down some ISIS fighters but that’s a pipe dream because the Kurds and Turks are still at each other’s throats. The U.S. commander that predicted an offensive in ‘two weeks’ should be fired for incompetence but only Putin does that in his military.

Apparently they can’t distinguish one side from another in Irak either, since the number of Iraki soldiers killed by accidental US airstrikes.