According to spokesman for the Russian Defense Ministry, Major General Igor Konashenkov, the air power of the US-led coalition did not carry out airstrikes on oil production facilities, captured by Islamic State (IS) terrorists in Syria. 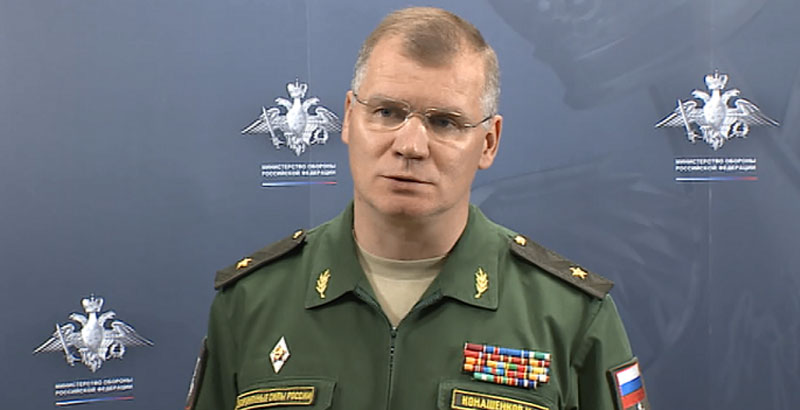 The US-led coalition did not target oil production facilities, seized by the Islamic State (IS) terrorist group on the territory of the Syrian Arab Republic, spokesman for the Russian Defense Ministry, Major General Igor Konashenkov said on Wednesday.

“Miraculously, only oil fields, captured by ISIS allowing the militants to earn tens of millions of dollars every month on illegal oil sales and recruit mercenaries from all over the world, did not come under the US bombardment,” Konashenkov said.

He also commented on a statement of Director of the Central Intelligence Agency (CIA) John Brennan, made on Tuesday, according to which, Russia is using a “scorched-earth policy” in Syria, which “led to devastation and thousands upon thousands of innocent deaths,” while “that’s not something that the United States would ever do in any of these military conflicts.”

“I would also like to remind [John Brennan] that international wars of the past decades unleashed by the US thanks to false CIA data in Yugoslavia, Iraq, Afghanistan, and Libya have all been started, continued, and finished with a destroyed economic infrastructure of these states by the US Air Force,” the Major General said, adding that it was “doubtfully a coincidence” that US companies, close to the CIA and the Pentagon, had “always” received contracts to rebuild these damaged infrastructures.

“John Brennan is perfectly aware of the real results of Russia’s actions in Syria. Specially for the CIA and special services alike, we announced them during the Russian Defense Ministry’s final board meeting,” Konashenkov stressed.

Earlier in December, Russian Defense Minister Sergey Shoigu said that the Syrian Armed Forces and their allies managed to liberate more than 12,300 square kilometers (4,750 square miles) of the Syrian territories, including almost 500 populated areas, from terrorists. He also added that 71,000 airstrikes on terrorist infrastructure facilities, which have eliminated 1,500 pieces of military equipment, 725 training camps and 405 arms factories, have been carried out by the Russian Aerospace Forces since the start of its operation in Syria. According to the Russian Defense Minister, 35,000 militants have been killed, while other 9,000 had laid down their arms.

“But the most important result, attained without the current US administration (or rather, without the involvement of the CIA), together with Iran and Turkey, is an agreement with the forces of the Syrian opposition, which came into effect on December 30, to cease hostilities and prepare for negotiations in Astana on the settlement of the Syrian conflict,” Shoigu concluded.

Next move would be to hold Obama, Clinton, Bush and some others accountable for their crimes. Unfortunately as long as the US controls the UN, ICC, Hague this will never happen unless individual countries put these perpetrators on a proxy trial, doubt if they have the courage and morality to appear in court.

I read another portion of his statement on https://www.almasdarnews.com/article/us-coalition-systematically-destroying-syrian-infrastructure-since-2012-russian-mod/ where he mentions that the U.S. coalition has systematically destroyed Syrian infrastructure. I believe it. I know that the U.S. bragged about bombing an electrical plant around Aleppo because it was controlled by ISIS even though it serviced all of Aleppo.

Do the Russians have a list of infrastructure destroyed by the U.S. coalition in Syria, if so is there a link?

You know about the water feeding Damascus being poisoned , yesterday its electrical power was sabotaged . The water claimed by Al Quada , don’t know enough about the electrical yet , but heard ISIS . This is a city of 5 million , in the middle of winter !

Of course the US isn’t attacking ISIS oil facilities. If ISIS lost the oil revenue the American tax payer would have to take up the lack in the ISIS budget, and the America tax payer is flat broke, and fed up.

Then Russia and/or Syria must bomb them immediately.

It’s becoming apparent now that the U.S. plan all along has been to turn Syria into a massive open-air extermination camp. Everything the U.S. has done there (or had their head-choppers do) was to prolong the slaughter or just make average Syrian civilians suffer. Now they have the head-choppers cutting all the utilities to the major cities. Typhoid and dysentery won’t be far behind. Maybe test out a few of those new biological weapons the U.S. is so eager to produce.

The U.S. never wanted the FSA to win or Assad to go – that was all just for PR. In retrospect, they have always wanted to see Syrians die and the country destroyed, just like Iraq, Libya and Afghanistan. Everything the U.S. has done up to this point makes perfect sense when you think about it as a grand scheme of genocide by proxy. Oil and pipelines are a bonus for oligarch jackals to pick over, but that was never the main reason the U.S. was there – it was to exterminate as many Syrians as possible.

Chaos and frightened people willing to welcome their ‘solutions’ because they have no alternative, that is the worldwide goal. Massive deaths help that goal along, and not just locally. They can go to other countries oppressed by CIA-backed terrorists and say “Quick, let us ‘save’ you from them, before you end up like Syria.” They can do the same routine at the UN. Besides, following the same centuries-old propaganda format, they can just blame all the deaths on Assad, Russia, etc, whether directly, or as a “consequence of their policies” and get even more mileage from it all.