The Danish government has decided to withdraw seven F-16 fighter jets, which took part in an operation of the international coalition against the Islamic State terrorist group in Syria and Iraq. 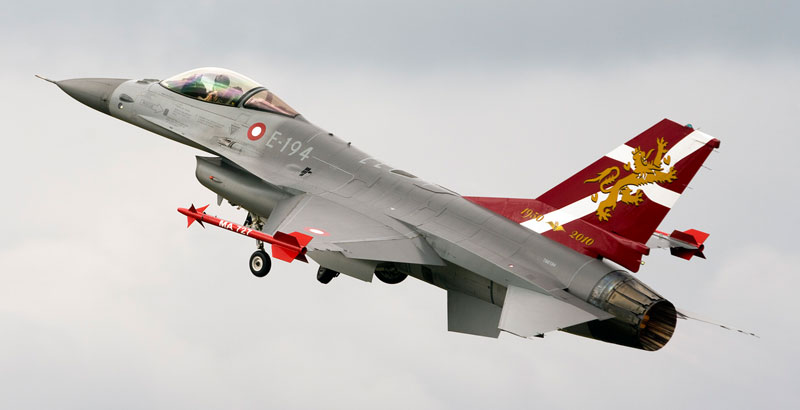 The Danish authorities intend to withdraw seven F-16 fighter jets, which took part in an operation of the international coalition against the Islamic State (IS) terrorist group in Syria and Iraq, the RIA Novosti news agency reported.

A military commission, which investigated incidents of the US, reported that Danish aircraft participated in an airstrike of the coalition on September 17, when a number of Syrian soldiers were killed.

Danish Foreign Minister Anders Samuelsen and Defense Minister Claus Hjort Frederiksen decided to withdraw the fighter jets after publication of these data. Reportedly, the aircraft will return to the country in mid-December.

At the same time, the Danish government announced that it is going to expand its assistance to Iraq in counseling on engineering and construction works, which will be carried out by about 150 specialists.

As it is known, warplanes of the Danish Air Force started to carry out airstrikes on IS terrorists in Syria and Iraq within the framework of the operation of the US-led coalition in August of the last year.

On September 17, fighter jets of the international coalition bombed Syrian troops, who were surrounded by IS terrorists in the area of the Deir ez-Zor airport. As a result of the four airstrikes, 83 soldiers were killed, while more than 100 others were wounded.

http://www.barenakedislam.com/wp-content/uploads/2015/06/maxresdefault-e13714097971411.jpg DENMARK: Muslim immigration means “Danes can no longer sit on their own balcony and eat a ham sandwich”

Shut up you pig

How can someone be named Brad Isherwood and not be a flaming cocksucker ?

What a load of crap ….. you can eat what you want where you want.

Thanks for the photo. In 10,000 ways they tell us that they come as conquerors and thieves but Westerners refuse to see this.

Thankfully Quebec abandoned bill 59 in 2016. The Sharia kooks were full court press to get bill 59 And in a Catholic Dominant Province!

It says they will be back in two weeks …

Work on that reading comprehension “Reportedly, the aircraft will return to the country in mid-December” home country Denmark……..

back in Denmark I believe

Probably to avoid legal persecution where Syrians have legal right to “arrest” those vehicles.

Good news. Sounds like the Danish are waking up to the truth.

They’re not waking up to anything, they just know they lost so they’re going home with their tail between their legs.

That seems reasonable. K2 to Denmark for knowing when to call it a day.

We all knew from the beginning that ISIS was the creation of the West, in this particular case It clearly shows it tried to help them.

Any country whose people have a shred of a conscience should get out of NATO and distance themselves from the warmongering US. The US is determined to get a World War going…and like the other two, we want it in someone else’s country…not ours. NATO is how they will accomplish this ….NATO is outdated and is no longer a “defense” organization, but an offense organization. The sooner NATO collapses, the better it will be for the world.

I am so glad that more and more people see the truth and don’t believe this nonsense that our soldiers are protecting their homeland when we have not been attacked.

Vic Pittman said it all. Europe needs independence from the USA. Friendly relations is one thing – Thralldom is quite another.