According to US military officials, there are about 23,000 Arab fighters in Syria, who are ready to fight against the Islamic State (IS) terrorist group in Raqqa. 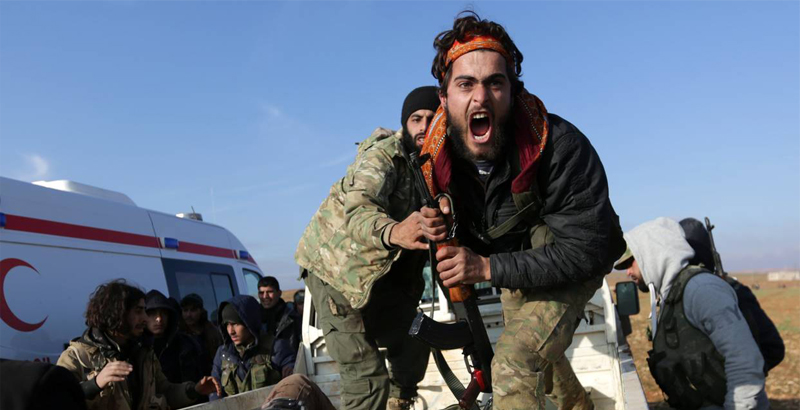 A fighter reacted this month after his brother died during an offensive against Islamic State terrorists near al-Bab in northern Syria (Photo: Reuters / Khalil Ashawi)

Currently, there are about 23,000 Arab fighters in Syria, who are ready to fight against the Islamic State (IS) terrorist group in Raqqa, and, according to US military officials, it is the enough number of the ground forces to vanquish the enemy in the city, the Wall Street Journal newspaper reported, citing multiple officials, familiar with the situation on the ground inside Syria.

US military officials said that assessing the number of forces on the ground is a challenge, but, at the same time, they noted that the number 23,000 was repeatedly confirmed.

As the US military told the Wall Street Journal, some part of these Arab fighters have been recruited from camps filled with Syrian refuges, who left their homes due to the war. Though, they are not professionally trained, these fighters are motivated to fight against the IS.

However, the newspaper also noted that the US assessment of the number of Arabs, ready to join the fight against the IS in Raqqa, is questioned by some Arab rebel groups, allied to the US-led coalition in Syria.

According to one Syrian tribal leader, who works with the US-led coalition, the US figures were released “merely to create media buzz.” He noted that these Arab fighters are already a part of the Kurdish-led Syrian Democratic Forces (SDF), and their number is around 1,200.

The newspaper also quoted words of another rebel official, Mahmood Al-Hadi, whose faction is one of the largest Arab groups within the anti-Islamic State coalition. Al-Hadi claims that the Arab force consists just of 1,500 fighters. “In reality there are not thousands of Arab fighters,” the rebel official said.

The US intends to use the Arab forces in Syria in order to iron out their political differences with Turkey, as well as to assuage concerns both in Syria and in Turkey that the Kurdish People’s Protection Units (YPG) will not try to grab and hold additional Syrian territories. Ankara considers the YPG as an offshoot of an internationally designated terror group in Turkey and is very discontented with the fact that the US support YPG fighters on the Syrian territory.

In any way, the offensive on Raqqa will not start until the US and Turkey will repair their relations, the newspaper stressed.

Most of the Arab fighters are not very competent I suggest.Probably like the people in ES.It will take a lot of time to take Raqqa.

Yes it will be a long operation (the media just likes to talk a lot). It appears that first Raqqa will be isolated. SDF/Kurds are now forming lines on sections of outer water canal. It is a great defensive position against ISUS. It forms a large horseshoe around city. The eastern side has not been occupied yet, it also ends at the Euphrates river.

The only way Raqqa can be isolated is by SAA taking the right bank at Taqbah Dam and airbase up to the two road bridges directly south of the city. Until this happens Dai ‘sh/ISIS freely move men/materiel up and down the N4 highway. When the SAA advance SE from Deir Hafir and NW from Ithriya then we are near the endgame.

I mean that Kurds and SDF can isolate Raqqa city and all points north of river in time. It does not depend on SAA reaching south bank to cut off N4 highway. The two bridges south of Raqqa can be taken out by coalition. It may take many strikes of 1 ton precision bombs on small sections, but it can be done. The north roads from dams can be be blocked a bit sooner. When eastern leg of horseshoe is taken, Raqqa is isolated except for boats!

I do not know what SAA timeline is, but they are starting to pressure ISUS front lines back. Deir Ezzor has the priority for air power for now.

I checked out the maps on Raqqa outer canal. It is a raised aquaduct and a good line to hold. ISUS does not have enough eyes in the sky, Kurds do!

There are five crossings in use from Tabqa Dam to Raqqa – Tabqa Dam, Railway Bridge, Baáth Dam, Road Bridge 1 & 2 .I repeat Raqqa has excellent natural defenses, it is SDF who are supposed to be attacking, they have not moved south of Tal Saman for months and are being stopped in their tracks when they come up against prepared defense positions. The closer SDF move towards Raqa the stronger Dai ‘sh resistence as they defend on ground of their choosing , where close air support is not so effective. In any case why should the Kurds want to die for Raqqa which is 100 % Syrian Arab ?

“it is SDF who are supposed to be attacking” Who has taken the most territory over the last three weeks against ISUS? Is it Turkey at Al Bab?!?! You may argue that some villages where only held by a squad, but at least some pressure is being applied against Raqqa. At least some of their reserves where diverted from the Deir Ezzor area!!

I think we are on the same side PZIVJ, I am a defender of Syria but I always try to be objective and realistic. This means I am not a cheerleader for NATO supported SDF and do not underestimate the enemy. Now Operation Euphrates Wrath jumped off from Ayn Issa four months ago and, yes, has succeeded in driving Dai ‘sh forces backwards to Raqqa, but from open countryside and will full US and French embedded support. I can’t understand why you seem to think the water barriers, choke points, wadi crossings, flooded riverbanks, bridges etc surrounding Raqqa help the SDF. Surely these are OBSTACLES for advancing forces (esp if bridges are mined/blown) and benefit the defenders, especially when they mount a flexible, delaying defense. The SDF claim some 600 enemy KIA in over four months, realistically say 300 allowing for over-stated claims that shows that Dai’sh has not yet suffered major losses. If SDF are content to sit around the outer perimeter defenses and spot for US/FR air strikes that’s fine by me, it does keep some enemy fixed there while SAA continue advancing from SW. I could be completely wrong, but I don’t expect a major assault on Raqqa city by SDF anytime soon.

It’s getting late now. I must rest and get up early. Will argue later :)

That’s OK – not arguing, just giving my view based on map/forces deployments and strengths

One must be realistic.

The SDF has the numbers for the attack on IS. What it does not have is the necessary arms and supplies. Also, SDF digs in in the new taken areas. That slows any advance, but guards against sudden counterattacks, something IS is very good at.

You are right, SDF is not yet at a position where they can really isolate Raqqah. They will have to cross the Euphrates both west and east of Raqqah.

For the west, they are at the Tabqa dam but have to take and cross it. Hard but doable if they are ready to take the implied losses.

A massive breach of forward defences of Raqqah can only successfully done from all sides, given the lack of heavy arms. And even then, it will take time and losses.

You are right about SDF methodical method of isolating Raqqa. It is a solid plan. But I still do not see why they have to cross Euphrates river at all to achieve mission. The two road bridges south of Raqqa can be taken out by coalition air when the time is right. After completing eastern leg of horseshoe along outer canal line and blocking dam roads on north shore of river. This is isolation! (except for boats)

As I was saying just a moment ago. I was not speaking of this terrain as helping SDF, I was referring only to raised outer canal. It both blocks ISUS line of sight and does not allow movement except at tunnels and bridges. Daesh loves their mobility for attack! It will allow SDF to concentrate force in other areas. There is still much work to be done to complete perimeter around Raqqa (the eastern leg is not even started!).

Dai ‘sh/ISIS hold excellent defensive perimeter with multiple prepared fall-back positions, are well organized, equipped, with high morale. Raqqa will not be taken by wishful thinking or hope, more like Grozny or Fallujah 2 or Ghouta East, that is slow, massive destruction . Never underestimate your enemy.

Kebab on Kebab violence is the best sort of violence.