The US-announced withdrawal from the INF Treaty is a hot topic and will remain such for a long time. This is a game-changing decision, but the evolution of land-based surface-to-surface systems also impacts the contemporary warfare providing the armed forces with new capabilities, including strikes at shorter- and medium ranges without using missiles covered by the INF. Organized by the Association of the United States Army, the AUSA 2018 expo took place from October 8 to 10 at the Walter E. Washington Convention Center in Washington DC. It was a mega-event to showcase the weaponry, which is to be used by the United States against peer adversaries – Russia and China. It demonstrated how rapid is the development of such weapons and how little attention media coverage it attracts. Long-range precision fire is a priority to alter the ways contemporary battles will be fought. According to the Long Range Fires Cross Functional Team, “the joint force needs surface-to-surface fires capable of firing at strategic ranges to defeat near-peer integrated air defense systems.”

“We’ve got to push the maximum range of all systems under development for close, deep and strategic, and we have got to outgun the enemy,” US Army General Robert Brown, head of US Army Pacific Command, said during a panel discussion at the Global Force Symposium in March. “We don’t do that right now; it’s a huge gap. … We need cannons that fire as far as rockets today. We need rockets that fire as far as today’s missiles, and we need missiles out to 499 kilometers.”

It should be noted that the official was talking about the range of 500 km not to be exceeded according to the INF Treaty, emphasizing the importance of ground-based weapons systems with intermediate-range capabilities. The mission is to field barrel-launched rockets and rounds that can fire at far greater distances. Col. Chris Mills, project manager, Precision Fires Rocket and Missile Systems, said at the AUSA 2018 that the possibility of increasing the Precision Strike Missile’s (PrSM) range will be considered in case the US is out from the treaty.

The new PrSM is developed to replace the Army Tactical Missile System (ATACMS) providing increased standoff range enabling it to strike targets over 310 miles away or nearly 125 miles greater than that of ATACMS. It will also be more accurate and smaller. Low-observable platforms, such as the F-35 plane, will further extend that sensor range. It has been reported that the plans are being reviewed in order to accelerate the timeline from 2027 to an initial capability in the force by late 2022 or early 2023. One does not have to be a military expert to see that Russian S-300 and S-400 surface-to-air systems will be the prime targets for PrSMs with no aviation used and thus no expensive aircraft exposed.

With the US decision to tear up the INF treaty, the Strategic Long Range Cannon (SLRC) comes into the picture. The aim is to field an artillery piece firing chemically or electro-magnetically propelled rounds roughly 1,000 miles away without formally violating the INF because the rounds are not missiles. Army Futures Command’s chief, Gen. John Murray, told the House Armed Services Committee the service “is also looking at what we call the Strategic Long Range Cannon, which conceivably could have a range of up to 1,000 nautical miles.”

With a long barrel used, a shell can be propelled by multiple explosive charges to build up pressure behind the projectile like a rocket, extending range. A larger railgun is also an option if ways to provide power to make the range comparable to shorter- or medium range weapons are found.

So, the US Army is looking for precision-guided conventional weapons with intermediate range. As soon as the treaty is dead, the technology will be fielded and the development of better systems incentivized. With high precision technology, these weapons don’t have to be nuclear.

Unmanned aerial vehicles (UAVs) will provide guidance data to artillery systems, which knock out Russian air defense systems to pave the way for aviation striking deep to destroy key infrastructure sites. Long-range, precision guidance capable artillery will take out Russian aircraft and missiles, such as Iskander, on the ground. Hyper Velocity Projectiles now going through tests would turn the ground-based artillery and rocket systems into shorter-and medium-range offensive weapons doing largely the same job the ground-based systems intermediate-range ground-based missiles were destined for. Actually, with such systems in place, the INF Treaty would lose its relevance even if in place.

This is part of a broader picture as new weapon systems emerge along with the arms race encompassing new domains. It’s either addressing the issues via talks to control their development or let it slide into an unfettered competition. The US has chosen the latter. It has rejected the proposals to address cybersecurity as well as the problems related to space militarization. The announcement to leave the INF Treaty made the US responsible for the consequences. The reluctance to address the problem of new game-changing weapon systems emerging to change the modern warfare also makes it responsible for what happens afterwards, including Russia’s response. The US should be reminded of it at every international forum. Hopefully, it will.

americans have yet to digest that warriors win battles not weapons. They been at it since WW2 when the russians saved their as*ses and been losing ever since every war they initiated attacking other countries and now of course they have their secret weapons they did not have before all the queers and lesbians leading their armies so maybe they fell lucky.

That is nothing Greek.

Any aggression or attack by a US/Nato force to Russian territory, Russia will respond with nuclear weapons from whence came the orders. Therefore, Russia will counterattack the United States. Do not expect the United States to be unscathed if the Pentagon attacks Russia. America is playing with thermonuclear fire.

Yeah Sure U.S…..put some extra Debt on the 210 Trillion Dollar you already borrowed from the rest of the World…

What a nice example of American exceptionalism :)

A Strategic Culture writer has shared views on what might be the INF treaty non compliant weapon of choice to be deployed near RF’s European borders or in South Korea if they were allowed in.
It is talking of conventional cheap low observable small cross section munitions of much longer range or installed close to RF and Belorrusian borders. This will be launched via MLRS or also electromagnetic Rail Guns that could overwhelm Russian SAMs. The saturation salvos may be re targetted using low observable small cross section stealth drones. Of course the follow on wave of cruise and ballistic missiles will finish the job.
The production of these systems can be ramped up really quickly.
My question to Anyone knowledgeable is: Since the RF posture is largely defensive. What could the RF do to neutralize this threat?

So, you are saying that nothing “defensive” can be done against this threat.

How very un Sun Tzu of you, nukes are defensive.
Once you see that nations invade other nations to steal, and using nukes destroys the things you want to steal, you then realize that nukes can only be used as defensive weapons.
The US would have invaded the Soviet Union decades ago if not for nukes.

I am not moralizing. I asked: since the RF posture is defensive ( which precludes a pre emptive first strike ) what can RF do to neutralize this threat? Your answer: NUKEM. Well that isn’t defensive.

First off, it requires means of detection of swarms of low observable small cross section shells, rockets and stealth UAVs. Second it requires a cheap way of neutralizing them. I was thinking of the New Mobile Laser AD.

Your non answer is noted.

OK I will give a more sensible answer.
First up the US doesn’t have these weapons yet, and knowing how long it takes the US to develop new weapons it will be at least a decade before they are deployed. Russia cannot devise a defense against a hypothetical weapon.
I would tend to think that the US will use one or more of its old missiles, that has been modified. Both China and Russia believe that the American THAAD system is in fact an intermediate range ballistic missile masquerading as an anti missile system.
So at the moment, if the US launches a sneak nuclear attack on Russia, using the THAAD missiles in Poland, the only recourse for Russia would be to retaliate using tactical nukes.
The US is actually putting more emphasis on China, because China has a limited number of nuclear weapons, and the US would have a much better chance of nuking all the Chinese nukes in their silo’s than it would with an attack on Russia.

But at the moment the only viable response to a US nuclear attack, is to return fire using nukes.

Thanks. I agree with China being preferred target leaving NATO to deal with RF so that it cannot help China. But i still think that USA could deploy artillery with MLRS or Rail Guns in Europe if sufficient power were available as the latter are power hogs. RF has started to deploy the Samarkand EMP weapon system that could fry all electronics in most systems including autonomous or semi autonomous BM and CM. So the saturation of RF’s SAMs by longer range MLRS (it just needs longer barrels and more umph ( HE) doesn’t need ten years of R&D. Moreover, as these dumb (without electronics) rockets they are immune to EMP radiation. Also, they could use existing range artillery deployed just closer to RF borders in Baltics, Poland, Ukraine. Where i am going with this is that at some point this endless chess game with check and counter checks ends up with a first strike even if contrary to stated nuclear doctrine.

“My question to Anyone knowledgeable is: Since the RF posture is largely defensive. What could the RF do to neutralize this threat?”

3 of these back to the source of the attack 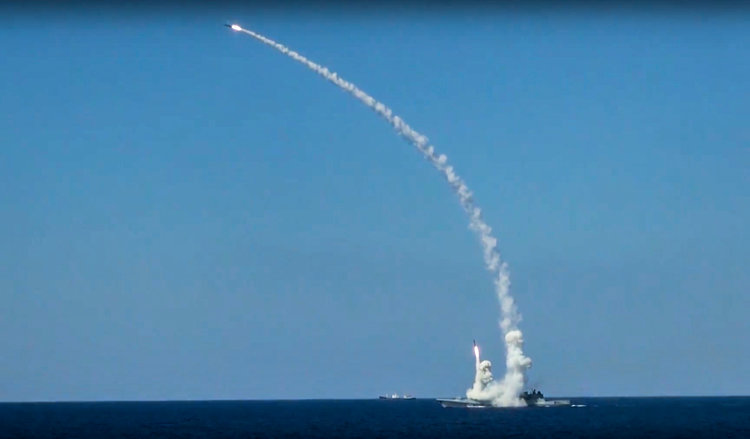