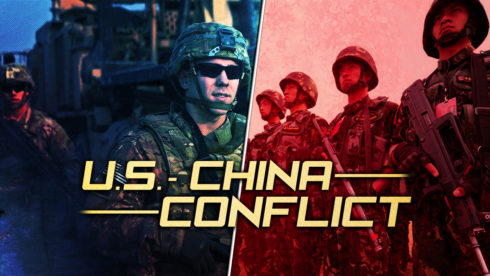 America may need to accept it’s no longer No.1, or risk dragging the world into a catastrophic conflict…

The drums of war are beating. Countless films and books have been produced on the subject of war with China, but it seems now, we are closer than ever before to some kind of military conflict.

The fact that such a military confrontation would be catastrophic and devastating for all parties concerned seems so blatantly obvious that it needn’t be said; and yet because the American military establishment is actually discussing ‘war with China’ one finds it necessary to repeat it. As retired US army lieutenant colonel Daniel L Davis writes:

“There is almost no scenario in which the United States can successfully intervene in a war between China and Taiwan that will not leave our country in far worse shape than it is right now; in a worst-case scenario, American territory could be struck by nuclear missiles.”

Yet there are increasing signs that some in the US establishment are prepared, in principle, to use military force against China over Taiwan. In February this year Senator Rick Scott reintroduced the Taiwan Invasion Prevention Act, sponsored by Congressman Guy Reschenthaler in the US House of Representatives, to “protect Taiwan from Communist China’s growing aggression”. He said:

“It is no secret that General Secretary Xi is bent on world domination. The United States cannot sit back and let this happen…The Biden Administration’s appeasement policy toward Communist China is dangerous. If President Biden fails to stand up to General Secretary Xi, it will have absolutely devastating consequences for the national security of the U.S. and our allies.”

He obviously doesn’t appreciate the ‘devastating consequences’ that would come from war with the PRC.

Last Friday the Deputy US Secretary of Defense, Kathleen Hicks, said that in a scenario where China was to invade Taiwan, “we have a significant amount of capability forward in the region to tamp down any such potential”. As David Davis pointed out in his latest piece for The Guardian, “Either Hicks is unaware of how little wartime capacity we actually have forward deployed in the Indo-Pacific or she’s unaware of how significant China’s capacity is off its shores, but whichever the case, we are in no way guaranteed to “tamp down” a Chinese invasion of Taiwan.”

A Hoover Institution discussion earlier this year with retired US general H R McMaster and former White House advisor Matt Pottinger also highlighted just how eclipsed the US is, militarily, in the Asia Pacific region. China far surpasses the US in terms of military equipment, particularly in numbers of warships, fighter jets and submarines. It was agreed during the conversation that the US administration had been ‘complacent’ about the rise of China and that the US was potentially on a path to ‘exquisite irrelevance’. The question was asked whether the US was ‘overextended’.

As historian Niall Fergusson has said: “As a student of history I see a very dangerous situation. The US commitment to Taiwan has grown verbally stronger as it has become militarily weaker. Perhaps Taiwan will turn out to be to the American empire what Suez was to the British empire in 1956: the moment when the imperial lion is exposed as a paper tiger. Losing Taiwan would be seen all over Asia as the end of American predominance. It would cause a run on the dollar. It would be the American Suez.”

A RAND document from 2016 entitled ‘War with China: Thinking Through the Unthinkable’ also supports the fact that a US win in such a conflict is far from guaranteed. It concludes:

“As China’s military improvements neutralize the military advantages of the United States, and because technology favors conventional counterforce, war between the two countries could be intense, last a year or more, have no winner, and inflict huge losses and costs on both sides. The longer such a war continued, the more significant economic, domestic political, and international effects would become.”

Daniel Davis goes further to say that the most likely outcome of such a war would be ‘conventional defeat’ for the US, or even worse, it escalates into a nuclear exchange.

Yet through the US’ continued aggressive rhetoric, and support of Taiwanese independence both financially and militarily it continues to provoke China into a conflict it quite frankly couldn’t handle. After a record number of People’s Liberation Army flights took place in Taiwan’s Air Defense Identification Zone over the weekend, the US issued a statement saying it urged Beijing to stop such provocative measures against Taiwan. The Chinese Foreign Ministry responded by pointing out that it is the US that is ramping up tensions in the area by encroaching on China’s sphere of influence. It reminded the US that “Taiwan belonged to China” and accused it of making ‘”irresponsible remarks”.

The Foreign Ministry also detailed the ways in which the US is interfering in the situation by “making negative moves by selling arms to Taiwan and strengthening official and military ties with Taiwan, including the launch of a $750 million arms sale plan to Taiwan, the landing of the US military aircraft in Taiwan and frequent sailing of US warships across the Taiwan Strait.”

The reality is, Americans seem incapable of seeing their actions from an objective viewpoint. What would they do if China were to support Puerto Rico’s independence, for example, from the US, militarily and financially? What right does the US have to interfere in that part of the world? US think-tanks and military officials are clearly perturbed by the fact that China has greater influence in its own backyard than the US does; how would they feel if China was to start meddling close to America’s borders?

Furthermore, there is the fact that as the world’s No.1/No.2 economic superpower – depending on how you measure it – the entire globe is now dependent on China. As we are so deeply integrated, any conflict would have absolutely disastrous effects on global supply chains – our societies could literally collapse into chaos. As Ewan Hanson, a US air force logistics officer writes: “From the development of rare-earth element mines to the Belt and Road Initiative that aims to connect markets across Europe, Africa, Asia and Australia, China’s control of supply chains and infrastructure is unmatched”.

It’s predicted that by 2030 the PCR’s economy will be twice as big as the US’. Has this all  been given due thought? As Craig Murray recently put it in a letter to The National newspaper: “The West…cannot possibly ‘win’ a cold war against a country which has trillions in dollars of resources and is the world’s largest source of manufactured goods. To initiate an arms race with China is madness.”

Mad, perhaps. Ignorant and arrogant, definitely. Whatever it is, the US needs to reign in some of its hawks before they take the country on a path to nuclear Armageddon. Perhaps for the first time in its history America is going to have to accept the fact that it’s no longer No.1.

“It is no secret that General Secretary Xi is bent on world domination. The United States cannot sit back and let this happen…”

His past business was fined into oblivion for defrauding Medicare and many other government run social programs. He should be in prison. Read his bio. He ticks off all red flags as a zionist/anglo tool.

Regarding China vs Taiwan, 90+℅ of Taiwanese people are ethnic Han Chinese. The president is a born traitor “educated” in the west. tsai ing wen is an imposter. Any foreign military intervention in Chinese affairs also draws in Russian support by default, not to mention at least a dozen other nations in the region.

Imposters like “rick scott” babble on as they are told. He should have changed his birth name to “Jim Bob”.

Nothing is goin happen bro…….just propaganda and hype. The US and China need each other in trade like kir in the koon!……..you getting it? If yous Iranian that is?…….lol

Maybe no direct confrontation but expect lots of attempts at proxy wars.

“US KNOWS IT COULD LOSE A WAR AGAINST CHINA, SO WHY IS IT PROVOKING IT?”

There will be no war between the US and China. They’ve agreed on a “NWO”, a corporate dictatorship with total digital control. They’re just marking off their respective claims. That’s all. There are still some countries, that don’t play along, at least not fully. Among them Russia and Turkey. Yes, both! You may not like one or the other, but that’s why they’re trying to coordinate all the time, despite their antagonism e.g. in Syria. They still have plans for their own. If nations in Europe, especially the bigger ones would seek more independence from NATO, that would also change the equation. In the case of Germany a rapprochement with Russia would make a lot of sense; unfortunately, German politics is enthralled by NATO and with the current careerists this is not likely to change. France seems to be a better candidate. Prominent figures have voiced their dissatisfaction with NATO and are calling for France to leave the organisation. In my personal opinion a strong European-Russian cooperation would be highly beneficial. That would need assurances for the nations inbetween, the Baltic states, Poland, Czech Republic etc., quite understandably. The core of this would be Germany and Russia, with the more western countries more losely joined, still guaranteeing their ability to act independently. Well, we’ll see.

History shows that every empire eventually gets the war it is trying to avoid, stumbling inescapably and blindly into it. The US has no choice but fight China. With no choice it must convince itself it will win. But it will lose: the whole planet will. https://www.ghostsofhistory.wordpress.com/

One evil against another evil.