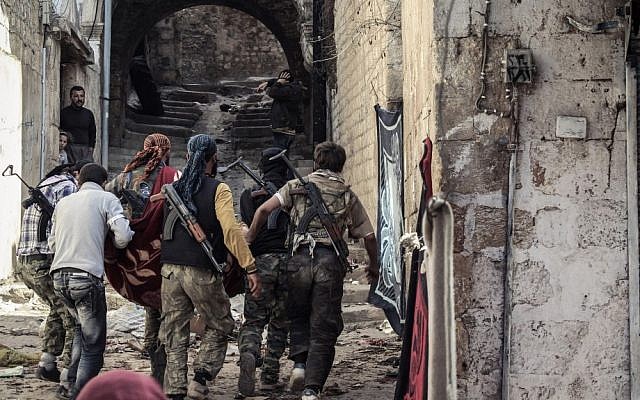 Russia’s Ministry of Defense stated that the US had indirectly recognized the use of chemical weapons by Jabhat an-Nusra. The US State Department website says that al-Nusra affiliated groups used chemical weapons in Idlib.

The US State Department issued a new statement, warning the US citizens against all travel to Syria. Russia’s Ministry of Defense noted a mention of Jabhat an-Nusra using chemical weapons in the statement, RBK reports.

The statement, issued on October 18, also featured a list of tactics the terrorists employ. “Tactics of ISIS, Hayat Tahrir al-Sham, and other violent extremist groups include the use of suicide bombers, kidnapping, small and heavy arms, improvised explosive devices, and chemical weapons.” Chemical weapons are used “with little to no warning”, the website warned. It also mentioned that the terrorists kidnap children.

Russia’s Defense Ministry considered this the “first official acknowledgement” the US State Department made of the Jabhat an-Nusra terrorists using “chemical weapons” in Idlib in order to commit “terroristic acts”.

The Defense Ministry cited the last known use of chemical weapons case to be the April 4 Khan Shaykhun attack in Idlib province, in which dozens of civilians were killed. According to the US officials, the attack was conducted by the Syrian Army aviation forces. Russia’s Ministry of Defence had claimed that the Syrian planes shot a weapons depot, where “workshops which produced chemical warfare munitions” were situated. In an October 20 statement the Ministry of Defense called the chemical attack in Khan Shaykhun a Jabhat an-Nusra terrorist act.

This is United Shit of Asses (USA ).After realising that it is looking hold on Syria, USA is exposing and accusing its moderate terrorists.All the terrorist including SDF,Saudi Arabia must learn and know their masters USA has track record of betrayal for its slaves.

not a single word on the ambush in which US servicemen fell in Niger? I f I was to follow the war on the calyphate only from SF I would not even know about the attack.

Wonderful. That ought to put a cap on the rumors. Please make sure to re-edit your post with the source.

Yes. Please keep us posted with source or updates. Keeping my fingers crossed.

The Russian MoD considers more probable & to the point , that an explosive charge set-off by Nusra hit the top of a sarin-filled bomb , laid on the ground. The workshop hit by SyAF was manufacturing chlorine-filled bombs. The crater seen in the photos was 1-1,5 m , this corresponds to that scenario.

Wow! US throwing in the towel again!

There’s $2 billion worth of eastern European weapons en route to somebody ‘good’. The towel has not been chucked.

The US is in way to deep and unable to extricate itself in this shitstorm,any deeper then they’re finished. No happy times ahead for them.

Oh yes it has – they have admitted that the talk about chemical weapons was a sham!

After US/Nato 60 countries Coalition have liberated 90% of Syria for ISIS and allowed 600 000 Syrian civilians to return to their homes, Hitler Putin, Butcher Assad and the Worlds terrorist organisation no.1 Iran are now desperately delivering chemical weapons to terrorists in Syria to not allow ordinary Syrians to vote for freedom and gay parades.

I love satire and yep, you can see the headlines as you speak.

Oooooo, how would they know it? Did they maybe supply the chem. stuff?