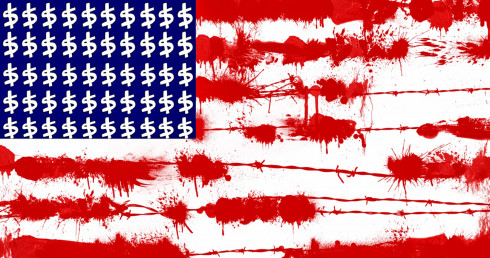 This leaves the world with a very clear choice; either make sure economic and financial independence is guarded at all costs, or remain in perpetual slavery for the benefit of a distant thalassocracy.

In addition to spreading its wanton “freedom and democracy”, usually with ample quantities of bombs and cruise missiles, the United States is also “exporting” its economic and financial issues, causing a cascading effect of economic and, consequently, general instability. One of those “export products” is inflation. With the USD as the primary global reserve currency, the US, although in decline, is still in the position to make sure its economic problems affect the rest of the world, causing global economic and financial crises whenever this is suitable for Washington DC, but also keeping all of the very real benefits when “times are good”. And the world has been paying for it at least since the end of WWII.

Charles Hugh Smith, an independent journalist focusing on global finance, energy, culture and political economy, as well as the geopolitical impact of all those factors, recently published an analysis on how the US is conducting its policy of “inflation export”. According to Smith, a strong currency exports inflation to those nations which do not issue the currency. He identifies three major factors:

1) price is set on the margins;

2) currencies are the foundation of every economy;

3) the financial forecasts issued to calm the public do not reflect operative geopolitical goals.

“…nations have relatively few levers they can pull to influence global finance, trade, growth, currencies or the geopolitical balance of power. One such lever is the interest the state pays on its sovereign bonds. If a central bank/state increases the interest it pays on its bonds, that attracts capital seeking higher return. This inflow of capital strengthens demand for its currency, because the bonds are denominated in the state’s currency. As the currency strengthens vis-a-vis other currencies, it buys more goods and services. Imports become cheaper and the nation’s exports become more costly to those using other currencies,” Smith claims.

“Another lever is to reduce commodity exports, especially energy and grains. If this reduces the global supply, the price leaps. If allies get the exports and enemies don’t, this punishes enemies and rewards allies. A third lever is to limit imports. A consumer nation can limit imports from specific exporters, or make do with domestic supplies, or only buy from allies. A fourth lever is to meet with allies and reach an agreement about finance and commodities to stave off imbalances that threaten the stability of the alliance,” he adds.

According to Smith, a good example of this is the 1985 Plaza Accord that weakened the US dollar at the expense of the Japanese yen and major European currencies. The strong dollar had a deeply negative impact on US exports and was generating trade deficits in the US.

According to Smith, since the Plaza Accord, the US has been seeking to keep USD relatively weak to limit trade deficits. However, this weak-dollar policy has changed. The soaring USD is adding a currency “surcharge” on top of rising prices of oil, grain and other essential commodities.

“The yen has weakened 20% against the USD. This means every commodity priced in USD is 20% higher in price for those using yen. Add the increase in cost due to global scarcities and that’s a double-whammy hit of inflation. These sharp increases in inflation/price of essentials are recessionary, as demand craters. People simply don’t have enough earnings to pay higher costs for essentials and maintain their discretionary spending on goods and services,” Smith states.

He further adds: “…price is set on the margins. If supply of oil falls 5 million barrels per day (BPD), price rises. But if demand falls 10 million BPD, the price of oil plummets. As the price of oil falls, oil exporters receive much less money, and so they compensate by pumping more oil. This serves to further depress prices.”

Smith then asks: “Who would benefit from a rising US dollar and a global recession, and who would be hurt? The US would benefit from a higher USD because that lowers the cost of all imports. Everyone else using weaker currencies would pay more for imported commodities. As demand for oil falls, price plummets. That helps consumer nations and hurts oil exporters. As the USD rises, it drags every currency pegged to the USD higher with it, making their exports more expensive. That would pressure China’s exports, forcing China to adjust its currency peg, reducing the purchasing power of everyone using yuan/RMB.”

“Is the looming global recession merely “bad luck” or could an unavoidable global recession be “nudged” to serve geopolitical aims? The forces that have been unleashed (higher interest rates, scarcities, strong dollar) will take time to work through the global economy. The USD may drop and oil may rise over the next few months, but where will global demand and oil be in a year?” he further points out.

“Many people expect the dollar to weaken and the Fed to lower interest rates back to zero once the recession becomes undeniable. I am not so sure. A case can be made that interest rates have completed a 40-year cycle of decline and are now in a secular cycle higher. A case can also be made that the weak-dollar policy has ended and the dollar will move higher, accelerating the financial and geopolitical consequences described above. A strong currency exports inflation to those nations which do not issue the currency. Luck, coincidence, or “nudge”?” Smith concludes.

This leaves the world with a very clear choice; either make sure economic and financial independence is guarded at all costs, or remain in perpetual slavery for the benefit of a distant imperialist thalassocracy which in the best case offers nothing in return. At worst, it offers an unlimited amount of death, destruction and general suffering, all of which is economically supported by the slaves themselves.

Russia was not ready to begin its military push back against US hegemony in 2014.

It was a race during 2022 for Russia to equip its latest Hypersonic missiles into the military forces in order to neuter NATO.

There is also statecraft which should have pushed the Anglo-Zi0ni$tas early on!…

Putin with never live this one down (https://theduran.com/putin-911-not-inside-job/) when he made these statement(s) nearly 3 years after Maidan. Nor will India and China for being the carrions (http://www.911research.wtc7.net/wtc/groundzero/cleanup.html) that that they were and still “are” as long as they remain in the UN Ca$in0 in the participation of that crime scene that bought their $ilence in exchange for America’s manufacturing at the expense of Afghanistan, Iraq, Libya, Syria, Yemen and Ukraine!…

We are just a smart and intelligent people, and you are not very smart. Thats the difference………LOL.