The Pentagon intends to dispatch 1,000 more US troops to northern Syria. 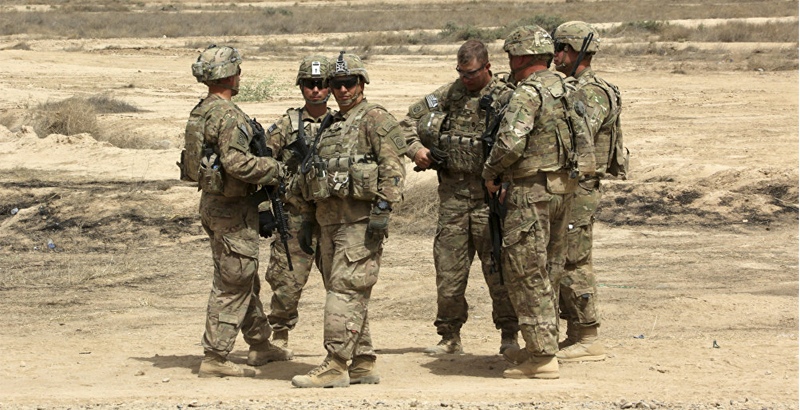 The US is going to dispatch 1,000 more servicemen to northern Syria, the AFP news agency reported on Wednesday, citing an unnamed Pentagon official. The news agency’s source noted that the provisional plans of the Pentagon have not been still approved by US President Donald Trump and Defense Secretary Jim Mattis.

“That’s one of the proposals that’s on the table for discussion,” the official said.

According to AFP, at the moment, there are between 800 and 900 soldiers of the US Special Forces in Syria. The Pentagon claims that they are engaged only in training and assisting to the Kurdish forces, fighting against the Islamic State (IS) and other terrorist groups on the country’s territory.

As the official noted, the decision on sending additional US troops to Syria depends on Trump, who has ordered Mattis to put together a viable proposal to resolve the ongoing crisis in the Arab country.

Last month, a top US commander for the Middle East, General Joseph Votel, said that intensification of the war against IS terrorists in Syria might need more US troops, deployed in the country.

Also last month, the CNN TV-channel reported that Trump might be persuaded by the Pentagon to authorize sending thousands of combat troops to Syria. “It’s possible that you may see conventional forces hit the ground in Syria for some period of time,” the TV-channel announced, citing a US defense official.

Meanwhile, last week, Syrian President Bashar al-Assad said that US troops on the territory of Syria are “invaders,” as their presence had not been agreed with the country’s authorities. “Any foreign troops, coming to Syria without our invitation or consultation or permission, they are invaders, whether they are American, Turkish, or any other one,” the Syrian President told the Phoenix TV television channel.

Thousand more US terrorists are coming to Syria ! Bad news

The definition of stupidity:

“Stupidity is doing the same thing, over and over again expecting different results”

they need to get some glory too. Otherwise, Russia would take all the credit for destroying the caliphate, and the whole ISIS pantomime would become a setback for its creators

Jesus H. Christ! The US war economy is really running at full speed. Let’s see: wars in Afghanistan (remember that one, the original), Iraq (still), destruction of Libya, Syria (why), occasional drone attacks and a SF raid in Yemen and periodic drone attacks in Somalia and Pakistan. US foreign policy has clearly run amok. Why should anyone be surprised? The US is a very violent society , not only in its foreign policy but also domestically. For example there were 15,696 murders recorded in 2015. Last year’s numbers are not in yet but the FBI predicts over 17,000. All this nonsense about the US being an advanced economy and a democracy are a sick joke a la Reichsminister Dr. Goebbels. This democracy had only a disgraceful 52% participation rate among the voting age population in the 2016 general election. The economy is riddled with false unemployment numbers, a 15% poverty rate, over 46 million people needing government assistance to purchase food (out of 325 million people), etc. Greetings from The Big Apple – New York City, where we had “only” 334 murders last year!

wonder why they never subtract national debt from the gdp, when they write the statistics about national economies.

Probably because the debt is purely notional, will never and can never be repaid, and bond interest is serviced by printing more money ( quantitative easing ! ) Until a critical mass of advanced large states BRICS dump their dollar “assets” from their foreign currency reserves and conduct trade in other currencies/gold/barter/credits etc.. the US can. and will continue acting as the worlds banker able to create unlimited money.

in the end gdp isn’t less notional than debt – actually it could be even more notional. I’d also like to know how the illegal, hidden economies worth billions (or more) of dollars in the US and the west in general interact with the “official” ones and what effects they exert. I believe it’s pretty undocumented and unknown outside certain circles, yet it’s a big part of the whole picture. Some months ago I read a book on organized crime whose author stated that there is at least as much “dirty” money around as there is “clean”

What are these illegal hidden economies you speak of?

I’m talking about all the money used to buy drugs, weapons, prostitutes and so on.

Oh yea, I’d like to know about that too

I know man I really am not proud of my country at ALL anymore, nor do I have any respect for the military anymore. In fact now I have the utmost respect for the Syrian, Russian and Iranian militaries for their nonstop 100% fight against terrorism and zionism

My comment may seem to be anti-American to some people, mainly the uninformed, misinformed and brain-washed but sometimes the truth hurts. As a side note, in my younger days I was a US Army officer (also airborne qualified) in the 1980s and even back then I saw the beginnings of our armed forces and country’s decline. the Army was turning into one big social experiment, all image and very little substance and capability. I thank the heavens that we (NATO) did not have to fight the Warsaw Pact. Many of us would not be among the living today. How do the chicken hawk political leaders and military careerist/pension/rank hungry losers – their records in the last few decades speaks for itself – explain to the relatives of the dead and maimed why they had to go to these perpetual wars? Have you also noticed that most of these failure geniuses have more awards and decorations than a Patton, Eisenhower or MacArthur? Our country is in a really sick, rotten to the core situation with no end in sight.

I know man, I think its beyond saving at this point :( although that might be a good thing, considering at what a fat, broke, corrupt monster it has turned into

Back in the 80ies, early especially, there still was the gloom of the Vietnam war over the US Army and the USMC. It was deemed completely unacceptable to participate in operations involving casualties, as the public was very attentive to the issue and had the power to topple cabinets and administrations.

That was partly rectified with Desert Shield / Storm – the American people kind of found an enthusiasm in their military again.

Sadly the response of the Americans to the bloodshed that started after 911 has been too weak. The war on terror has caused thousands of KIA and MIA, an atrocious number of young soldiers maimed and permanently disabled phisycally, and an even greater number of people who’s been mentally crippled (the number of suicides among veterans is way higher than ever).

As a person who have the utmost respect for servicemen in general, I despise how the US military has been used and suffered in fighting wars who were never intended to protect the American people, but instead served the interests of a masonic, zionist elite that still today dictates US foreign policies through financial and personal blackmail.

These days Donald Trump looks as if he already received the threats of these scumbags – I wish him and the US people strength and lucidity in such a difficult moment.

We do not want any American troops anywhere in the world outside of America itself. We were wrong to invade in the First World War, and had we not gotten involved, the second world war would not have happened.

Are you sure about your history? US was pacifist before WW1 and did not want to get involved in the never ending European conflicts. Also in WW2 they where forced to take action. Hitler declared war on America after pearl harbor attack. Germany would have lost WW1 even without US support, it would have taken longer.

Now is the time for Russia , Iran and China to step up to the plate , or face defeat in Syria , which means Iran is next . Deploy five thousand troops each , with Assad’s consent , and the US will back off . Power loves a vacuum , ISIS is done , let the troops holding ground , be the welcome ones not the unwelcome ones . Let the Americans liberate Raqqa , then point them at Turkey , that has just declared war on Europe .

Deploying all these foreign troops is risky. I don’t think the local Muslim population would agree with this at all. SAA with support is making advances.

I’m sure they already don’t agree with US and turkey bring there, I think they would actually welcome more support for the SAA