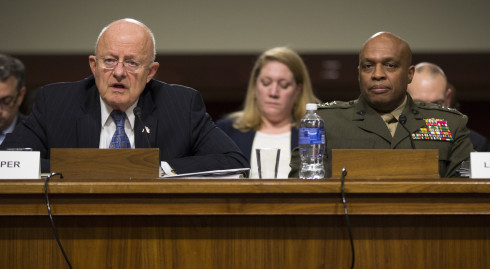 James R. Clapper marked the Islamic State as the “pre-eminent terrorist threat”, which militant group can “direct and inspire attacks against a wide range of targets around the world”. He stated that leaders of the Islamic State were determined to strike targets in the United States in 2016.

Marine Lt. Gen. Vincent Stewart, director of the Defense Intelligence Agency, added the Islamic State will probably conduct additional attacks in Europe and then attempt the same in the U.S. He said U.S. intelligence agencies believe IS leaders will be “increasingly involved in directing attacks rather than just encouraging lone attackers.”

The others threats were pointed by the US intelligence generals:

North Korea has expanded a uranium enrichment facility and restarted a plutonium reactor that could begin recovering material for nuclear weapons in weeks or months, Clapper said in delivering the annual assessment by intelligence agencies of the top dangers facing the country. He said U.S. intelligence had assessed that North Korea has expanded Yongbyon and restarted the plutonium production reactor there. North Korea has been operating the reactor long enough that it could begin to recover plutonium “within a matter of weeks to months.” At the moment U.S.-based experts have estimated that North Korea may have about 10 bombs, but that could grow to between 20 and 100 by 2020.

Clapper said that Pyongyang is also committed to developing a long-range, nuclear-armed missile that is capable of posing a direct threat to the United States, “although the system has not been flight-tested.”

North Korea “probably remains capable and willing to launch disruptive or destructive cyberattacks to support its political objectives,” he said.

Moscow “is assuming a more assertive cyber posture” that is based on its willingness to target critical infrastructure and carry out espionage operations even when those operations have been detected and under increased public scrutiny, Clapper said.

On Afghanistan, Clapper said the country is at “serious risk of a political breakdown during 2016.” He said waning political cohesion, rising activities by local powerbrokers, financial shortfalls and sustained attacks by the Taliban erode stability.

On Syria, Stewart said he does not think the Syrian government of Bashar Assad is likely to collapse or be defeated in the near term because of increased support from Iran and Russia. He said Assad’s forces will likely regain key territory in some key areas. “He certainly is in a much stronger negotiating position that he was just six months ago,” Stewart said.

Based on Congressional records

Tags:Clapper, Intelligence, the us, Vincent Stewar