The Israeli intelligence community fears that confidential data that has been exposed to the US will be leaked to Russia and from there to its close ally, Iran. 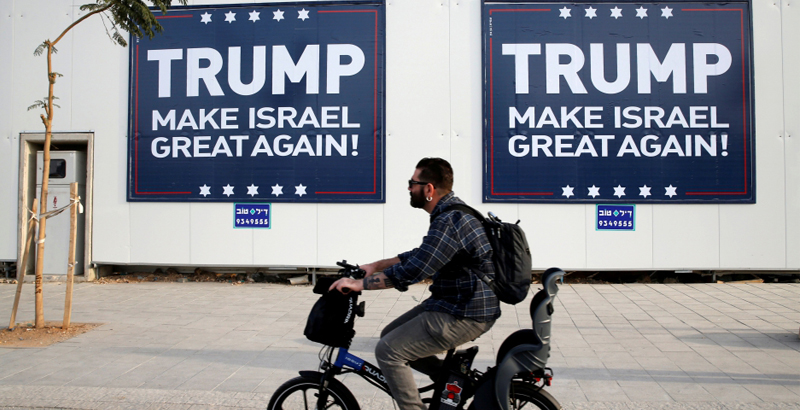 Israeli media claim that Tel Aviv is scared of a leakage of confidential data to Moscow and from there to Tehran, the Independent newspaper reported, citing an alleged secret meeting between Israeli and American intelligence officials.

According to the newspaper, the Israeli authorities fear that exchange of confidential data with the US can lead to the fact that Russia and Iran will get this information. In the past 15 years, the US intelligence has obtained some part of Israel’s top-secret information, which can be compromised after the inauguration of US President-elect Donald Trump.

The US President-elect is known for his good attitude towards Russia and Russian President Vladimir Putin, who, in his turn, gets on well with the Iranian authorities. According to Israeli journalist Ronen Bergman, the secret meeting between officers of the American and Israeli intelligence was held recently.

Sources told the journalist that Putin has “leverages of pressure” over Trump, as well as American intelligence officials warned their Israeli counterparts that they should “be careful,” sharing confidential data with the White House and the National Security Council. In order to avoid the leakage of secrets of Tel Aviv to Teheran, the Americans also advised Israelis not to transmit secret information to Washington until it becomes clear that nobody blackmails Trump, and he does not have inappropriate for a president relations with Russia.

If Israel’s confidential data was not kept confidential, this would be a serious danger for the national security of the state – since the early 2000s, the cooperation between the Israel and US intelligence communities has been intensified. According to reports, most of the joint operations between the two countries’ intelligence communities were directed against Iran, and a small part of them – against Hezbollah and Hamas.

Aren’t they pathetic, considering that Israel and Russia have no problems with each other.

Yeah, they actually improved trade relationships with us while sanctions cleared markets for them =D

Yeah, I don’t know about this. I can seek some wonk doing it but, it would amount to nothing.

Keep in mind that this was reported (according to Intelnews.org) by “…Ronen Bergman, senior political and military analyst for Israel’s largest-circulation daily newspaper, Yedioth Ahronoth…” so you can probably take it with a grain of salt. It’s equally likely that this was a fabrication merely meant to ‘send a message’ to Trump – and a pathetic fabrication at that. Israel has iron-fisted censorship policies and regularly uses its media for internal/external state propaganda – even worse than the U.S. if you can believe that. Bergman could have been spoon-fed this story by Israeli spooks. His article (I believe originally) appeared on Ynet News in english here.

On past record the sensitive information compromised in US-Israeli relations has been in exact opposite direction, ie, systematic Israeli theft of US technologies – see Jonathon Pollard etc – and in 1980’s, Israel actually traded US intelligence in exchange for securing release of Soviet jews to boost numbers of Israeli citizens. So yeah, grain of salt on this tale.

Speaking of chain of command and subordination, conspiring to deprive President of the United States of crucial information and keeping him out of the intelligence’s loop as command in chief is very serious act of subordination and as such is bordering if not flat out criminal.

This is what happens 1) when you have too many U.S. intel lawyers in a room that can weasel-word their way out of subordination charges, and 2) U.S. intel employees that are unapologetic Israeli-firsters, i.e., agents of a foreign power.

The logic (and weasel-wording) no doubt revolves around these ‘American intelligence officials’ merely warning Israel from sending sensitive future intelligence. They (and Trump) would have no idea if that information is vital to the interests of the U.S., so they are not actively withholding such information from the president, they are just suggesting our so-called ally – Israel – not volunteer sensitive information. Common sense would suggest that the intelligence community – essentially employees of or reporting to the executive branch – should not be sand-bagging the future president because they don’t trust him. The point is moot anyways because they are all in the final days of their employment/appointment and are likely getting purged on day one by Trump’s team. Israel will wait and see just like the five-eyes nations. What these traitorous American intel agents probably have done is tell Israel what the U.S. has on them that they can’t keep from Trump. It would have been a ‘heads up’ to Israel about the damage Trump could cause for them (and then Israel can decide if they want to assassinate him, I guess).

For what it’s worth, Trump can chose (via established executive privilege) what is in the interest of the U.S. with regard to intelligence sharing. If he decides to route anything the Israelis send us directly to Moscow, then that is his perfect right and priviledge. The ‘American intelligence community’ many not like it, but they are employees and appointees. The president gets to overrule them at his discretion. That’s the way it works.

Normally, I wouldn’t think Israel has anything to worry about since Trump and his cabinet seem to be pretty ardent Israeli-firsters and eager to start a war with Iran (whether for Israel or ‘just because’ or both). What probably does worry Israel is that Trump sees the U.S. relationship with Russia being far, far more important than that of a parasitic, apartheid nation in the Middle East. Trump won’t like Israel extorting him to do things under the threat of an Israeli nuclear strike against Iran. That will surely piss off Trump, who’s ‘art of negotiation’ depends on him holding the upper hand.

And most of all, Israel does not want Trump to inform Russia of the U.S.’s long-standing technical and material support for Israel’s nuclear (and chemical/biological) program. Russia has spies just like everyone else, but Putin would probably blow a gasket if he knew the exact extent of U.S. nuclear proliferation via direct aid to Israel – for decades and in secret. And rightfully so. This is the most egregious destabilizing act by the U.S. out of any nuclear-armed nation on earth ever. Russia will not want Iran to seek a balance of nuclear capability with Israel (compounding proliferation) but Putin will probably have a stroke when he finds out how foolish the U.S. has been and exactly how many nuclear arms we have provided to Israel.

And now “(and chemical/biological)” , give me a break! I am checking TV now for great science fiction movie.

1975 South African-Israeli agreement. Project Coast. Weizman Institute of Science. Belgian Congo-Zaire regime and Israel’s Rhodesia bioweapon playground. Secret Israel funding the Roodeplaat chem/bioweapons lab of Dr. Wouter Basson (South Africa’s own Dr. Mengele). Israel’s quest for Arab- and Black-selective bioweapons for ethnic cleansing on the cheap. Nes Tziyona Biological Institute. If you can’t find any good SciFi, then Google any of these and ignore the tsunami of nutjob conspiracy sites that come back. In all that tin-foil hat nonsense, you’ll find plenty of nuggets of the truth. Don’t expect CNN or NYT citations – they still insist Israel is a non-nuclear nation that wouldn’t ever use bio/chem weapons.

US is on an ongoing bases breaking its own laws. It is against the Federal law in US to support the country in any way which obtains nuclear weapons in violation of the UN charter and Treaty on the Non-Proliferation of Nuclear Weapons.

Israel started investigating the nuclear field soon after its founding in 1948 and with French support secretly began building the Negev Nuclear Research Center, a facility near Dimona housing a nuclear reactor and reprocessing plant in the late 1950s. Israel built its first nuclear weapon in December 1966 with the help of France (not US).

You think public knows but not Putin? Putin knows. Russian knows everything that is important to know.

Where do you think the Khazarain fake-jews came from? Avigdor Lieberman ; born Evet Lvovich Liberman, Russian: Эве́т Льво́вич Ли́берман, was born on 5 July 1958 in today Moldova. He is Israeli Defense Minster.

And yet you believe this story! Are you serious?

interesting how the establishment will do anything to stay in power. This makes them similar to a certain group of ‘religious’ criminals currently active in the middle east.

While being a federal employee assigned to do an intelligence job does not do it deliberately is a felony .

At some point Trump will have to decide between Israel and Russia, since they are on opposite sides of the Syria issue. My gut feeling is that his greatest intelligence problem will be keeping his communications with Russia from Israel, since he has hardly mentioned Israel since the election.

Wow, What is this ? Is the US intelligent system against its own president ? I think, Trump must fire all of those people involved in this statement !!, and send them to Israel.

Israel is a terrorist state like ISIS. Israel are snakes, inwhich country they enter they bite every one in that country. They would never give any benefit to anybody. Only God help those who help themselves.

Jews are getting worried. Good. Paranoia leads to mistakes. Sooner or later Israel will trip up.