According to an unnamed source of CNN, Syrian military and chemical experts discussed preparations for a chemical attack in Idlib last week. 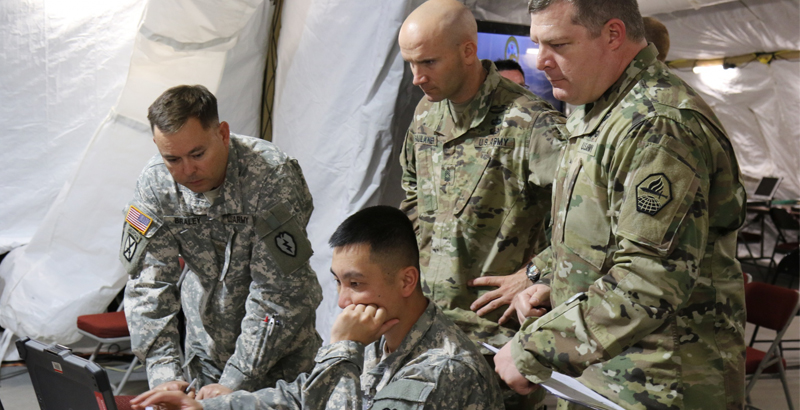 US military and intelligence have intercepted communications of Syrian military and chemical experts, while they were discussing preparations for a chemical attack with usage of the sarin nerve agent in Idlib province, the CNN TV-channel reported, citing an unnamed senior US official.

According to the TV-channel, the data was allegedly a part of an intelligence review, conducted within a few hours after the alleged chemical attack. US officials have stated that there is “no doubt” that Syrian President Bashar al-Assad is responsible for the attack.

According to the CNN’s source, Washington did not know that the attack would take place. As the TV-channel noted, the US collects huge amounts of information in countries such as Syria and Iraq, but does not process these data until an event that needs to be analyzed on their basis occurs.

CNN also reported that at the moment, there are no intercepted data, indicating the direct responsibility of Russian military for the events in Idlib. According to the TV-channel reportage, the US official suggested that “the Russians are more careful in their communications to avoid being intercepted.”

Now, Washington claims that a unit of personnel, associated with chemical weapons, has been re-established by the Syrian government, as well as that this unit gets outside help. “We know they have the expertise. And we suspect that they have help,” CNN quoted a US military official.

“We know the Russians have chemical expertise in-country. We cannot talk about openly any complicity between the Russians and the Syrian regime in this – in this case, but we’re carefully assessing any information that would implicate the Russians knew or assisted with the Syrian capability,” the official added.

While CNN continues to claim that the Syrian government forces were an organizer and executor of the chemical attack in Idlib, an analysis of a declassified intelligence brief, released by the White House on Tuesday, have indicated that it does not contain any real proofs of the Syrian government’s involvement in the attack.

Citing some unnamed sources, the TV-channel forgot to mentioned the declassified intelligence brief and conclusions, made by MIT professor Theodore Postol on its basis, according to which “we again have a situation where the White House has issued an obviously false, misleading and amateurish intelligence report.”

Israel did that and blamed it on Assad!

“but does not process these data until an event that needs to be analyzed on their basis occurs.” Translation: Until we need to make shit up!

Exactly. Instead to present this ‘evidence’ in the UN (instead of hiding behind photos of dead children) before their missile attack, they waited for 10 days to send it to CNN??? Bullshit. Nothing but cheap lies and fake news.

I know US, UK and Israhell do chemical attacks on Syrian and then they blame Syrian for these attacks.

Obvious hoax, not that the Intel isn’t true, just doesnt prove what they say it does. Much like the presence of mig22 doesn’t prove Syria dropped gas, presence of CW weapons in any military is important, especially when the rebels/isis possess and use such weapons. Nonsensical, nonproof proof. Best indication you are being lied too is fake evidence, and real evidence used to prove what it does not.

Exactly. Reagan allowed creative editing of intercepted radio between the fighter and ground control in the KAL 007 incident to make it look like the Russians intentionally shot down a civilian airliner and played it before the U.N. The full transcript showed that they thought it was a spy plane and had tried to signal it http://www.consortiumnews.com/archive/lost20.html

Well apparently US inelegance and president have reviewed the data and for sure they know Assad did it. funny thing is that they saying evidence is classified and can stay in vault for 60years before they unclassified. This smell of bulls**t to me as you have evidence but no one allow to look at it and we have to take US word. OK dream on.

If CNN said that one can trust it for sure

Unfortunately there are literally millions of people waiting ready to sell their dignity, name and honour in public for a handful of shekels, and it is going to get even worse with all this “liberalisation” going on… The whole of West has lost credibility since the 90s

Ya, a unit for decontamination and disposal of what the enemy may have.. Myths are easy to create if only part of the story is used.

Can’t be much of a ‘chemical expert’ if that attack was the best they could come up with. A single rocket landing in a strategically unimportant area where troops can’t overrun isn’t a viable plan for a chemical attack. If this was a real military plan for a chemical attack where were the Syrian soldiers trained and equipped to fight on a chemical battlefield? Does Syria even possess NBC capable vehicles? If I were Assad I’d be back on the phone to my “chemical expert” and ask for a refund.

It wasn’t even a rocket, just a short piece of pipe crushed from an outside explosion.

The US is trying to do damage control, and not very successfully

I read that report too. I was just following the US storyline.

Yes but most people brain dead enough to understand that fake sarin attack even they didnt notice air rocket doesnt big enough quantity to bring sarin that able to take out one neigbourhood block then smashed pipe that they said sarin rocket oh come on how stupid the world they thought, the most stupid one they allowed civilian wander around that thing and even touch that thing with minimal safety equipment

The general public always believes what they want to, and they like to feel good about themselves and their tribe. It’s why the narrative of American Exceptionalism is so appealing to the American public.

They don’t care about the facts that much if it upsets the narrative of being the chosen ones who are saving babies. It’s why governments, especially democratic ones, lie so much to their own people.

Syria does posses t-82, t90. But thats beside the point, the gas was dropped far behind enemy lines. It was impossible for the SAA to attack there in the time it took for the gas to dissipate. A perfect environment controlled by white helmets(British intelligence proxies to jihadists) and al Qaeda.

Hahaha, if saa want to use cw they might be use it at isis, especially the city that located in the middle of no where like palmira where there are no civilian around even there are civilian they will be labeled as isis supporter, so bombing them and gassing them didnt give you anything wrong with it like american bombing civilian in mosul, but saa still taking and retaking the city with conventional weapon, so its nonsense if they done that

I think it was a couple of old friends having a nice chat over the phone. ?

So, there was a conversation, but no actual details, which the US government has, of what was said. And this is proof of what?

it’s possible, especially if Turkish SIGINT intercepted and used Syrian army callsigns and made up the entire pantomime.

I am really astonished!!

These news arrive just one week after the events? IT IS VERY SUSPECT.

if really US had these informations (and proof of it…. because up to now are only words) could ask for an immediate action through UN. It is strange that nobody is pushing for a true OPCW investigation….. something to hide?

CNN?: NO SUSPECT THAT HERE ARE FAKE NEWS CNN is the world leader in the production of fake news.

EVERYTHING PUSH IN THE DIRECTION OF FAKE NEWS

Only one idiot (or few idiots) could think that this news are true.

TOO MANY DIFFERENT VERSIONS OF A STORY MAKE THE REAL STORY UNDISCLOSED. A REASON MORE FOR AN OPCW INVESTIGATION

Please stay on the Facts:

A) americans attacked without UN and their congress authorizations

B) WH are not doctors so they staged a movie without the base knowledge about CW (in fact they are terrorists actors masked by doctors) Every skilled chemist knows that the Sarin has high volatility and is dozen of times more toxic than cyanides that means that if a person has been contaminated by this gas (also on the dresses) is dead and that every person that try to help him without suited protective suit and breathing apparatus is dead too. No chances to survive. So WH images of rescue without this hardware is only a stage, nothing connected to reality. So no sarin, it is a scam

C) SOHR (that is UK based and not in Siria) begin to spread fake news based on no knowledge of the situation but operating only as a repeater of the terrorists opinions. No proofs. Only voices of terrorists. NO facts.

I heard at least 6-7 versions of this event and none based on facts. Right are russians to ask for a serious investigation by OPCW.

Every person with basic intelligence is able to understand easily that no syrian cw attack happened in reality.

I’ll buy the delay because they explain that they can’t keep up with the volume of crap they collect unless there is an incident worth exploring but I don’t buy the rest of the story.

I remember well. What surprised me is the fact that Colin powell could keep in his naked hands without fear a bottle that (about him) contained WMD’s. It means he was sure that the bottle has nothing dangerous inside. So no WMD’s.

And we will never get the transcripts because that would reveal our methods, how convenient. How about the counter-evidence that the Syrians were using an alleged chemical depot one day after it was bombed, does that count for anything?

Which US intel service , is John Brennan still with the “Company” ?

I like Russian President Putin’s reaction to this part of the story the best. He said it was a ‘crock of sheet ‘. That was a great moment.

Reveal your sources – otherwise f&*% off!

Sure….and the moon is made of green cheese.

Yes they did! and “Hitler didn’t even gas his own people!” Perhaps this was an earlier conversation from when the US was in Iraq destroying WMDs?