The US intelligence community has “ample grounds for concern” about an ability of the White House to keep secrets. Close allies of the US are curtailing some of their espionage relations with Washington due to fears that the White House is too friendly to Moscow, and this development may have grave implications for international security, in particular in the area of counterterrorism, the Observer information website reported.

As John Schindler, an author of the article, noted, the US intelligence community has “nagging questions about basic competence” regarding the team of the US President Donald Trump, US spies just do not trust the White House.

According to the piece, the US intelligence community has “ample grounds for concern.” Though, only three weeks passed after the inauguration of Trump, the President has repeatedly antagonized US spies, “mocking them and demeaning their work,” while his personal national security adviser, the retired Army three-star general, who until recently headed the National Security Council, Mike Flynn, gave his preference to conspiracy-theorizing over intelligence facts.

Earlier, Flynn was fired as head of the Defense Intelligence Agency for “managerial incompetence and poor judgment.” Today, it became known that he handed in resignation as head of the National Security Council. Flynn admitted that he had not provided US Vice President Michael Pence with comprehensive information about the conversation with the Russian ambassador in Washington, which took place before the Trump’s inauguration. According to US media, Flynn and the Russian diplomat discussed an issue of lifting the anti-Russian sanctions.

“In the course of my duties as the incoming National Security Advisor, I held numerous phone calls with foreign counterparts, ministers, and ambassadors. These calls were to facilitate a smooth transition and begin to build the necessary relationships between the President, his advisors and foreign leaders. Such calls are standard practice in any transition of this magnitude,” the Flynn’s resignation letter reads.

“Unfortunately, because of the fast pace of events, I inadvertently briefed the Vice President Elect and others with incomplete information regarding my phone calls with the Russian Ambassador. I have sincerely apologized to the President and the Vice President, and they have accepted my apology,” Flynn wrote.

Retired Lieutenant General Keith Kellogg has been appointed to the position of the acting national security adviser.

US media harshly criticized Flynn. It was reported that a month before the Trump’s inauguration, during a telephone conversation with the Russian ambassador in Washington, a former military discussed possible removal of the anti-Russian sanctions.

Then he “misled senior administration officials about the nature of his communications with the Russian ambassador to the United States,” the Washington Post newspaper reported at that time.

According to American journalists, such talks might serve as a false signal for Moscow that sanctions can be weakened or lifted in the very near future.

The newspaper also noted that Flynn initially denied the reports, but then explained through his official representative that he does not remember that sanctions were discussed, but, at the same time, he “couldn’t be certain that the topic never came up.” As the Observer website stressed, Flynn “grossly misrepresented his numerous conversations with the Russian ambassador.”

According to the website, another evidence of the rising tension between the White House and the US intelligence community is a new report, according to which the Central Intelligence Agency (CIA) denied Rob Townley, a former Marine intelligence officer, selected to head up the Africa desk of the National Security Council (NSC), to see Sensitive Compartmented Information (SCI). The denial was, reportedly, approved by Mike Pompeo, the new CIA director, selected by Trump himself.

As the article noted, in addition, US spies have never liked Trump’s lackadaisical attitude toward the President’s Daily Brief, the most sensitive of all documents of the country’s intelligence community. According to the website, some such documents have been relieved in this way, but “there are pervasive concerns that the president simply is not paying attention to intelligence.”

In light of this, and due to worries about an ability of the White House to keep secrets, some of US intelligence agencies have started to withhold intelligence information from the Oval Office. During decades, the National Security Agency (NSA) had been preparing special reports, intended only for the president’s eyes, which contained enormously sensitive intelligence. However, according to Observer, in the last three weeks, the NSA has ceased to do this.

As the website noted, hiding of such information from the White House may be very significant, as the NSA provides about 80 percent of the actionable intelligence in the US government. According to the author, the US intelligence community will approach the Trump’s administration with caution and concern, until his team “clarifies its strange relationship with the Kremlin, and starts working on its professional honesty.”

Looks like the “intelligence community” is ready to commit treason, which this report seems to justify!

The US state is starting the hybrid war at home. finally!
http://orientalreview.org/2016/03/04/hybrid-wars-1-the-law-of-hybrid-warfare/

CIA will be culled from neocon influences, it will take a little time, but it will happen.

no chance, the neocons/Zionists have total control of the u.s.

Zionists are proxies of Vatican. They are a mask Vatican skillfully wears.
They are virtually modern day Vatican’s Knight Templars. They keep the
Dome of the Rock on Vatican’s behalf until the time comes.

They think they do, that makes them careless and vulnerable.

CIA is Vatican agency within the US government. It’s inner state. It will exist as long as US does. The only solution would be to liquidate them altogether however it’s not gonna happen.
Pence is the one who demands sanctions to remain until RU returns Crimea and has the backing of the Vatican. That’s the reason Flynn had to go.
Read this carefully:
https://www.rt.com/usa/377346-spicer-russia-return-crimea/

Russia is not going to return Crimea, if Trump wants to deal with the Russians he has to become more creative.

Flynn is just another victim of three unfortunate American political maxims: Loyalty is seldom if ever rewarded, hard work generally goes unnoticed, and no honorable action goes unpunished. Flynn should serve as an example to those who would attempt to drain the swamp……….Don’t bother to even try. 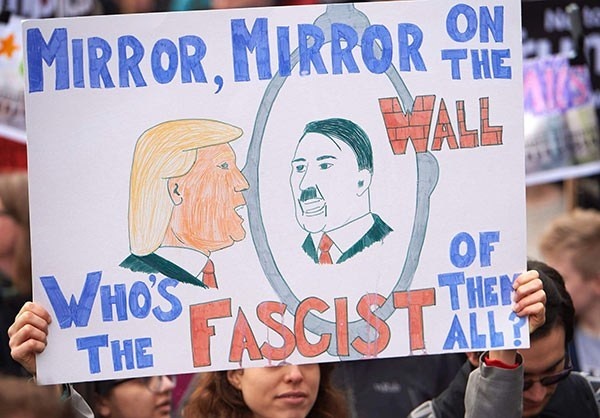 Could have been more polite.

That’s because they read Koran instead of the Bible

Fetched to far mate. Give a time. Those who have demonstrated on the photo were payed by Soros’ NGO $18 per hour.

I sense a coup de ‘eta coming. you reap what you sow, Washington d.c.

Remember that the CIA is the military arm of the COUNCIL ON FOREIGN RELATIONS, and that the CFR is the UNITED STATES SHADOW GOVERNMENT…The removal of Mike Flynn is another plot of the CFR to maintain total CONTROL of the NSA as they have for many decades, so that they can RUN THE UNITED STATES FOREIGN POLICY and NOT THE PRESIDENT ELECTED.