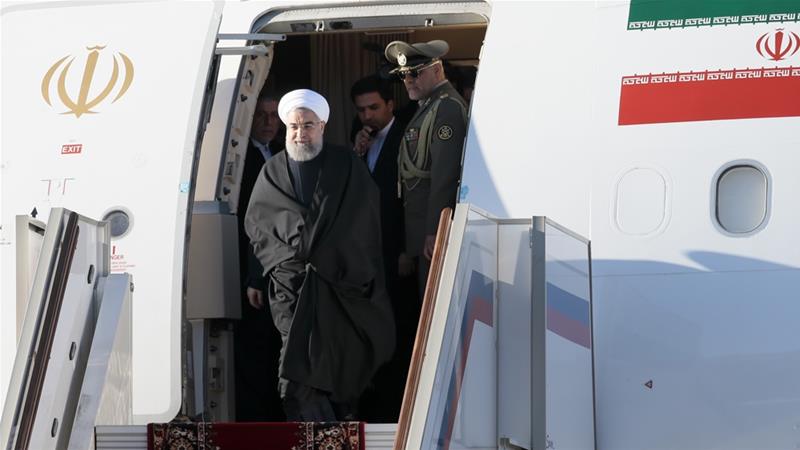 On May 24, the US imposed new sanctions on a few Iranian and Iranian-linked companies and a number of aircraft with a further targeting four Iranian airlines, according to the US Department of Treasury.

The US Department of Treasury targeted companies connected to Mahan Air and Meraj Air, as well as aircraft from Caspian Airlines and Pouya Air. According to the statement, these airlines transmitted weapons, fighters and money to Iranian allies in Syria and Lebanon.

“The deceptive practices these airlines employ to illegally obtain services and U.S. goods is yet another example of the duplicitous ways in which the Iranian regime has operated,” US Secretary of the Treasury Steven Mnuchin said in a statement.

The US also sanctioned three individuals, one from Turkey and two from Iran, who were allegedly linked to the airlines and aviation firms.

On May 22, the US imposed sanctions on five Iranians that allegedly had provided Yemen’s Houthi movement with military equipment.

“The United States will not tolerate Iranian support for Huthi rebels who are attacking our close partner, Saudi Arabia.  All countries in the region should be on guard to prevent Iran from sending its personnel, weapons, and funds in support of its proxies in Yemen,” the statement reads.

These sanctions come after the May 21 “basic requirements” announced by US Secretary of State Mike Pompeo. He threatened Iran with “the strongest sanctions in history” if Tehran refuses to comply 12 demands of a new nuclear agreement that could permit Iran to avoid sanctions, ILNA news agency reported.

Iranian President Hassan Rouhani rejected “basic requirements”, stressing that Iran would continue its “path”. He stressed that the era when the US could “decide for the world” had finished.

“Who are you to decide for Iran and the world? The world today does not accept America to decide for the world, as countries are independent … that era is over … We will continue our path with the support of our nation”, Rouhani stated.

Deputy Commander of the Sarollah Revolutionary Guards base in Tehran Ismail Kowsari claimed that the Iranians should “deliver a strong punch to the mouth” of Pompeo in response to his speech, the Iranian Labour News Agency reported.

“The people of Iran should stand united in the face of this and they will deliver a strong punch to the mouth of the American Secretary of State and anyone who backs them,” Kowsari said. “Who are you and America to tell us to limit the range of ballistic missiles?”

“History has shown that with the attacks on Hiroshima and Nagasaki, America is the top criminal with regard to missiles.”

On May 25, members of the Iranian nuclear deal held an official meeting over issues caused by the US withdrawal of the deal and new US sanctions imposed on Iran. Before the meeting, a senior Iranian official told reporters that until May 31 European leaders have to provide Iran a plan to compensate the US withdrawal and renewed sanctions, Reuters reported.

“We expect the (economic) package to be given to us by the end of May,” the Iranian official said. “I’m sorry to say that we haven’t (seen) the Plan B yet. The Plan B has just started to be figured out.”

On May 8, US President Donald Trump officially announced the US withdrawal from the Iranian nuclear deal and ordered to reimpose sanctions on Tehran. Countries, including other members of the Iran nuclear deal criticized this decision.

When is the world going to sanction usa, uk and israhell?

Soon I hope and we can all do out bit by not buying US or Israeli goods unless there is no practical alternative. I will not even use US branded restaurants, even if I am hungry :)

what the hell does this have to do with their nuclear program? and at the same time they wish for democracy to come to iran and they sanction things like this. the west is totally braindead

This lack of understanding make them total dead brains.

Since when economic terrorism has anything to do with “democracy” or any other good intention?! Sanctions like these are just declaration of war by any other name. The same goes for sanctioned Russia. That is just one very small step from shooting war.

Perhaps the US should get it all done at once, and just sanction the whole world.

Typical blackmail from the Snakes. Sanctions haha so pathetic, i wonder if these americans cannot do sanctions what would they do then? Suck it.